There is no water on Bull's Island

Barclay called me to remind me there was no water on Bull’s Island. “We’ll have to pack in enough water for the day,” he said. I had just finished working in the yard for an hour and had already drunk two bottles and was still thirsty. The forecast for Saturday was even hotter and there would be five of us. All day. I was thinking about taking our wheelbarrow on the hike.

BUTLER: “Last time you got all macho you ended up in the E.R.”

I was pulling out Brian’s big old backpack from the closet. We had used it only once on a three-day camping trip that lasted less than 24 hours due to bugs, my aging spine, and difficulties lighting a campfire in a chilly dawn. As I was looking at the pack, Karen called up from downstairs. “I just talked to Jerry!” (Barclay’s mom and Karen’s best friend) “She says there’s no drinking water on Bull’s Island!” 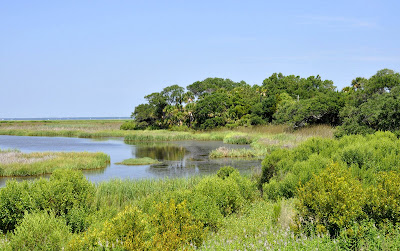 Bull’s Island is an exquisite wilderness preserve accessible only by ferry. Visitors are limited so we got to the ferry early, worried that the 4th of July weekend would be crowded. We hadn’t considered that almost everybody was more interested in hot dogs, fireworks, beer, and beaches than in slogging through alligator infested trails in 98 degree heat. Only two other people showed up so we had the island to ourselves. 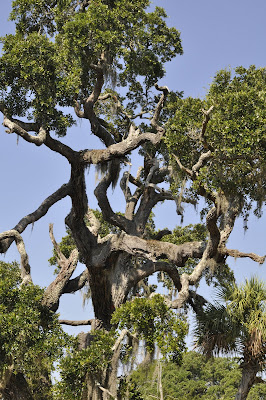 It was my daughter’s last day before returning to Boston and Jean, Karen and I were going with Barclay and Jerry. I had really been looking forward to it...until I’d completed the first 100 yards of the twelve miles Barclay had mapped out. I didn’t mind the long slim black snake that scurried away before I could get out the camera or even my first encounter with a very large Copperhead which I also missed photographing due to the fact we were all frozen in our tracks. What gave me worry was the weight of a ton of water bottles on my shoulders. 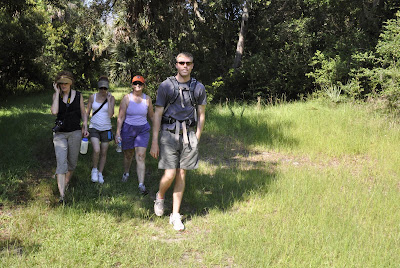 Of course Barclay was striding along under the same weight. But he was 40 years younger and had spent the last year tramping all over Northern Kenya. After the first mile, I started drinking water like crazy – not because I was thirsty but because I thought that empty water bottles would be lighter than full ones.

BUTLER: “Try to keep from dripping sweat into the camera’s eyepiece.” 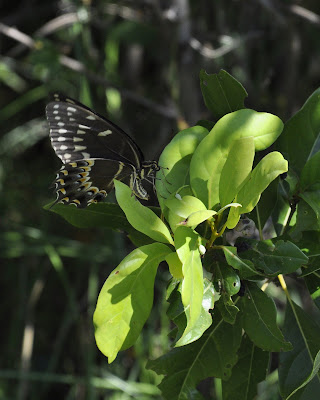 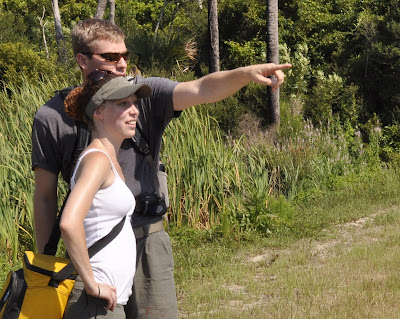 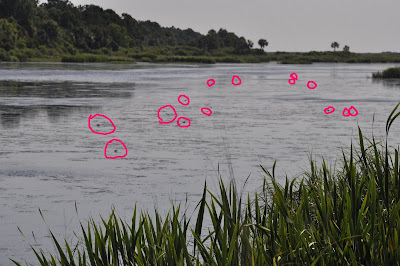 Ah for a cool dip!
Oops! Maybe not, after I noticed the obvious gators.

And the less obvious ones. 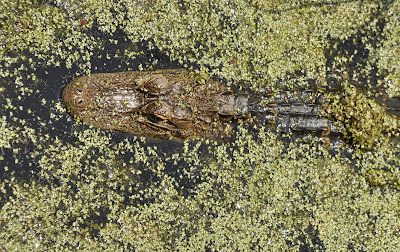 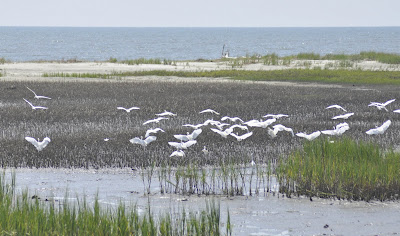 Egrets taking off! They probably don't like the alligators. 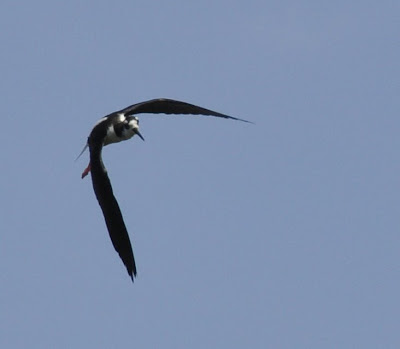 The mystery bird! I couldn’t find this one in my Audubon Guide? 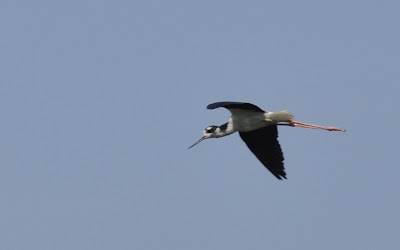 Help? Does anyone know what kind of bird this is? 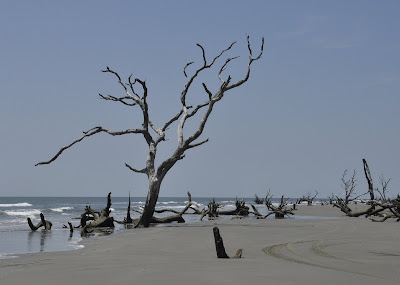 And finally, after six miles -- Boneyard Beach
Good for swimming and shots of driftwood. 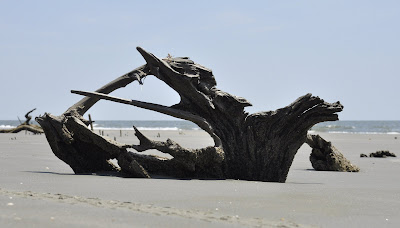 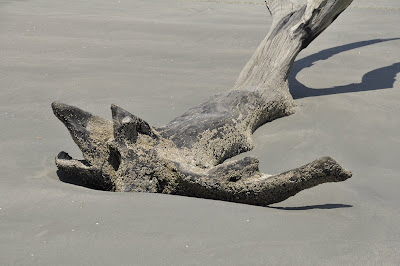 The six miles back would have been easier because we had emptied ¾ of the water bottles. But, by then, my muscles felt like Gumby and sweat and salt water had converted my shorts and underwear into a fabric that resembled Velcro against my inner thighs. Meanwhile, Karen and Jerry are laughing about their childhood and Barclay is telling Jean how he usually avoids the ferry and kayaks over and back – 90 minutes each way! I consider throwing a water bottle at him. 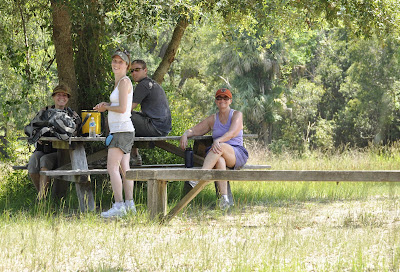 Back at last, drinking more water, and waiting for the ferry to take us home.

Why are these people still smiling?


The low angle of this photograph is due to the fact that I’m lying on the ground not even concerned about fire ants since they can’t possibly do more damage than the sunburn, mosquitoes, and underwear chaffing has already done.

Riding the ferry back, we were treated to a large school of bottlenosed dolphins. They kept popping up and staring at us. The naturalist driving the boat said they were curious about us but I knew better. They were playing a game with my beat-up and exhausted nervous system. They’d pop up in an unexpected place and as soon as I turned the camera on them they would duck their heads under and giggle madly. I finally ran out of memory card and never did get a single shot with a dolphin face in it.

that I was still alive. 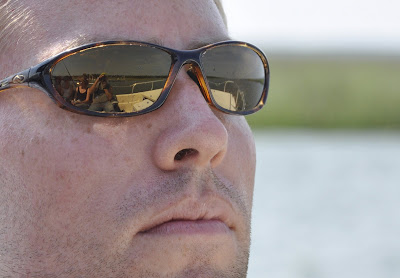 He's not even sweating!

So, finally, the naturalist driving the boat, smiled, opened a large ice chest and offered us all big…oversized…cold bottles…of water.

I was the only person on the boat that did not take one.

TUESDAY
Finally found enough strength in my fingers to post this.

Posted by Bagman and Butler at 2:36 PM