Art, Eisenhower, the Army, Obstetrics, and World War I

I have been planning to start a 4 part series on my grandfather (Grandee, to me) on the first of December.  I thought it would be simple but I also decided to see if I had any old stuff out in the shed and...

KABOOM!  I knew lots of stuff that I had sold, lost, or given away over the years but had forgotten stuff I've lugged around.  So I keep finding things that don't quite fit in the series as I had planned it.  So here is an out-take.  (Actually I'm afraid the out-takes will be better than the series)...at least more spontaneous.

I do wish I’d asked more questions when I was growing up with my grandfather. I wish I’d listened more. There is so much about my grandfather’s history that I know only in bits and pieces but not how they connect.   Like the war.


He joined the army near the end of World War One. I don’t know what he did in the war except that he told me that he never saw any action. I know that he was in England and France. I even found his passport! 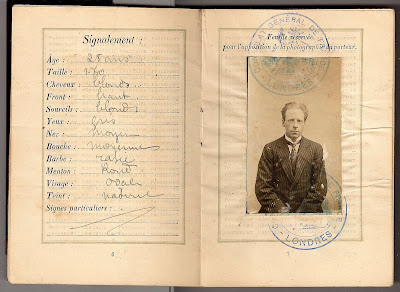 I also know that he served in the Tank Corps under Dwight Eisenhower, long before he became president. Eisenhower, that is.  He -- my grandfather, not Eisenhower --designed a logo for the tank corps and worked with some other soldiers to make a sign for the headquaerters. 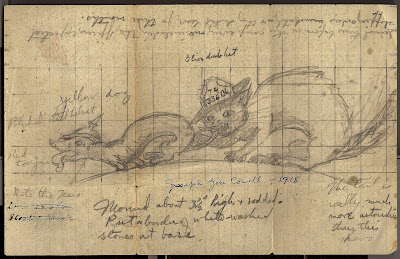 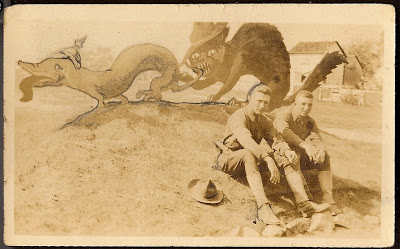 I remember this because when I was 7 or 8 (or maybe 9 or 10) before we moved away from Washington, Grandee took me to Eisenhower’s retirement home in Gettysburg to give him these little documents. An aide came out to receive them and later Eisenhower wrote, through another aide, a note returning them with thanks.

Although my grandfather said he never "saw action," he saw the results of action in France and said he'd never forget it.   In the shed I found some photos he had taken. 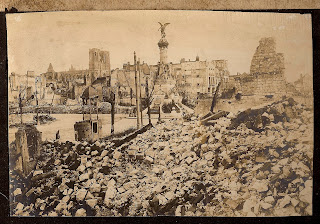 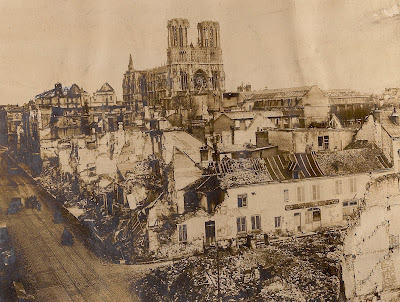 Years later he painted a very large painting of Rheims Cathedral, beautiful even in destruction. 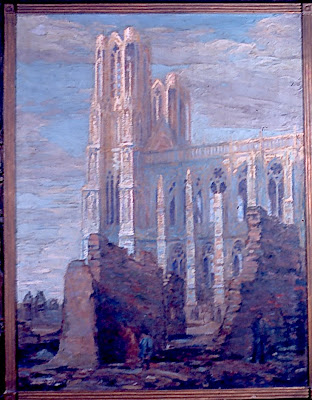 Some people used to ask him why he didn't show it in it's glory and he used to say that he felt it had glory even in destruction.  I wish I had been a better photo-copiest when I shot many of his pictures along time ago because I did not do justice to the frame.  He hand-carved all his frames and this was magnificent but I can't find any slides that show it.  Except for this detail of at the bottom.

This was a wall-sized painting, probably 6 feet tall.  It was one of several that my grandmother and I could not get placed in museums after he died and then, after she passed away, I had to sell them because (a) they were too big for me to carry around or hang, (b) because I was an alcoholic and needed the money, and (c) because I was an idiot.

But back to my grandfather, I don’t know what Grandee thought about war before he joined the army or why he joined in the first place, but I know he hated war afterwards. In fact during a short and very a strange surrealist period in his career – nothing like the vast majority of his work – he painted an almost Hieronymus Bosch-like anti-war painting. 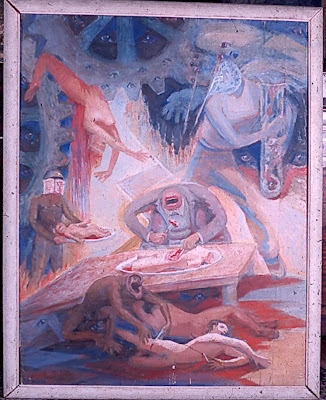 It is probably my lack of knowledge but it seems to have been a strange army and a strange war because Grandee also seemed to have spent most of it studying art under various masters in Paris and London. 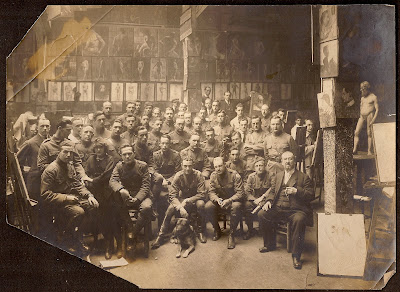 And it appears that a lot of soldiers were doing the same thing! Everyone was in uniform!  (Well, not everyone).   I looked at this closely and finally found my grandfather. If you blow it up (and don't look at the model!) my grandfather is in the back row, his head covering the lower right hand corner of the painting of the model's face.

Finally, unlike today’s army, he brought his wife (my grandmother) along with him. And while he says he never saw action and that the war was almost over when he got there, they always told the story about how my mother was born in London in the middle of a German Zeppelin raid, with bombs shaking the windows of the hospital. 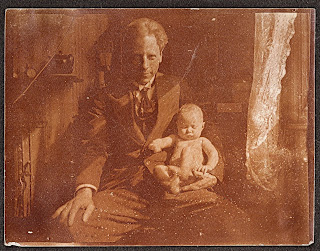 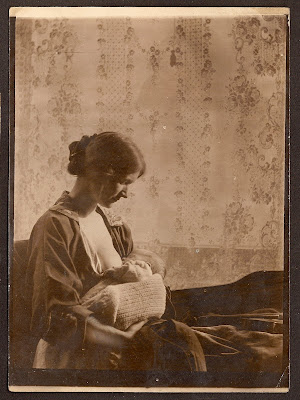 I also realized he was a pretty damn good photographer as well.  Long before the days of digital.  1914-1915?  What kind of camera did he have, I wonder?

And he must have been in London (and /or France) for several years because in the picture below, she is clearly no longer a newborn. 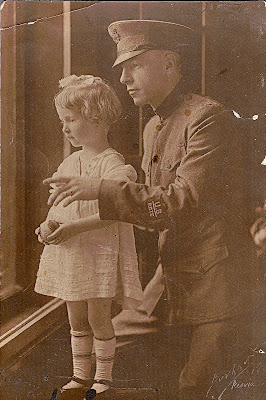 Yes, I really wish I had asked him more questions about that time in his life.  There must have been a wealth of incredible stories.
Posted by Bagman and Butler at 6:22 PM