Friday Shootout -- Our big thing or something like that

This will be the fastest, rushed shootout I've ever posted.  I didn't think I'd even get the time this week.  Crazy week.  But I'm driven to post something.  So this is being written and posted on the run.

I can't remember the exact theme title but it has to do with what Charleston is known for.  I was going to talk about lots of things, but I guess we are known mostly for being the birthplace of the Civil War.  Nobody argues that slavery sucked.   Even the deep seeded Southerners here.  Well, at least they "say" they think racism sucks.  But they sure do worship their heritage and claim it was about not having the government tell them what to do...which they still hold true.  Frankly, I don't like government much either. 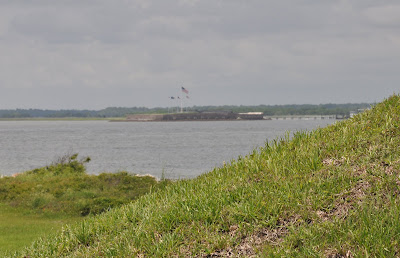 Fort Sumter -- out of focus but the best I've got

And it is a MAJOR tourist attraction

I think I've mentioned it before but lots of folks get into "reenactment."  They take it seriously, particularly in the fall during the reenactment of the Battle of Seccessionville which wasn't actually at Boone Hall Planatation but its a good place for tourists to come and see the boys play.  They draw straws for which side they will reenact and then they get to 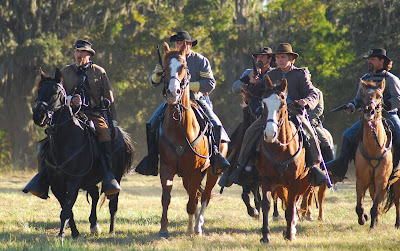 ...some get to pretend they were shot...

They tell me this is the worst role to get because you have to lie absolutely still while mosquitoes, gnats, flies, and ants have a field day! 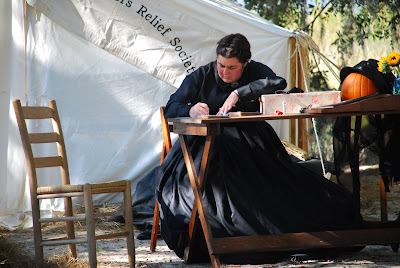 Charleston is also really well known for the Hunley Submarine.  I didn't known this until a few years ago but while Charleston was under a blockcade during the Civil War, the Confederacy invented a submarine run by hand cranks.  The first tests sank, drowning the sailers testing it.  But even so, one night seven guys led by Dixon (no time to look up his first name) went out and actually rammed a tethered bomb into a Union boat.  The Hunley, however, sunk.  A few years ago they actually found it, raised it, and took it apart spoonful by spoonful, extracting all of the bodies.  Then they put it back together, carefully cleaned and soaked it in solution to preserve it.  It is now in the Hunley museum here...a big attraction.

One more quick story -- there was a legend about Dixon that his life had once been saved when a Yankee bullet was stopped by a gold twenty dollar piece his girlfriend had given him and he carried the Double Eagle everywhere he went.  And yes, while excavating the sub they found the gold coin and it had dent from a bullet mark in it.

Anyhow, they eventually gave the crew a reenacted civil war burial that was incredible because it really had the feeling that the 1860's came from another world.  The parade was huge.  The photos are terrible because they are stills from a poor quality video.  But here are some of them. 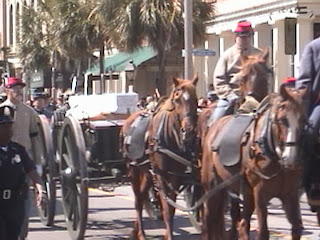 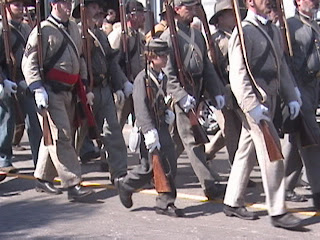 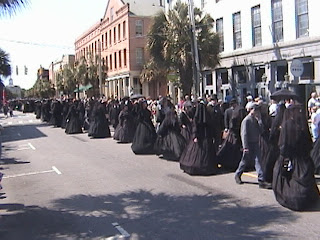 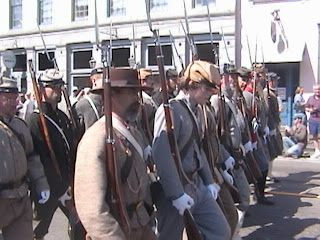 I need to post this and get back to a million things...if I have a moment I'll add an abstract manipulation I did of one of the video pics...but maybe  not.

I really hope I get a chance to look at the other shootout stuff tomorrow...but don't know when...maybe by Sunday. 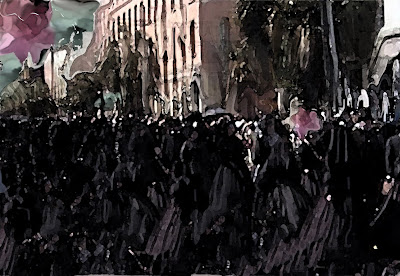 Posted by Bagman and Butler at 3:40 AM