Today's theme was chosen by Rebecca.

I've attended many different churches, but I don't seem to have taken pictures of them.  So this will probably be a somewhat odd shootout.

Actually, the first thing I thought about was a verse from Thessalonians (yes, I had to look it up), that suggests -- "admonishes us" is probably more Biblically sounding -- to pray without ceasing or pray continually.  I've given that some thought over the years.  Pretty quickly, I decided that I couldn't do that if it meant formal prayer.  I don't think I do formal prayer very well anyhow, let alone continually.  But maybe it is more of an attitude.  Don't think I do that very well either.  But the 12-Steps of Alcoholics Anonymous has helped over the years. 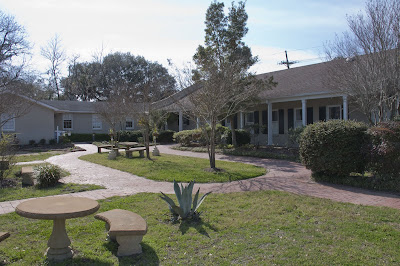 Until a couple of weeks ago when my A.A. Homegroup moved, this was the place where we met.   We always end the group by standing in a circle and saying the Lords Prayer, but just as important is the sharing and support that goes on during the meeting.

While I don't pray continually, I do throw out little blurts to God from time to time.  Sometimes more, sometimes less, depending on my state of mind.  Almost always when I'm driving and pass those little wooden crosses that some family has placed at the scene of a past accident.  "Dear God, bless that family. Amen."

I talk to God in bullet points -- which is strange for someone who writes such long wordy blogs.

Another place of worship, believe it or not is: 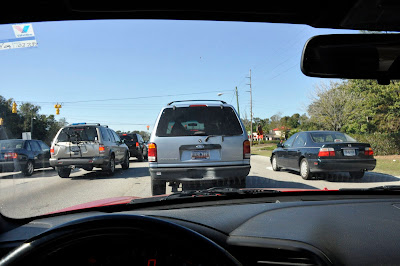 I don't know when I started this habit.  When someone would cut me off in traffic, I used to always lean on the horn and flip them the bird and scream at them.  But quite a while ago, I made a decision and developed a habit that is now pretty deeply ingrained.  Whenever someone cuts me off, my first thought is...

But within moments, my next thought is "Dear God, give that person a better day.  Amen."

Probably the most regular and constant place of worship for me is: 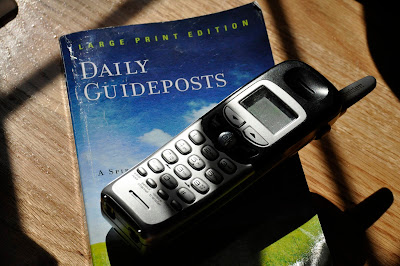 Karen, my wife, almost always leaves for work an hour before I do.  But whichever one of  us leaves first we are usually hurrying.  But once we, mostly she gets in the car she calls back on her cell phone (Yes, I know, I know...at least she isn't texting and she uses an earpiece.) and I'll read a daily reading from the book above.  Then each of us says a prayer -- whatever is on our minds.   It is one of the rituals we really enjoy.

Well, that's about it.  A fairly short shootout for me.  I can't resist, however, posting the photo below from a trip we once took to Italy -- from the roof of St. Peters.  I know that I've posted it before.  But it is one of my favorite photos and fits the theme so I can't help but post it again. 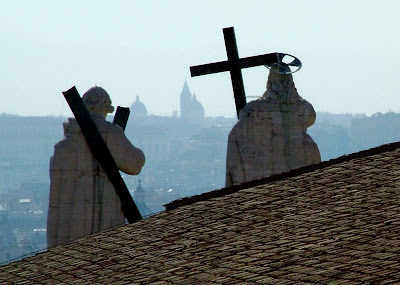 Posted by Bagman and Butler at 1:21 AM