BUTLER:  "Honestly, Mark, why do you try and get tricky with your titles.  You just could have simply titled this blog..."

...interrupted by Bagman who is wearing a loincloth made of kudzu leaves and leaping in a wild spinning dance...

BUTLER (contining as if he has not noticed): "...Pueraria Lobata."
BAGMAN (Jumping down on the floor to do a breakdance spin move) "La La Lobata!  La La Lobata!"  (Then his spin connects his head with the leg of my desk and he stops, lying on the floor trying to catch his breath.)

BUTLER (continuing in a scholarly manner): "And you should be careful, Baggie, my friend.  That Kudzu you are wearing in such a delicate area might take root.  It is a very dangerous plant and suffocates most of what it touches." 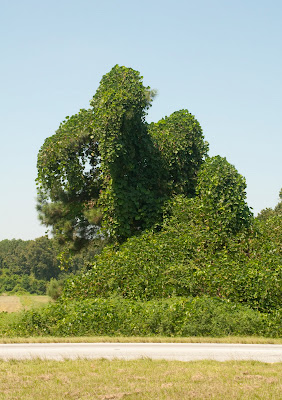 There are trees beneath these ghostly shrouds
trees that wonder quietly
where all the sunshine has gone... 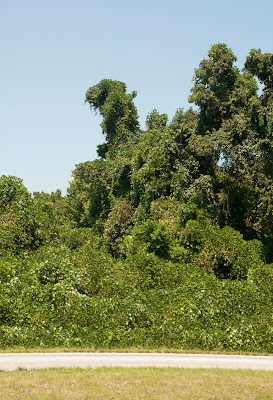 BUTLER: "Pueraria Lobata was introduced to the United States from Japan in 1876.  It spreads through both seeds and by attaching itself with nodes to other vegitation.  You can see it everywhere in the Southeast.  Despite the fact that nobody wants it, as a Japanese export, it has increased its market share more than Toyota, Nikon, Sony, and Honda put together.
BAGMAN:  "Hey!  I can't get this thing off me!  Help!!!!!
Posted by Bagman and Butler at 8:53 AM