BAGMAN runs in grinning and shouting: "Recognition at last for my favorite artist!  Maestro of the freight yards!  Leonardo Graffiti!"

Butler just frowns, shakes his head at Bagman, looks over at me and says, "You got anything?"

I like graffiti and have a couple of old shots and a couple of new ones, but I can't complete with Bagman.  Besides, wasn't it Salvador Graffiti"

BUTLER: "Not you too.  Just post some pictures so we can go back to bed." 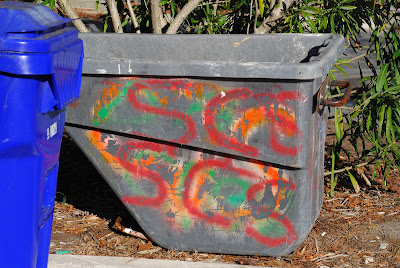 It was outside the building where I work.  I snapped it in case it was a gang logo but once I saw it, I realised it simply said "SCS" -- South Carolina Sign-painters.  If we ever need to commission any ugly signs.
I looked around my archives and found the next one from Italy, a great trip that is slowly fading in my memory. 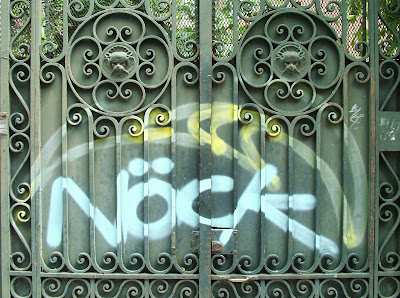 And the next one goes back further still to when I was shooting statues in Boston.   I'm not sure it qualifies as graffiti, but some college student probably thought the statue looked better with lipstick. 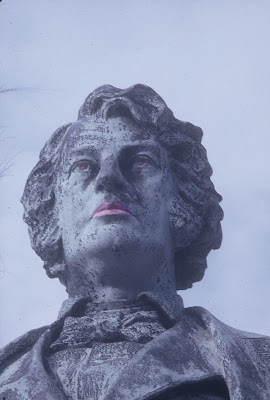 And the next one goes back even further -- 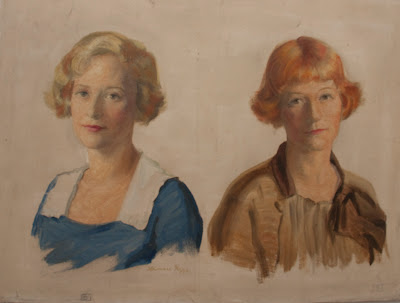 Well, I took the picture yesterday, but...
BUTLER: "That's not graffiti!  It's a portrait your grandfather painted of your mother and grandmother!"
No, no, Butler, you're not looking closely.  Look at the very bottom of the painting. 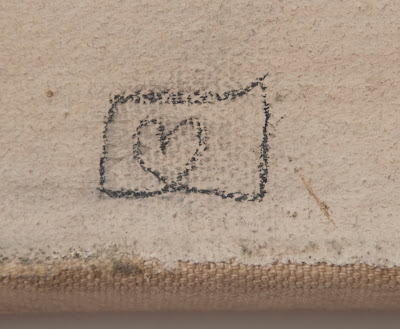 Way back when I was 7 or 8, I took  pencil and made graffiti on it.  My grandmother was mad at first that I would deface a work of art, but my grandfathers  (whose work of art it was) said he thought it was sweet and added alot to it.  If I ever get back to France I'm going to look more closely to see if little Billy Lisa scribbled any cute love marks on Mona's picture. 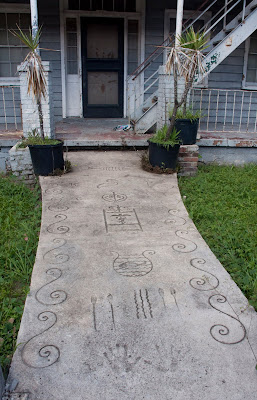 I'm not sure this qualifies as graffiti either but I did take it this week.  I need to post a couple of new pictures to prove that I still own a camera and not just a huge archive.  I was going to use this sometime  in a blog about Phillip Simmons.  Simmons was a Charleston, SC legend.  He did most of the great iron grill work in the city from a  little workshop behind his house.  He died a year or so ago and his house is now a small museum although it doesn't get many tourists because it is in the really poor side of town.  One of my colleagues at work knew him and wrote a story for our Diversity Newsletter and he and I went over and shot some illustrations.  But I liked the walkway.   If I get the time later this week, I'll show a little more of Phillip Simmons legacy.
And the final one is also some old graffiti -- 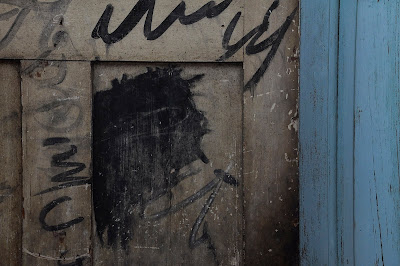 I think I posted this a couple of years ago but it fits.   This is graffiti that dates back to the end of the Civil War.  It is behind a staircase in Drayton Hall, one of the few surviving original plantation houses around Charleston.  It was supposedly spared destruction by Union troops because it had been transformed into a Smallpox Hospital.  My guess is that this was written by one of the doctors because even 150 years later nobody can read doctors' handwriting.
BAGMAN:  "I can read it perfectly!  It says '5 cc's penicillin and apply leeches as needed'."
BUTLER:  "Penicillin wasn't discovered until 1928.  Shows how much you know!"
BAGMAN:  "Shows how much you know...shows how much you know...big whoop, you geek."
I leave Bagman and Butler to their little squabble and head off to bed.
Posted by Bagman and Butler at 12:52 AM