This morning, I banged my kneed on the fender of my car because, instead of watching where I was going, I was staring at the ceiling, waiting for Aragog to drop from the garage door opener onto my head, quickly boring a small hole in my cranium and inserting black widow poison.

But I remain calm, trying to pretend that I am staring in one of those nature programs on television where people are dropped into the middle of swamps or out in deserts and have to survive on grubs and skunkweed alone.  (Unless they are given candy bars on breaks by the camera crews that I assume are following them.)

But in my garage there is no camera crew, just me.

BAGMAN: "But there are candy bars!!!"

Anyhow,  in comments yesterday, Tabor had said she didn't know they had open air webs, so I was intrepidly going to investigate.  Since Aragog had run off after our first encounter, I was not sure that any web remained.   But as the saying goes, "An old web is better than no web at all." 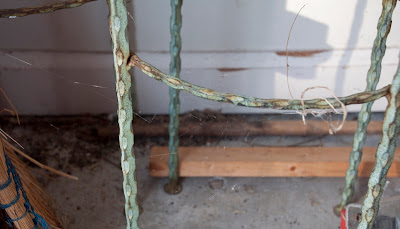 If you blow up this picture and look closely, you can see the black widow's web.   Of course, if you are like me -- "so many blogs, so little time" -- you won't blow up the picture, so in the spirit of nature shows, I'll make a graphic. 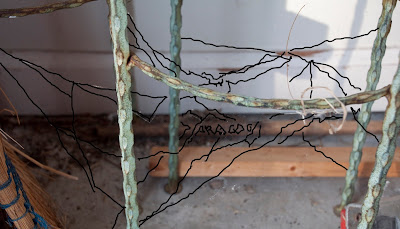 BUTLER: "Your usuallyy steady hand seems to be a bit shaky with the lines, don't you think?"
BAGMAN:  "He was hearing the eight-beat cadence of footsteps above him."
Actually just too much coffee too early in the morning.  But anyhow, there is what is left of Aragog, the black widow's web.  The spider guide says that they prefer dark places and have rough webs with funnels that lead to their nest where they hide out most of the time, protecting their eggs.
Suddenly certain words reverberate down my spine (or up my spine -- chillbumps happen too fast to determine direction):  "dark places, nest, hide, protecting eggs"    I'm suddenly wondering if Aragog ran away or whether she is watching me right this minute.  Oh yes, the word "eggs" bears repeating.
Karen's voice comes from the kitchen beyond the garage door.  "Have you killed the spider yet?"
"Not quite," I call back, my voice shakier than the lines I've drawn on the photo above.
I can almost hear a whisper from somewhere saying, "Come closer, my dear.  I'm waiting for you."
to be continued....
Posted by Bagman and Butler at 6:17 AM