So, we arrived Saturday at "A Place at the Beach" at the Outer Banks.   The Outer Banks has a romantic sound to it -- wild and oceanic -- but Atlantic Beach is the southernmost part of the Outer Banks, named the Crystal Banks because it is more built up and touristy.

At least during the summertime.  This time of year, things are kind of slow here. 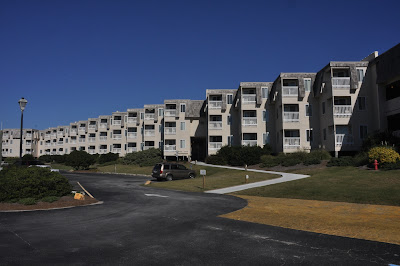 A Place at the Beach
Mostly I shoot in RAW which I can't work with until I get back to the Butler and Bagman Studio where my Adobe is located.  But I shot this in JPEG to  illustrate where we are.  Instead of A Place at the Beach, they should have named it Metropolis at the Beach.   This is only one of four tiers of condos that radiate out in 45 degree angles.  Walking inside is like a maze of wooden beams -- sort of like a a huge cedar prison or the inside of an anthill.
There must be well over a thousand small condos.  And if you check out the number of cars in the parking lot, you can tell that we almost have it to ourselves.  Although we did run into one elderly couple the other day.  They were trying to find their roon and had been lost for weeks.  We gave them some of our water and a couple of candy bars and told them we would send back help if we got out ourselves.
However, joking aside, we are having a good time.  The hot tub and indoor pool are operational and the restaurants that aren't closed for the season are the restaurants that the locals frequent -- which means better food at cheaper prices.
This afternoon we are taking a ferry over to Shackleford Banks which is uninhabited except for wild horses.  It is one of three islands where ferral Spanish horses run wild.  So perhaps I might get a shot or two to publish later.
Unless, of course, the horses have also closed their attraction because it is off season.
The afternoons are in the high sixties which makes bicycle riding enjoyable.
I'm going to get ready now for our wild horse expedition.   But I'll close with some good news.  I just saw a helicopter and a team of rescue personnel.   They were leaving with the elderly couple we had last seen on Sunday.   They were still walking under their own power.  But rumor has it that there is another family that is still lost in the catacomb hallways of  A Place at the Beach.  They have been lost for over two weeks although rescuers report finding a trail of breadcrumbs so are hopeful they will be successful in finding them.
Posted by Bagman and Butler at 9:48 AM