How really dumb jokes get born

Or:  An attack of stream of consciousness...

So I'm still half asleep and taking the dogs for a walk down the street -- my first task at dawn --  to keep them from going potty in the house.   Daisy is in the lead as usual and Annabelle, the mop-dog, is much slower because her nose attaches itself to the ground and drags like dead weight.

When suddenly, 75 yards ahead, Daisy and I both see a racoon crossing the road.  We both get excited but it is long gone before we get there and Daisy can run back and forth smelling where it crossed.

And by then, my mind has slipped like a broken clutch into a train of thought (which is like a stream of consciousness but more metallic) and goes like this:

"Why did the racoon cross the road?  Oh yes, that old joke about why the chicken crossed the road.  To get to the other side.  And then there was that follow up -- why did the something-or-other cross the road?  Rooster?  Dog?  But the answer was: to proove it wasn't chicken.  So what would a third follow up be?  I guess it would depend on what kind of animal the something-or-other was...Deer?  Hog?  Racoon?"

We walk a bit further and Daisy suddenly turns in two circles, squats, and I start pulling out the little blue plastic bags to collect what follows to make sure our pristine suburban  neighborhood is not fouled.  And while I am leaning over, my morning back aching, the train of thought suddenly clicks in again: 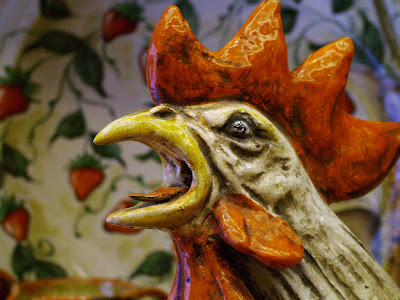 And then the train of thought stopped.

Thankfully.  This game could go on forever -- does anybody have the next one?
Posted by Bagman and Butler at 10:51 AM