I gave my wife an iPad for an early Christmas present.

"But she always gets priority on using it," I protest.

"But she really likes Solitaire, Hearts, and Spades," I continue protesting.

Anyhow, the motivations behind gift-giving are not the subject of this post! 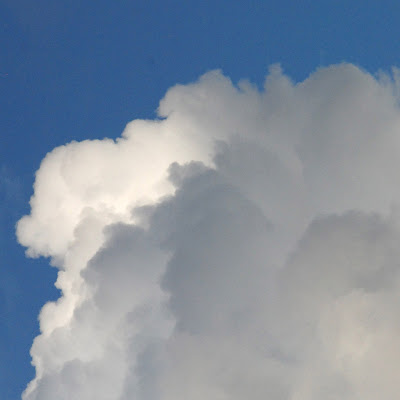 Cyberspace is embracing "The Cloud" as the future of data storage.  We might not even need harddrives anymore!  Backup your computer to the CLOUD!!
But what if it rains, I wonder.  Do I lose stuff?
I've already succumbed to the blind trustworthyness of Blogspot and Flicker which have already swallowed almost my entire photo collection to some place where my stuff will live forever -- available to anyone despite feeble copyright notices -- unless I get a Ph.D. in deleting things from the web.
The "cloud" does seem more benign than the "web".
Where does all the junk the human race posts every day actually go?   Sometimes I picture the Internet as an infinite landfill.
When I was a child, I accepted the stereotypical childlike vision of God and Heaven as a white bearded giant and angels living in the clouds.   What must they be thinking of all the stuff the human race uploads every moment?
Apple sent me an email yesterday with a reminder that I have not yet taken advantage of my free Cloud which came with the iPad.   But I'm still backing up to an external harddrive.
I wonder how long it will be before the Cloud police show up at my door.
Posted by Bagman and Butler at 1:22 AM