You can skip this one; it's not really a blog

Please feel free to ignore this blog.  I am posting it mainly because, at the end of each year, I print and bind the "Chronicles" because they document, in a weird way, my life and, years from now my children or grandchildren will have to make the difficult decision of whether to cart around all this paper (or keep track of the digital versions) or throw them away.

In any case, I got a Christmas letter from an old friend the other day and, in it, he enclosed a letter my grandmother wrote to his mother shortly after I graduated from college and took off on a pot-smoking, beer-drinking non-stop moving pary around the U.S., Canada, and Mexicao.  (Circa 1970).   It was hard to read because it brought home how much my grandparents, who raised me, loved me at a time when my young ego blew them off so easily.   They were proud of what I was doing and, of course, as an active alcoholic, what I told them I was doing was all lies.

So I'm just going to copy and paste her letter and my response to my friend who sent it to me -- it's probably not a blog that would interest anyone else.  But I need to get it out and move on.  Otherwise, I'll feel like crap all day. 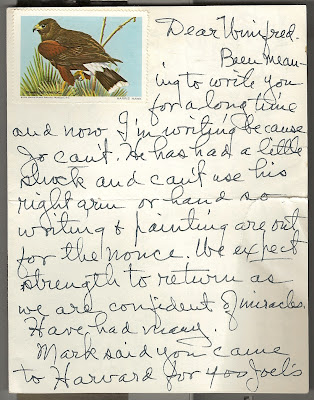 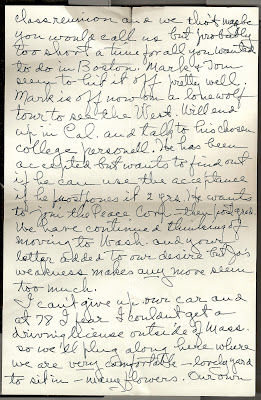 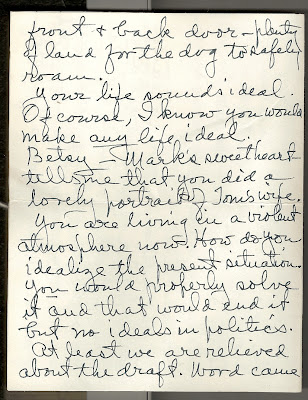 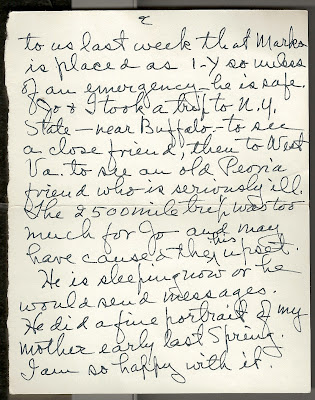 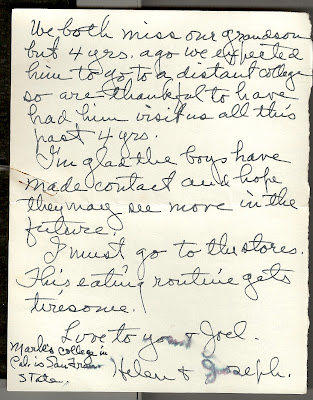 And the letter I wrote back to Tom...
Dear Tom,
It is not often that a Christmas Card punches you in the gut.  But your powerful piece about Svetlana's grandparents house coupled with the attached correspondence between my grandmother and your mother delivered a combination that managed to get through my usually too-effective defenses.
Did you realize that you and my grandmother both referenced "miracles."   It made the reading easier.  I have long ago given up trying to understand or define God or miracles (which is why I don't attend church where they pretend to have it all figured out) but reminders provide balm.
Please tell Svetlana that I felt her tears.  The last time I saw my grandparents house, where I grew up in Wrentham, it had been converted to apartments.  I think I would like to go back sometime, but then again, I think maybe not.   The past seems harder and harder to look at as we get older and it crumbles.
When I retired, a friend told me: "The windshield is larger than the rear view mirror for a reason."
Your description about visiting Svetlana's past caused me to have a dream last night in which I returned to Maple Farm and Lake Pearl.  Hardly anything was recognizable and the Lake itself had been filled with mud (my dreams seldom bother being obtuse anymore).
The letter from my grandmother to Winifred was hard to read because she was so sweet and I could sense her love for me in her words, missing me.  It made me face, again, the fact that I was lying to her and my grandfather.   She seemed proud that I was going off to request an extension from San Francisco State's MFA program in order to do my civic duty in the Peace Corps.   The fact is that my application to San Francisco State had been rejected -- how dare they turn down the next Hemingway!  My ego refused to let me admit my failure to anyone so I concocted the Peace Corps story.   My only connection to the Peace Corps was that I once stumbled, drunk, into their offices in Boston and picked up an application form and never filled it out.
And the "little shock" as my grandmother calls one of my grandfather's series of strokes was another step toward his death within that year.   The last thing my grandfather said to me when I was setting off on my "lone wolf tour to see the West" (my VW bus loaded with beer and pot) was, "I don't expect I will ever see you again."
A year later, after some of my most self-destructive drinking in L.A., he had his final stroke and I returned to see him in the hospital two days before he died.  He was comatose and I don't know if he knew I was there or not.  And I promptly seduced his nurse.  Another shovel of mud into Lake Pearl.
And maybe the miracle which I badly need to soothe my guilt is that I am now the grandfather myself.  Retired while Karen, Brian, and his wife Melody all work, I am called upon constantly to watch the three grandchildren -- Conner (3), Noah (1.5), and Kay (two months).  My self-centeredness still causes me to become irritated when they interfere with MY TIME.  But I also know on some level that the impact I have on them is probably more important than any of my so important creativity.
So thank you for your Christmas present to me.  It was powerful.
I'd write more but I already feel myself slipping into blah blah blah so I should close.
Love to you.
And Svetlana.
Mark
Posted by Bagman and Butler at 6:30 AM