Daisy's breathtaking rescue from the the terrible stick 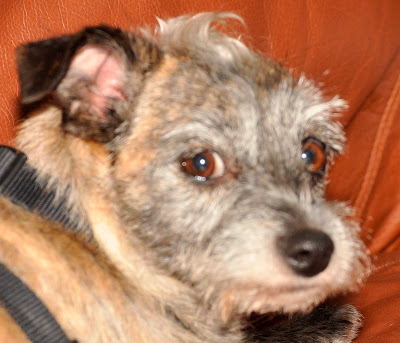 I got her leash, one of those spring operated expandable leashes which give her much more room to run.  Daisy is getting a little less exciteable, nervous, hyper, crazy every day she stays with us and it won't be long before we can let her run, trusting her to come when we call.

Once she sees that I have the leash, she is happy and enthusiastic and immediately runs to Karen.  She just comes to me if Karen is out but when Karen is in the house, Daisy does nothing without checking with Karen first.  Daisy and I are friends, but Daisy and Karen are bonded with super-glue.  Once Karen sent her back in my direction, we went out around the house where she did what she was suppose to do and then she caught distant sight of a squirrel in the neighbors yard.

Off she went, tearing in circles while I held on to the leash like a fisherman reeling in a rainbow trout, assuming the trout had hair and looked like an opposum.   As she splashed through leaves, however, her trailing leash caught the crook of a stick, which bounced off the ground into the air.  Catching sight of it, she bounced off the ground and into the air and tripled her speed.

And somehow, the stick -- instead of snapping -- got caught in her leash and went with her.

Looking backward at the bouncing wooden devil, she broke the sound barrier while I took off running to see if I could grab the stick and break it free.   I no longer run like I used to.  It is more of a fast bungle.
Nobody was looking where they were going.  Daisy was looking back at it and running away from it.  I was looking at it and trying to catch it.  But since we were all on the same line, nobody was making any progress and the bouncing, dancing stick seemed to be having all the fun.

Since we weren't looking where we were going, we just missed one tree and went completely through one small bush before the geometric realization came to me that I had to change the distance between me and the stick by shortening the leash and I pulled back.

Daisy, of course, interpreted this to mean that I was siding with the stick and was making her stop so it could catch her.   She let out a blood curdling yelp that I swear sounded like, "Kaaaarrren!"

But I tackled the stick which still refused to give up its ride until I broke it into sections and freed the leash.  Seeing that I was breaking the stick gave her a bit more confidence but as soon as we were inside, she immediately went to Karen and lay down at her feet, periodically shooting me evil looks.
Posted by Bagman and Butler at 9:35 AM