Friday Hometown Shootout -- LOOKING UP AND LOOKING DOWN

A DAY IN THE LIFE OF A BOBBLE-HEAD DOLL

This morning, my wife took advantage of it.

"I didn't get to the bank yesteday," she said. 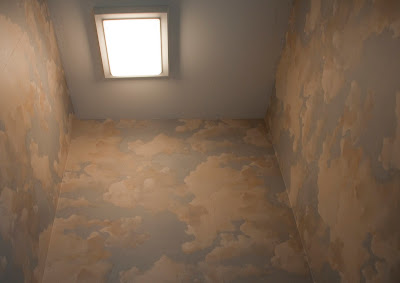 (hmm...that wallpaper is kind of interesting...)

Do you have any cash in your wallet that I could borrow?" 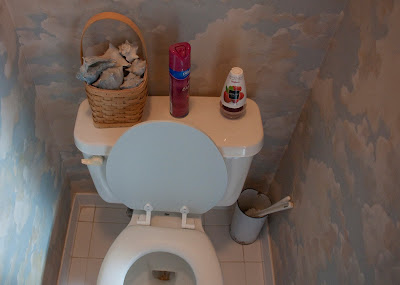 (Kind of goes with the shell motif...)

"Thanks for agreeing.  I'll leave you a couple of ones."

So as Karen gets ready to go out with all my money, I wonder how to spend my morning before going to work and look out the back door and am further discouraged by the sticky balls all over the grass. 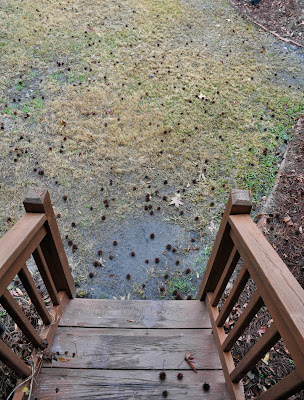 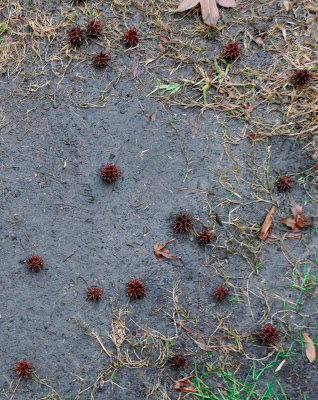 I hate these balls that fall off the sticky-ball tree (I'm sure the tree has an actual name but I hate it too much to research it).  If I am forgetful enough to walk out barefoot, I pay the price.  If I wear shoes, I stomp them into the ground where they are harder to rake up.  But it rained last night so I hope that finally they have all come down and maybe this is the end of them -- I've already raked up three bags full over the last week!  I look up hoping to see that the end is near. 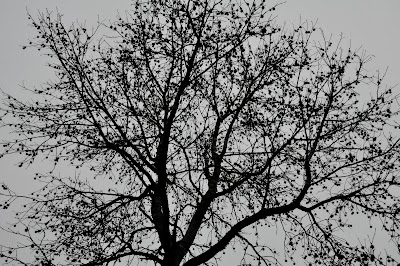 Only ten million to go!  Drat!

"I was going to help you rake the balls but you seem so agreeable and happy about it, I'll just go on to work," she says.

"Are you nodding because you're okay with raking by yourself or are you looking for another picture to take?"  Karen asks.

But, at least it is a nice day.  The dawn is pretty when I look up. 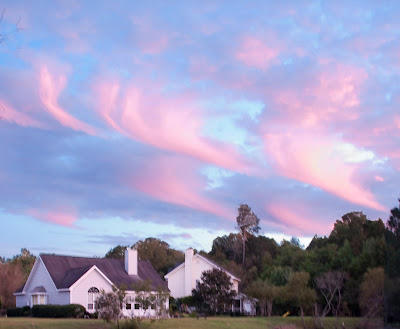 And pretty when I look down.

I'm glad Karen has left because she's already a little bothered about why I take so many pictures of the neighbors' house across the pond.  I don't even know the family.  But their house is where the reflections are.  She thinks they must suspect that I am spying on them.

But soon, I head off for work across the Ravenel Bridge, a recent Charleston landmark.  Of course, bobble-heading, I look down. 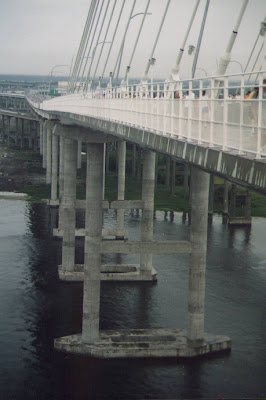 Then I look up Then I look further up 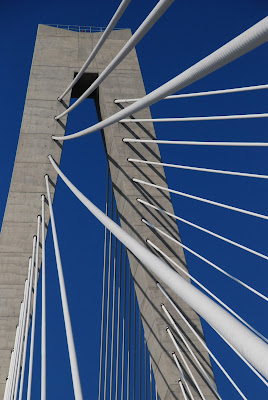 Then I look really uppity up... 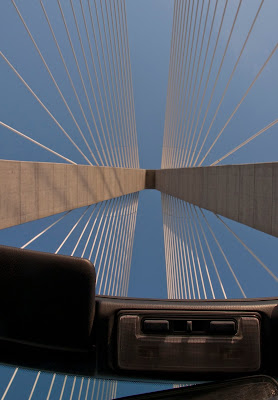 And almost sideswipe a man in a Blue Altima

LOOK WHERE YOU'RE GOING!"

Somewhat shook, I decide that I should watch the road, stop shooting, and just think about some archive shots.  I was trying this week to avoid archive shots and shoot more, but while I'm driving it is safer to use the archive...and the shape of the bridge reminds me of 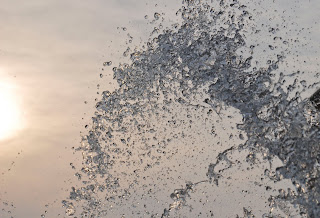 which reminds me of looking up at the St. Louis Arch in 1985 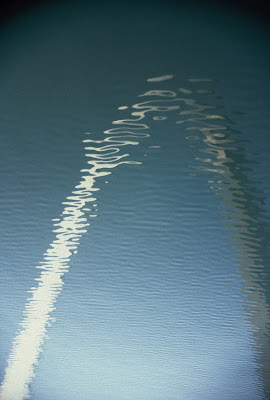 Except I guess I was looking down...so confusing.... 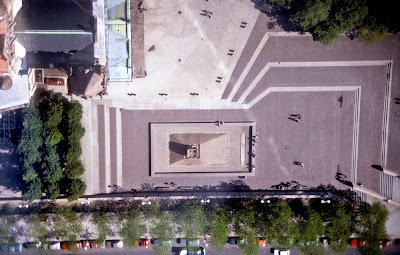 But enough of archives.  I've arrived at work.  I look up and see my window with my cactus. 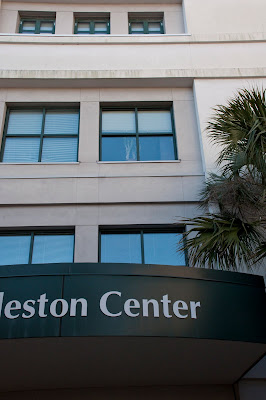 I look up and wave at it. 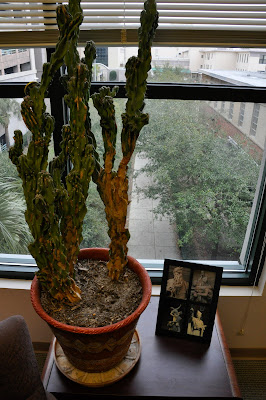 It looks down and waves back

I eschew the elevator and take the stairs feeling proud of myself because for the first time in my life I've actually used the word "eschew" in a sentence.   Twice, in fact..in the same sentence. 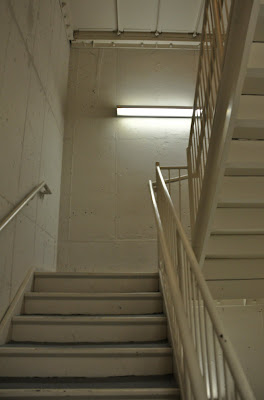 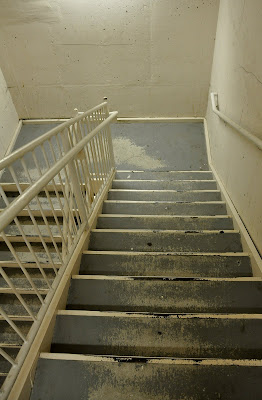 ...go down the stairs.  Very short work day.  Wish I was at the beach.

Driving home, I avoid accidents again and think about the beach and succomb to more archives from last summer. 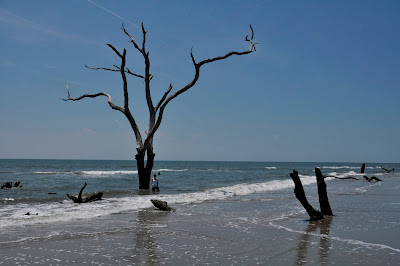 When my daughter visited (you have to look close)

OMG!   The sound rips me from my revery and despite my decision to keep my eyes on the road, I can't help looking up.   One of the C-130's from our airbase is heading for Haiti.  Or Afganistan  Or Irag   Or maybe they are just training.  Or going for pizza.   I don't know...only that it is LOUD!!!  I stare up at it, put my fingers in my ears, and 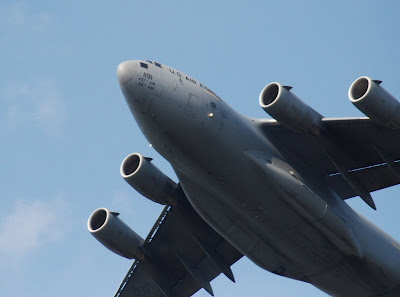 In my rear view mirror, I see a blue Altima skidding into the grass median.  A man is waving his fist but I can't hear him too well with the plane flying over.  He must have been yelling at somebody else.

But this second close encounter causes me to slow way down while driving home.

Not really.   But I need to say that in order to assist the reader with what I learned in one of my college creative writing courses.  I think it was called the "suspension of disbelief."   According to the professor, this was what the writer had to create in the reader.  So when something unbelieveable happens in a book, the reader will believe it anyway.  I could never understand why they just didn't call it the "establishment of belief" instead of making up some fancy double negative term for it, but I did get it right on the final exam and, remarkably, still remember it.  So by telling you that I drove very very slowly, I am hoping to get you to suspend your disbelief when I tell you that it was already dark when I got home.

BUTLER:  "What thinking person would ever believe that?  All you did at work was walk upstairs and downstairs.  By the time the plane flew over, it couldn't have been more than 10:00 a.m.!   To make it dark by the time you get home, you would have had to drive 5 miles per hour on the Interstate!"

BAGMAN: "Suspend your freaking disbelief!  If he says it was dark when he got home, it was dark!"

Anyhow, having driven slowly -- and stopped for gas (does that help?) -- it was dark by the time I finally got home.   And I was able to play with a great application on my new fancy Droid phone.   It's called Google Sky. 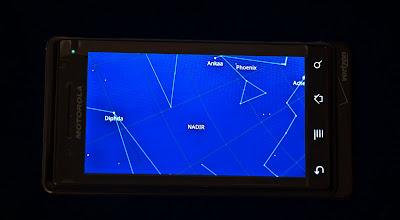 This is an amazing little gadget that uses GPS to figure out where I am.  It knows the time and date so it can orient itself .  When I point it at the sky, it will display and name whatever constellations or planets I'm looking at.   Of course, normally, when I am looking at this screen, I am looking up.  But I had to use a time exposure to shoot it so I had to use a tripod and put it on the ground.

So it is looking down.  And WOW!  It even knows it is looking down and tells me it is pointing to the Nadir.   Brilliant little Droid.  It tells me that I would be enjoying the sight of  the constellations Ankaa and Diphda except the entire planet Earth is blocking my view.   I've never seen Ankaa or Diphda but those of you in the Southern Hemisphere might know them.

I'm used to Orion and Gemini, so I take Droidman, the amazing brain extender, and look up to find them. 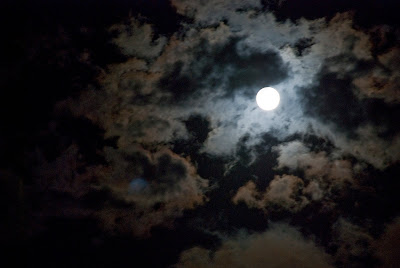 Darn.  Too cloudy to look at stars tonight.

BUTLER: "Excuse me, Mark, but where did the clouds come from?  There were hardly any clouds when the plane flew over."

BAGMAN: "Can't you suspend anything?!!  Weather changes!  He drove slow!  He stopped for gas!"

So, as Bagman and Butler argue, I am walking around in the dark, looking for a break in the clouds so I can use the Droid to find the Pliades.   Looking up, I step on some sticky balls, lose my balance, and stagger flailingly into the street.