Our grandson, Conner, who turned one last month, has transformed Karen into a Yard Sale Dervish.

I could pretend to complain about being dragged out at 6 a.m. on Saturday morning, but I came home with three beautiful frames for a dollar apiece so I need to be silent.  But this blog isn't about yard sales.  It's about sound. 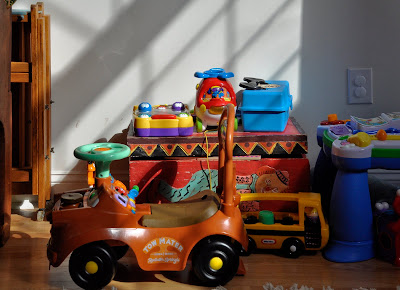 With one exception, all of the toys in this picture contain little chips and batteries and they sing and talk and make noises.   The exception is the old wooden chest.  But it is full of even more hollow pieces of bright plastic that contain minature sound boards.

I remember when Brian was a bit older than Conner and we were doing Santa Claus at one 'o'clock in the morning and I was trying to assemble a Big Wheel tricycle and wondering if the instructions would make more sense in the Spanish version.  I came to Step 123.f.3 which read: "Using screw C attach motor sound clapper H1 to Wheel K12."   Just before I began to attach it, I thought to myself, "You idiot!  You don't actually have to do EVERYTHING the instructions say.   It could be a quieter tricycle.

Today the sounds are built in.  In fact there are two of Conner's toys that are touch activated.  These are the ones I always brush against when I get up to retreive the TV remote which Conner has put under the couch.

Last week, I was telling Brian about my Christmas Eve sabotage of his Big Wheel.  He laughed and said he really understood.  Then he said, "But, you know, my friends had these things and I always just thought mine was broken."

Santa Claus appropriately apologized, and walking into the kitchen for a soda, brushed against the magic shopping cart thingamabob (not pictured above) which responded by saying, "Let's sing a song!!"

Posted by Bagman and Butler at 8:11 AM