Friday shootout addendum - how could I forget Alice?

When we were living in Roanoke, Virginia, sometime in the early 90's, we put up a bird feeder on the ledge right outside the kitchen window.   The house was on a hill and had an odd design so the kitchen window was about the level of a normal second story window so that squirrels could not get to the birdfood.

Just a feeder.  And most birds were leery of it because it was right next to a window behind which we large pale mammals kept looking out.   But some came.

Then one morning, walking into the kitchen we were met with an amazing sight.  A morning dove had not only come to the feeder...but had comandeered it for a nest!  We name her Alice.   After the first few times of terrified flight when we sat down at the table separated from her by a pane of glass and less than 24 inches, she settled down and hardly gave us a glance.  We tried to fill the feeder only when she was away. 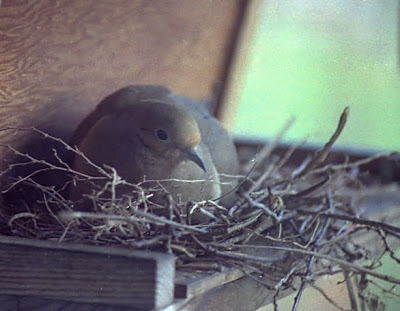 Alice was a great companion and soon our hopes were answered and two small eggs appeared in her nest.   We watched.

There was one extraordinary and violent event.  I was in an adjoining room when I heard feathers flapping furiously against the window.  I ran in and saw a large gray squirrel that had somehow managed to drop from the roof onto the ledge in hope of an egg dinner.  Alice was standing her ground, pecking, flapping, squaking and the squirrel was snapping and scratching her.   I ran over and threw open the window and discovered that I was not as terrifying as I thought.  Both animals noted me but continued battle with each other.   I reached out and, without thinking, swatted the squirrel, sending him spiralling down to the ground below but doing him no damage, he scampered off.   Alice didn't actually thank me.  In fact, she shot a peck in the direction of my hand.  That's alright.  She was a mother bird in protective mode.  I shut the window.

To make a long story a little shorter, we watched...and we watched.  One of the eggs hatched.  The other did not, probably damaged during the battle.

Then we started an even more intense watch since we really wanted to see the first attempts at flight.  Unfortunately it was during a period when I was not photographing a lot.  So I only have the one picture above.  But I was really looking forward to watching the process of learning to fly.

Then came a Saturday morning when we saw Alice was in a nearby tree and her chick was calling to her, flapping its wings, and getting nearer and nearer to the edge of the nest.  We waited.  She waited.  The chick flapped and chirped.  We waited some more.

Suddenly it looked as if the chick had tripped and fallen out, but within a couple of falling feet, its wings caught air and it zoomed toward the tree.

We stood waiting for it to come back and try again so it would get better at it.  But neither of them never returned.  It had never crossed my mind that unlike teaching a boy to ride a bicycle, this was a one shot deal.  The nest was only for the eggs.  Once flight was achieved the world opened up.  They were gone.  It happened so fast.
Posted by Bagman and Butler at 5:11 PM