Bagman, Butler and I go to Columbia


, capital of the great state of , is a scenic two hour drive from . From the windshield, the beautiful blue Southern sky stretches out above a long line of long needle pine trees, standing delicately together on either side of a smooth gray highway. It is quite beautiful. For five minutes. Unfortunately it does not change at all for two hours. 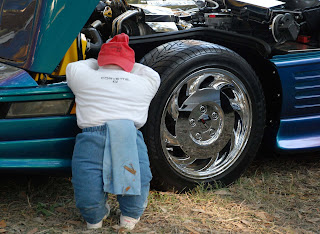 I make this trip at least once a month. Two hours out and two hours back. I have done the math and estimated that I have been able to enjoy this view for approximately 645 hours since moving here. I never should have done the math. It makes me reassess my sanity.

BAGMAN: “You have too much sanity to begin with!”

: “I think it would be more precise to look at your old calendars and get a more exact number.”

I probably should leave the B&B brothers home when I go to play bureaucrat but they insist on going everywhere but they usually promise to stay quiet. But I often hear them arguing or giggling in whispers while I sit for three and a half hours with all the other Directors of County Addiction Treatment Programs and assorted State Officials. We meet to solve statewide problems like how to get alcoholics out of emergency rooms and into our detox facilities. And where to go for lunch.

Why? Because we are bureaucrats. This does not make us bad people. None of us got into these careers because we wanted to waste time or taxpayer money. All of us have a sincere desire to help people in trouble and to serve our fellow human beings. I’m not being funny. It really is true. Of course, the other reason we do this is because we like to hear ourselves talk.

BAGMAN: “And you’re doing way too much of it right now!”

Okay. I know. Get to the point. So I’m sitting in this room with a bunch of people in suits and we’re talking about Obama’s stimulus package and Medicaid. I was paying close attention at first, but I began to drift after the third person spoke, saying basically the same thing that the first two people said.

There’s a reason our meetings last so long. Everything may have been said in the first half hour, but not everybody has had a chance to say it.

Plus we have to talk in bureaucratise. I’ve become pretty good at speaking bureaucratise, which helps because, as I drift further into thinking about what a great picture it would make if everybody would get up and throw their pants, suddenly the chair says, “How would this effect Charleston?”

The fact that I haven’t a clue what “this” refers to, doesn’t slow me down. I simply say, “I don’t think we’re out of the woods yet but if we can capture the information and crunch the numbers a state-of-the-art solution can be implemented. If we work as a team and stay results-oriented this might be the wave of the future. Of course, that’s not written in stone.”

My peers nod approvingly at me and a couple of them give me the thumbs up. Well-earned appreciation for my ability to use 8 stock phrases in a short paragraph. Bagman has fallen asleep long ago although gives polite little applause, the kind of fingers against the palm of the hand clapping that the Republican side of the Senate did during Obama’s speech last night.

Finally, the discussion turns to where we are going to go for lunch.

Later, guilty and bloated for having eaten too much, I get to enjoy my 646th and 647th hours looking at pine trees and trying to figure out if they look any different viewed from the other side driving home.

Posted by Bagman and Butler at 6:56 PM