Blast from Past – Lockwood meets Vonnegut (Part 1 of 3)


This morning, I used my get up earlier than everybody else so that I can have time for myself time to work on the “Endless Project.”

Lifetimes ago, I read a book, I think by John Barth, who I pretended to like because he was popular at the time and I was trying to be literarily correct. I didn’t really like John Barth, didn’t think he made a lot of sense, and don’t remember the title of the book. In fact, it may not even have been John Barth at all.

But somewhere, in some book I once read, there was a character who had two obsessive rituals that illustrated his core belief about life. First, he paid his rent every morning. Just one day’s rent. Because he could never be sure if that was the day that death would come to him. Secondly, he ended every day in the evening by working for an hour on a project that he had calculated would take a thousand years. Because you never could be sure that you wouldn’t live forever either…or at least a long time. Maybe it was John Barth after all since the second half of this formula doesn’t make a lot of sense to me now.

It may not make a lot of sense but I have a project that is sort of like that.

Shortly before last Christmas, I purchased a really good printer/copier/scanner that is also capable of scanning negatives. This is exciting because it enables me to convert lots of old film photos to digital. Scanning negatives is better than copying prints because it captures more detail. Of course, to get the detail, you have to change the default setting of 200 ppi to 600 ppi and this causes each scan to take ten minutes or so! I need a faster computer with more RAM and more ROM and more OOMPH. I can also set it for as high as 2,800 ppi but anything above 600 currently crashes my system.

More detail is great! It reveals more clearly all the dust specks, scratches, hairs and accumulated junk on these old negatives despite all my efforts at blowing, brushing, anti-static-ing, and cleaning. Most of my negatives, I placed in protective sleeves. But, but over time, hairs and dust are more persistent than gravity. I’ll never beat Mother Nature. 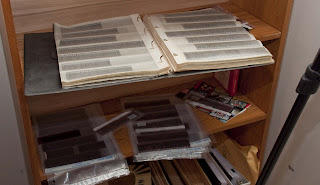 These negatives go back to 1968 when I used to do my own black and white developing and printing in a bathroom sealed off by towels and blankets. From 1968 to 1976, the cheap apartments I lived in always reeked of pipe smoke and booze except for the bathrooms which reeked of developer, fixer and stop bath. It’s a wonder I can smell anything today.

Damn. Digressing again. I am incapable of telling a story straight. Where was I?

Oh, yes. The endless project. The notebook pictured above, which contains the subtle odors of pipesmoke, booze, photographic chemicals, and mould from countless storage sheds, also contains approximately 8,500 images. 8,300 of these are junk…booze focused fuzz balls of god knows what or guilt-producing pictures of old girlfriends. But in order to find ones I want to save, I have to at least do the intial pre-scan. I may never get through them all.

Oh yes, there is also a huge box of snapshots and color negatives from the thirty years after that! Many of these negatives are not in sleeves much to the delight of hair and dust particles that treat the box like an all you can eat buffet.

But periodically I plow on through memory lane. And this morning, I suddenly ran into John Lockwood.

Posted by Bagman and Butler at 7:14 AM