Blast from Past – Lockwood meets Vonnegut (Part 3 of 3)


I hate this blog!

(Although I’ve been surprised at how many people seem to like it and are looking forward to how it comes together at the end.) Maybe that’s why I hate it – because I realized yesterday that it ends kind of pointlessly. Don’t look ahead! Trust me, in this case the trip really is better than the destination.

Most good stories have a couple of threads which carry their own weight but then gradually intertwine to a dénouement in which they all come together to a make a whole that is greater than the sum of its parts. Or a kind of O’Henry twist. (Or is that a candy bar?)

Okay – so John Lockwood, before he went down the in a kayak, read an anthropology book about some very primitive hunter-gatherer tribes that had recently been discovered. He decided they were the most interesting people in the world. More interesting than Einstein or the Rolling Stones. They had no need for possessions – or clothes -- and greeted each other by fondling genitals instead of shaking hands. Enough said. I hear Bagman starting to wake up in the other room.

Moving along, there was Kurt Vonnegut. Kurt Vonnegut had become my favorite writer of all time that summer. Mostly because his sense of the absurd was similar to mine and partly because he wrote very short chapters. I would have said he blogged but that word had not been invented then. In fact, we still wrote on typewriters. Absurd is good. Short is good. I still thought I wanted to be Ernest Hemingway but that is too much of a digression even for me to get into here. Vonnegut also had a dark, scathing, bitter humor at times which seemed stylish to me. 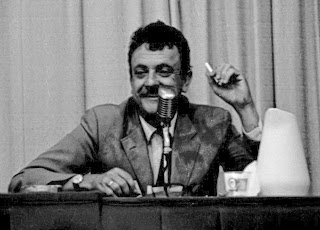 Continuing to try and move along, Kurt Vonnegut came to speak at the Annual Boston Book Fair. It wasn’t a long trip for him because he lived on . I had even stalked him once and took a picture of his mailbox which I will post someday if I ever find it in the 8,500 images I am going through at a snails pace.

John and I went and sitting in the audience listening to him talk, John became convinced, for some unknown reason, that Vonnegut had read the same book about the hunter-gatherer tribe. “I’m going to go up and ask him,” John insisted. “Whaa-Ow.” The embryo of Bagman was cheering and the embryo of was cringing. I was trying to change film canisters because digital had not been invented yet.

Vonnegut’s speech ends. He answers a few questions about the future of American Literature and what did he think of the Vietnam War. He leaves the podium and heads down the aisle so he can go back to Cape Cod when John charges out of the crowd babbling like Bagman (although Bagman hadn’t been invented yet either) about hunter gatherers and shouting “Whaa-Ow!”

And here is the picture. I’m not sure whether Vonnegut is pulling away because of John’s loud “Whaa-Ow” or he was just afraid he was about to get his genitals fondled. 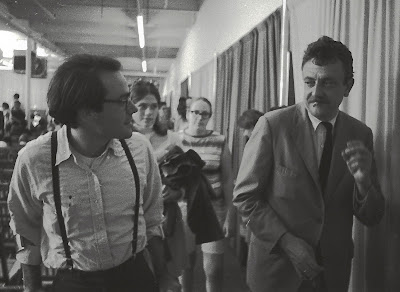 So, in desperation to salvage some entertainment value, I’ll close with a few choice Vonnegut quotations:

1. Any reviewer who expresses rage and loathing for a novel is preposterous. He or she is like a person who has put on full armor and attacked a hot fudge sundae.

2. I tell you, we are here on Earth to fart around, and don't let anybody tell you different.

3. True terror is to wake up one morning and discover that your high school class is running the country.

4. Life happens too fast for you ever to think about it. If you could just persuade people of this, but they insist on amassing information.

5. One of the few good things about modern times: If you die horribly on television, you will not have died in vain. You will have entertained us.

6. Here is a lesson in creative writing. First rule: Do not use semicolons. All they do is show you've been to college.

7. Just because some of us can read and write and do a little math, that doesn't mean we deserve to conquer the Universe.

8. I say in speeches that a plausible mission of artists is to make people appreciate being alive at least a little bit. I am then asked if I know of any artists who pulled that off. I reply, 'The Beatles did'.

And kick me if I start another multi-part blog without knowing how the last blog will end.

Posted by Bagman and Butler at 9:55 PM