Blast from Past – Lockwood meets Vonnegut (Part 2 of 3)

I learn new things about blogging every day. For instance, I thought it was such a good idea to break longer stories into parts and label them “Part 1 or 3” or “Part 2 of 730.” I first saw it in a blog called “Explorers View of Life” and thought, “Aha!”

What I learned this morning is that, before you write “Part 1 of 3” you should be sure that you are going to want to write parts 2 and 3. Better still, you should have already written them. Which reminds me of yet another blog about why I have difficulty finishing something I start.

: “Just concentrate, Mark. Get back on task here.”

BAGMAN: “Finish the bleeding story so we can go have some fun!”

Okay – so, I’m living in a cheap apartment across the hall from Peter Lockwood who has gone away on a trip for a month and I hear someone banging on his door and I open my door to tell the person that Peter is gone for a month…(come to think of it, good thing it wasn’t a potential burglar! Duh)…but it was John Lockwood, his brother, back from the army and from hitchhiking, hiking, and exploring everywhere.

BAGMAN: “Step on it! The story is lagging! Just say anything, make it up! Nobody will know!”

Okey, okay…dispense with form, style, grammar…say it quick. Be done with it. It’s a kind of dull story and nothing is going to make it much better. Okay, okay. So John moves in with me until his brother comes back except after is brother comes back he’d rather stay with me anyway and we become fast friends. 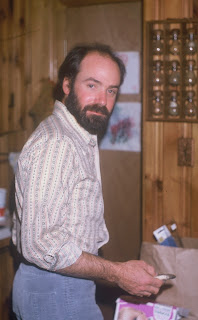 John is a wild man. He enters a room and the walls bend outward with his trademark “Whaa-Ow” (said in the same cadence and accent as the military “Hoo-Rah”, except that it is “Whaa-Ow” not “Hoo-Rah”…potato potaato, let’s call the whole thing off!...Damn! Digressed into confusion again. John is curious, explores everything. He is at a party at someone’s apartment in another building that is still being built and, being curious, he opens a door in a hallway, steps through and falls two stories down. Smashes his hip. Doctors say he’ll never walk again without crutches. He takes up kayaking. “Whaa-Ow.”

: “I don’t know. This rushing through a really tragic story like bullet points in a power point doesn’t seem right somehow.”

BAGMAN: “I don’t know if I’m laughing or crying.”

Well, it was really tragic and emotional at the time, but I’ve already dragged Part 2 on too long…See I never should have started this. Where was I – kayaking…yes “Whaa-Ow”, John refuses to give up exploring for knitting so he learns to Kayak and then works with some kayak builder to create a kayak that can be broken down into two parts which can be strapped on his back because he needs to leave his hands free for the crutches. And he heads off to Kayak the length of the through . Every time he has to portage around bad sections, he has to make three trips…one with the front of the kayak, two with the back of the kayak, and three with his supplies. “Whaa-Ow.”

He made it to the West Coast. He lived in a stationary railroad car for awhile. I never saw him again although we’ve exchanged an email or two. He developed a really well-respected make your own wooden kayak company our there. I still get his catalogues. Slick, beautiful, wooden boats. And they always have pictures of him and his family in beautiful wilderness spots.

But I’ve reached the end before part 3. Dang!!! Another good reason for planning. I skipped the Vonnegut piece entirely. As well as the hunter-gatherers!

: “Breathe. Breathe. Just get through tomorrow. You’ll get the hang of this series format soon.”

Posted by Bagman and Butler at 7:19 AM