Barclay Back from Kenya


I'm a little pressed for time this morning...heck, this week, actually.

BAGMAN: There you go whining again -- before you even start!

And you're one of the reasons, I get pressed for time...jumping in and changing the subject before I get started.

BAGMAN: You hadn't even started a subject yet...just whining about being pressed for time.

Because you keep interrupting!

Where's Butler when I need him?!

Okay, concentrate! I don't have lots of time because today is the second day of Hurricane Season in Charleston. So we are having our first big disaster drill and I have to go to the Emergency Operations Center and take on a different role. And I have to be there early and Karen is about to wake up and ... 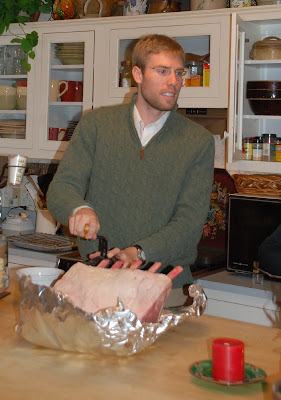 Barclay cutting a Christmas lamb two years ago
Yes...yes...Barclay. Barclay is the oldest son of my wife's best friend since kindergarten. And I'm sure I'll have lots more to tell you about him because he will be living with us for the months of July and August, while he fits in one semester of study in one school before going off to another. And maybe I should start from the beginning...

Barclay stopped by my office at work yesterday afternoon. He couldn't call first because he doesn't have a cellphone because he just got back from Kenya after a year of studying AIDS and malaria and treating folks in tiny village clinics that often don't have running water or walls or...

BAGMAN: You call that the beginning?!!!

Barclay is, frankly, one of my heroes. When I first met him, he was just a little boy, and sometime I'll find some old pictures...

BAGMAN: At least that is closer to the beginning!

Okay, perhaps I should just give a synopsis since the hurricane drill is looming and the clock is ticking and I had trouble waking up this morning and ...

BAGMAN: You're back to whining again, you know.

I know! I know! Synopsis, then. Barclay is a fourth year medical student at the Medical University of South Carolina, MUSC. His specialty is emergency room trauma surgery. But he is not going to be your average doctor. Instead of rushing through medical school as fast as he can on his way to a BMW and the golf course, he keeps running off to third world countries. He now speaks Swahili in addition to Doctor talk. He also made a decision in Kenya and in the Sudan that if he is really going to be effective, he needs a masters in public health, and got accepted at London University where he will go in the Fall for a year or so before coming back to finally finish up his fourth year at medical school. 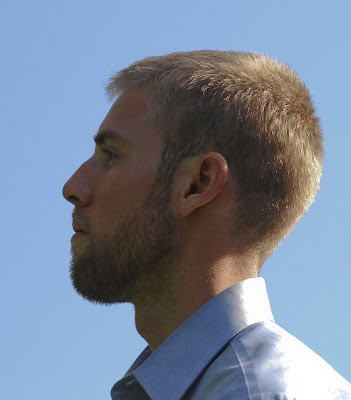 A posed shot I took of Barclay before he left for Africa
so I could make a Christmas present for his mother
He is also the nicest most humble guy I've ever known. And he would not say this, but my assessment is that he has decided that instead of saving the world one person at a time, he will work on saving the world one country at a time.

He says that he just has an insatiable curiousity for learning new thing, particularly learning them by immersing himself completely in a different culture.

He lives large. When he came by my office so I could give him a house key, he had just returned from a side trip to St. Louis where he presented a paper on HIV and malaria in Africa to an auditorium full of physicians.

I've got to wrap this up...damn the clock...I also can't wait to see his photographs although he did say, sadly, that after the first 7 months in Kenya, his Nikon finally got too dusty and humidified to work any more.

He'll be with us for July and August so more stories are coming, I hope.

A rough proof of the final portrait Karen and I
gave his mother last Christmas.

Posted by Bagman and Butler at 5:17 AM