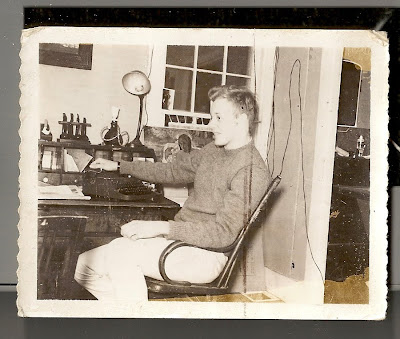 My last blog about keeping 500 feet back from fire trucks elicited a comment from Patty, one of my heroes, who talked about being a fire truck chaser. Her comment brought back one of those memories that make you cringe.

I was probably around 17 which meant I had an ego that was even bigger than the one I have now. This is probably because had not even been a gleam in the eye of my conscience yet and it was just Bagman and Me.

BAGMAN: “And we were much better off then.”

Now, now, boys. Let me tell the story. I think I even have a picture of me. I look innocent enough but in that boyish head I was convinced that I was destined to write the Great American Novel. And…oh, yes…this was supposed to be the fire truck story.

So, I got my first writing gig when Howard Topham, a regional reporter for the Woonsocket Call, hired me to be the Wrentham () Correspondent at 2 cents a word. I wrote the best coverage the local Garden Club ever had. And I showed up if I got wind of accidents or fires, which wasn’t often at first. 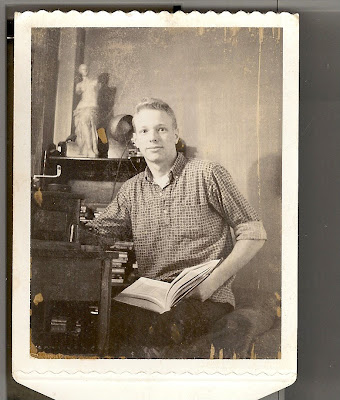 Check out the typewriter!

But it was a small town and the volunteer fire chief and some of the small town cops got to like me and asked if I might take pictures for them from time to time. Skid marks and such that they could use in court. Wow! I was a big cheese then!

Even better, eventually, the fire chief even gave me a permit to put red flashing lights on my blue 1965 Corvair. Of course, it got me pulled over one time near Boston when I was commuting to Northeastern University and a city cop who was always in the same intersection didn’t think too kindly of a hippie kid (two hippie kids because my buddy, Lee Armen rode with me) having red 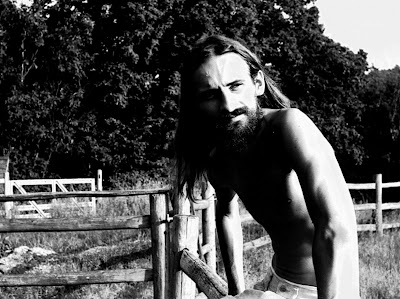 lights. But I had a permit and he couldn’t do anything. But he told us we had to “cover them up when we were not in our jurisdiction.” The next time we rode through his intersection, I covered them up with a pair of argyle socks. He didn’t think it was funny but just scowled at us.

Anyhow, now that I was a REAL OFFICAL REPORTER/PHOTOGRAPHER with red lights, decoder ring and everything, I thought that my coverage of fires absolutely needed to include photographs of fire. It pissed me off that we always had stupid little fires and the fire department always put them out before I got there. All I got were stupid little pictures of firemen standing around telling dirty jokes to each other.

Oh yes, and for Patty’s benefit, I should mention that my REAL OFFICIAL PHOTOGRAPHIC EQUIPMENT consisted of an old Polaroid Land Camera – the kind with the bellows. But I was hot stuff.

Now the volunteer fire department had one tanker truck, no hook and ladder (this was a rural town), a red pick up-truck, and the “bread wagon.” The bread wagon was supposed to be the rescue truck. It was actually an old bread truck that they had painted red, removed the bread, and put in some coils of rope and a first aid kit. But even with it’s siren screaming and its lights flashing, it still drove like…well…like a bread truck. Top speed: 35 mph.

So one day, I heard the scanner go off…

Okay, so one day – since I didn’t have a scanner – I heard the distant whistle from town ½ mile a way and called in to find the location of the fire and it was in my direction. I thought I might get there first if I could get out of my driveway before the trucks passed.

I lept into the blue Covair, turned on the lights, but alas, the tanker was already passing, followed by the red pickup truck and then…heart sinking…the bread wagon. I pulled behind the bread wagon, cursing as the tanker and pick-up got further and further into the lead. Behind us cars were beginning to back up in a line. Frustration built up.

So finally, I waited until there was a short straight stretch and gunned the Covair, leaned on my horn, and passed the bread truck almost sideswiping an on-coming car. Driving like a maniac, I managed to catch up to the fire trucks and pulled in right behind them at the scene of the fire.

Which the owner of the house had already put out with a garden hose.

Eventually the bread wagon arrived and the driver got out and talked to the chief who headed in my direction, his face redder than the fire I had hoped to photograph. In black and white, of course, with a Polaroid with a dirty lens.

I almost lost my lights that day. Boy did he ream me a new one. I discovered that even if I had the secret decoder ring I was still a “stupid, teenage punk” and was never ever ever going pass a fire truck on its way to a fire.

I still cringe thinking about it. Eventually I did get to see better fires. In fact, one almost killed me in a forest, but that’s another story of stupidity.

Thanks, Patty for reminding me of that one.

Posted by Bagman and Butler at 6:12 PM