Incongruity and Despair in Venice 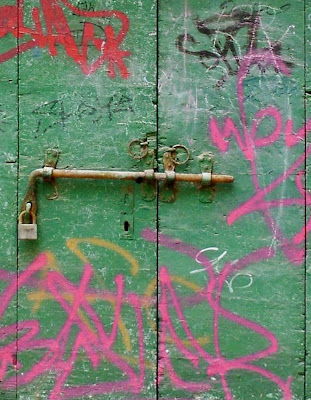 Okay, okay – Instead of taking pictures, I’ve been whining all week about having nothing incongruous to post today. So I’ve decided to make my entire shootout incongruous by posting a bunch of “un-incongruous” pictures I took in Italy in 2006. I can’t think of a good reason for this except that I’m lazy and I just wanted to.

In the summer of 2006, Karen and I spent 3 weeks in Italy (Rome, Florence, Tuscany, and finally Venice). We had planned the trip when I first discovered that I had prostate cancer because I needed something positive to work for. My actual goal was to have surgery, overcome initial incontinence, and urinate in a controlled fashion in a public restroom in Rome.

I have to say that Venice is my favorite of any city I’ve seen, except for the hoards of tourists. Primarily because it is so different (or “incongruous” to use a word that I will never again utter after this post). But the first day we arrived, the differences almost did us in! Have patience with the story (or ignore it and just look at the pictures) – the pictures don’t really have any relevance to the first day anyhow. But y’all know me, that I can’t help but run off at the mouth.

BUTLER: “Yes we know. And if Bagman was back from his Dorothea tryst, he’d be leaving again.”

So, our train from Firenzie was late and it was already getting dark when we pulled into the Venezia station . (I drove Karen crazy on that trip by trying to be cool and referring to the cities by their Italian names). It was 6:00 p.m. and we got off the train in a panic because our reservation said we had to be at the bed and breakfast by 5:00 because the proprietress went home after that. 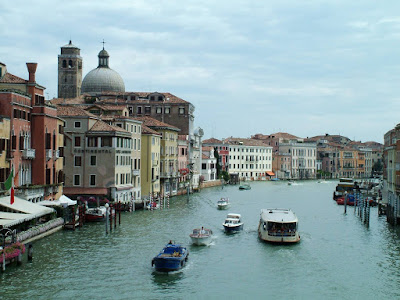 We walked out of the train station into the most beautiful, romantic purgatory on Earth. It was another world. It was also the hottest day or Italy’s record-breaking 2006 heat wave. It was also raining. 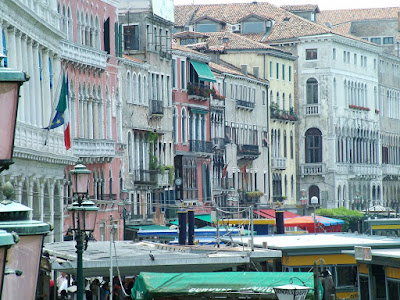 We were also lost with only an address on a print out from the Internet.

We were also carrying five tons of luggage despite the good advice from all our friends to travel light. Each of us had one huge rolling suitcase and a second medium sized suitcase lashed to it. I had a laptop bag and a camera bag and since we had been in Italy for two weeks by that time we had 37 plastic shopping bags of treasures, none of which I can now remember.

With determination and blind faith, we wrestled out bags across the plaza to a sign that said “Taxi” which is Italian for “Taxi.” It was a boat. Duh. I mean, I knew that Venice was a city of canals but I always thought it had roads as well. Nope. Just a huge incongruous maze of canals, bridges, and alleys. 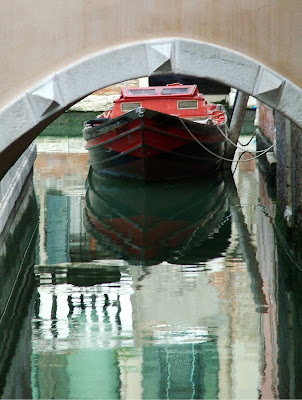 I show the boatman my printout from the Internet showing the address. He looks, shakes his head, and rattles off a batch of Italian that I pretend to understand but only get enough to figure I'm supposed to cross the bridge and find a telephone and call the hotel. 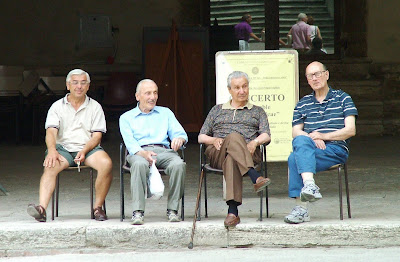 The bridges in Venice are truly incongruous. They are more like steep vertical stair-hurdles. And rolling suitcases don’t roll on stairs. 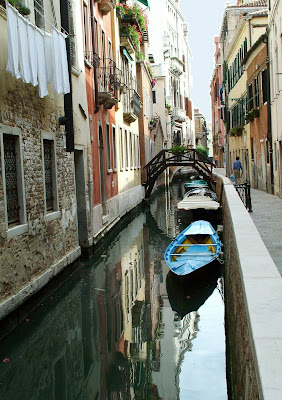 By the time we get across the first bridge, I am drenched from the inside with sweat and from the outside with rain. I go to the public pay telephone with the hopefulness of someone climbing the gallows. I fail miserably, as I knew I would, to figure out how to use it. Finally I am stuffing Euros without counting into the thing and punching random buttons with more and more force, slamming the receiver down and uttering words I hope Italians don’t understand. 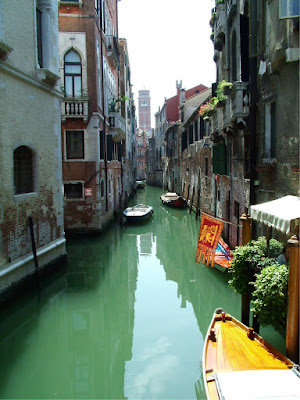 I’m also watching Karen, who is stopping everyone walking by and asking everyone directions in ever louder English which we Americans use on the theory that louder somehow means easier to understand.

Eventually we learn the biggest incongruity of all in Venice. Street addresses don’t follow any order. 2006A Casa del Molena does NOT mean a specific place on the even side of a road between 2004 and 2008. 2006A is simply a number randomly assigned in a district called Santa Croche. I look at a nearby door and see number 769. It doesn’t help at all and I get a strong desire to weep. 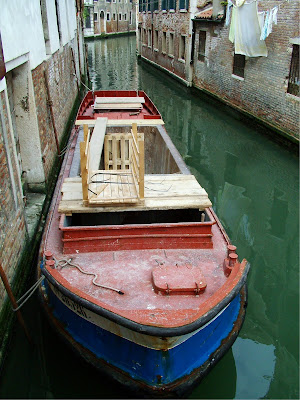 So we start walking aimlessly looking for a number in a haystack, soaked rats from sweat and rain. Not really walking either. Because every 100 yards we come to another bridge and have to carry our luggage like pieces of furniture. I regret that the fact that the only thing we forgot to bring was a forklift. 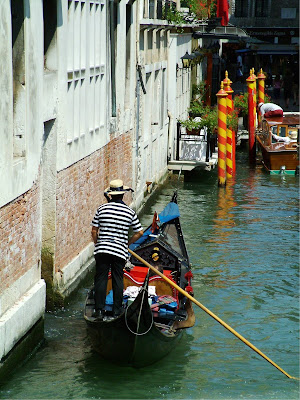 I keep looking at the soggy map I bought in Firenze and discover another incongruity. Maps of Venice bear no relation to the actual layout of sidewalks and canals. 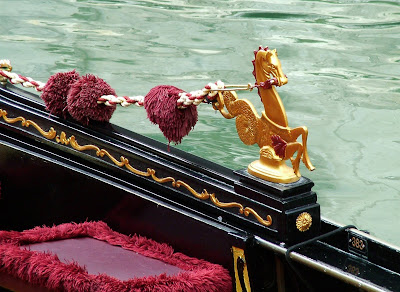 Finally after an hour of aimless, sweat-drenched, and desperate trudging through this jigsaw puzzle of unmapped alleys, canals, and random numbers, we stop at a hotel that we wish we'd booked in the first place and we throw ourselves on the mercy of a desk clerk who is willing to look it a competitor on the Internet, if only to get us out of his lobby. 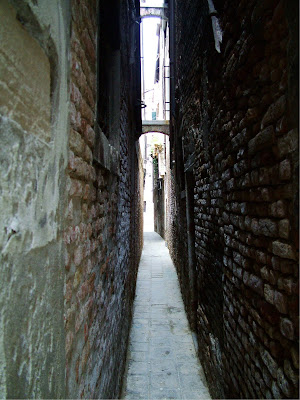 For the first time since I bought my wristwatch three years ago I find an actual use for the incongruous built-in compass that I thought was cute but has suddenly become a real survival tool. We also kept chasing down people who thought we were homeless vagrants and asking directions. And finally we found a door marked: 2006A Casa d'el Molena!

We ring the bell. 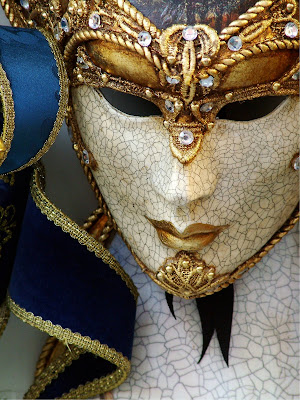 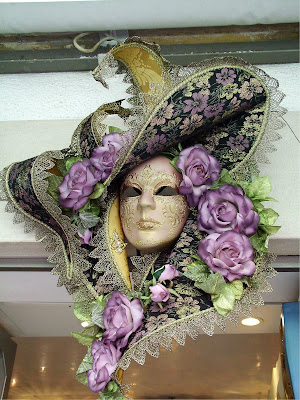 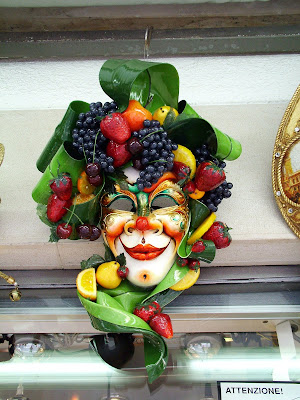 I consider sitting down in the rain and dying on my luggage like a Samsonite Samouri. 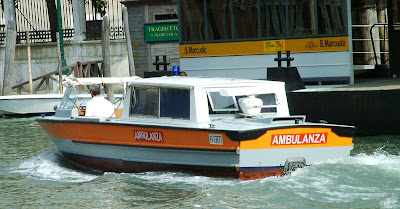 But finally we decide that Karen will stay behind to guard the luggage – although by now I’d pay someone a hundred euros to steal it. I slog back into the maze to find a small tobacco and magazine shop we’d seen -- to plead for help. I stumble into the store like a derelict wino or the ghost of a martyr – St. Mark of the Rolling Trunk -- and place the dripping pages of my internet confirmation in front of a portly woman and moan something like, "Nobody there! Please call." She either takes pity on me or just wants to get me out of her store, but calls the number. Soon she is talking to someone I assume to be either the bed and breakfast landlord or the policia, and I hear the word "Americano" several times. I am relieved to know that probably explains everything...

When Karen bursts in and announces, "They're here! We're in!"

"Thank God!" I exclaim. “Grazi il DioI” exclaims the saleslady backing away from us.

Walking back I ask hopefully if our luggage has been stolen. Unfortunately it is still there, guarded by our new landlady for a week, The Untameable Shrew Witch of Venice…but that is another story. 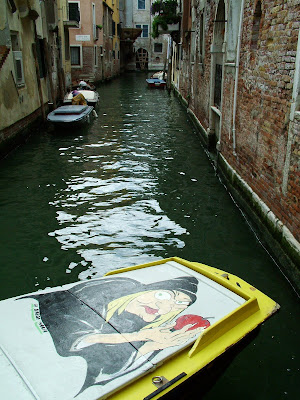 BUTLER: “This was supposed to be a photography post, you know. Not an entire novel.” 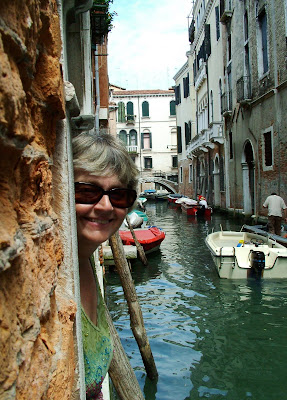 Things did eventually get better, of course

Posted by Bagman and Butler at 2:04 AM