Oh NO! Not more babble about incongruity!!!

I have to confess I have been feeling guilty; because Bagman had been correct. I was seriously thinking of not posting any photographs for the Friday Hometown Shootout. I was feeling guilty because while I had genuinely confused myself by thinking way too much about incongruity, the real reason was that I was too lazy to shoot anything.

So this morning, I shot one picture and ran down to show it to Butler and Bagman. But Bagman was gone! Butler saw me and glanced from his computer to Bagman’s empty chair.

BUTLER: “He gave up on you. He said if you weren’t going to shoot anything for Friday, he was selling his camera and flying to Africa for the week to be with Dorothea. Or maybe it was Alaska.”

“But I did shoot something incongruous. Look at this!” 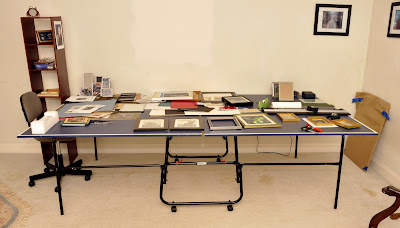 BUTLER: “Hmmm. Not your best work, that’s for sure. It’s a pretty mediocre picture. But I don’t see anything incongruous about it either.”

How could he not see it! I started explaining it to him: “Don’t you remember?! It was a ping pong table! But now we use it as a work table for matting and framing photographs!”

BUTLER: “That’s the best you could come up with? Nobody would even notice it?”

“Will would!” I blurted out, wondering for a moment if I should clarify that “Will would” referred to Barclay’s brother, William and was not a truncated declension of the subjective of the verb “to be”. And I fell, as usual, into a digression. 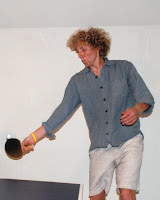 Will’s mother, Karen’s best friend, came two years ago to the College of Charleston and visited us often because he liked us…and of course he liked home-cooking and playing ping pong. He played on the table as much as he could. I think that beating me at ping pong became an obsession for him. I was his Moby Dick with a paddle and I was glad Bagman was not around to turn that into an off-color pun.

He played ping pong at school whenever he wasn’t studying, which was probably most of the time. Toward the end of last year he even won a game or two but never beat me two out of three before I took the table down.

“When I turned the table into a workbench Will was furious!” I told Butler, returning from my digression.

BUTLER: “I see rectangles and right angles, table, frames, mattes…geometrically similar. It is one of the most congruent photographs I’ve ever seen.”

“And what kind of photograph would you think was incongruous?” I asked.

BUTLER: “Something natural juxtaposed with something manmade.”

Usually Butler complicates things but this time it seemed simple and I thought of a photograph I had taken in Venice. I turned and ran back to my office to see if I could find it.

BUTLER (Calling after me): “You’re welcome!”
Posted by Bagman and Butler at 12:44 PM