Well, we didn't actually trim it yet...but at least I assembled it.  Wasn't there a poem about "Only God can make a tree?"   I don't remember that it said nothing about assembling.

Yes, we have reached the point in life where we have an artificial tree.  I remember, as a child, the joy of going out in my grandparent's woods and finding and cutting a tree of our own.  And later, of driving around picking out a tree.  But after doing this over 6o times, it began to lose its excitement. 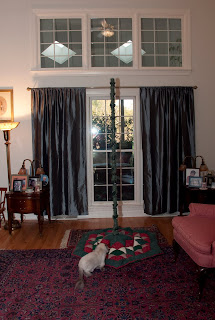 So I bring in the all the pieces from the shed and begin the process of straightening little metal twigs with plastic cedar shaped pine needles.   They get bent in storage so each one must be adjusted by hand.  A long process, but whenever I begin to become impatient, I remember the Christmas in the mountains of Virginia fifteen years ago.

It was the year we decided to get a really "live tree" and then replant it.  Protecting the environment and all that.

The tree farm was run by a 90-year-old minister who was a mountain of a physical speciman and drove Karen, me, and 8-year-old Brian out on his tractor into a wilderness below his house. 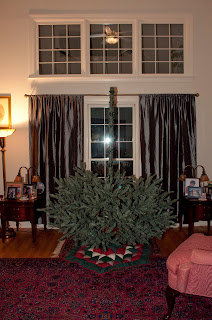 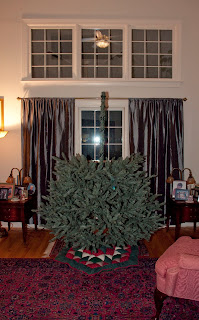 Did I mention it was sleeting heavily and the tractor pushed through mud and ice?  But we found our tree eventually.  Bigger than we had planned.  But we loved it.  I would have loved anything that could get me home and out of the bombardment of ice pellets.

Having identified it, the nice lumberjack preacher handed me a shovel, a pick, an axe and turned to Brian and Karen and said, "You two must be soaked!  My wife has some hot cocoa up at the house.

I'll never forget the first time I pushed the shovel into the ground near the tree, listening to the distant sounds of the tractor disappearing into the darkness.  The shovel went less than an inch into the ground before striking a root.  So that was what the axe was for. 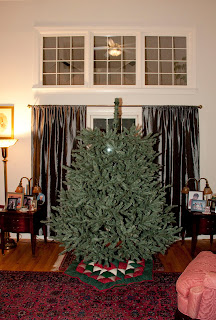 But the advice had been, "try to cut as few roots as possible so the tree will have a better chance of living."

Periodically, I would rest to catch my breath and look up at the house.  There was a brightly lit warm window from the kitchen that overlooked the valley.  In the window, I could see Karen and Brian drinking cocoa.  Sometimes they waved at me.

Eventually I decided that cutting a couple of the roots couldn't hurt the tree too much.  It was becoming a matter of survival.  Mine, not the tree's.

After another hour, frankly, I didn't really care if the tree made it or not!  I hacked, dug, yanked, levered, pushed, pulled, hacked again.

In the end, I'm not sure if I actually dug up the tree or whether the rain and sleet turned the ground so soft the tree just fell over on its own.  I waved at the window for them to bring the tractor.

I waved furiously, jumping up and down and flailing my arms. 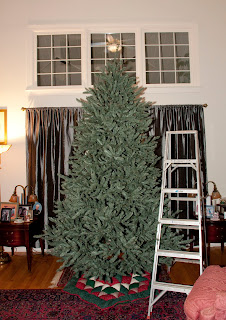 I don't remember much after that.  Somewhere in the haze a tractor appeared.  Later I was driving home and Karen and Brian were laughing about how much fun it had been and how we should do this every Christmas.

It wasn't too many years later that I bought this tree where I can sit on the couch for hours and straighten branches and watch football.

Oh -- I should mention the step ladder that shows up in the last shot.  I wrote a poem about my stepladder a couple of years ago that I'll post here at risk of making the blog too long.

Not only for the Claxton fruitcake,

the Messiah on the CD, and eggnog in the glass,

tree-trimming day is special for being the time

the stepladder receives its annual invitation

to the livingroom, and out of the shed where it spends its days

leaning against unpainted walls with the shovels.

It even consents to have its broken red plastic feet

as it stands, like a farmer, out of place in the company

in a room that’s polished often and used seldom.

The ladder knows its place and stands quiet

and humble, but structure firm,

never trying to hide its rust from stares

It knows my feet better than any Persian,

knows my hands better than any polished knob.

It has held me in storms and sun, to repair windows,

to rescue kites from tree limbs, supported me

for hours while painting and caulking the house to keep

this assemblage of holy furniture from mildew.

In front of them now, it knows itself,

despite the host of crystal coasters that rattle

to the top of the tree where we place the star.

It has sufficient time each year

to calculate the value of the living room crowd

and is always content to slip back out the door,

competent, of course, to never scratch the molding,

on its way back to its home in oil and dirt.

Oh yes...when we eventually moved from Roanoke, the tree was still alive in the back yard.

Posted by Bagman and Butler at 9:37 AM