I noted in my Friday Shootout that Bagman and Butler were on vacation.  I was wrong.  I found out today that they have been hiding in the Secret Basement Bunker reserved for catastrophic blogspot faux pas.  By the way, is the plural of faux pas "faux passes" or is faux pas the plural which would make the singular "faux pa" which sounds like it should mean "false father?"

While digressing, the haggard, hungry Butler and Bagman drag in with frightened eyes.

BUTLER: "Is the attack over?"

BAGMAN:  "At least Mark survived!  We tried to warn you but it was too late!"

BUTLER:  "Our first clues at what was coming were the alien markings we saw a week ago."

I consider suggesting that they might have warned me then, but since I was totally confused anyway, I held my tongue.  (Holding my tongue slowed my writing since I had to type with the other hand.)

BAGMAN:  "Look at these alien messages that appeared on the front lawn!" 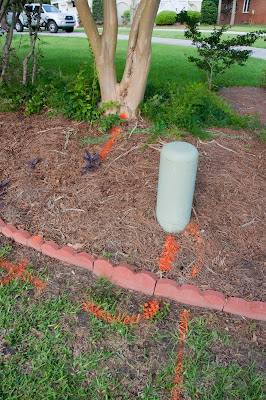 BAGMAN: "And this one pointed straight at our house!!"

At this point I'm growing concerned.  I've been worried that we might come under attach from Nan U's killer rhubarb.  But I continue holding my tongue -- switching hands from time to time to prevent fatigue.
BAGMAN:  "We were hiding and peeking out the front door..." 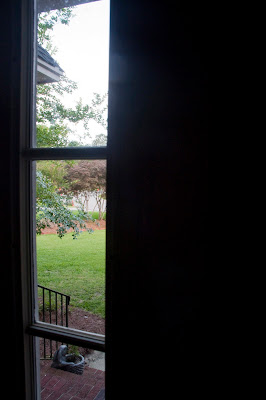 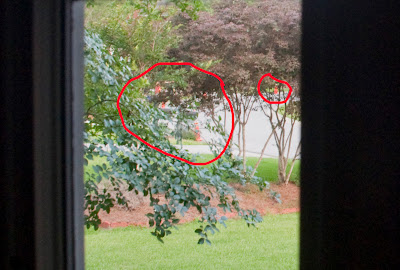 BUTLER:  "They had heavy armor! 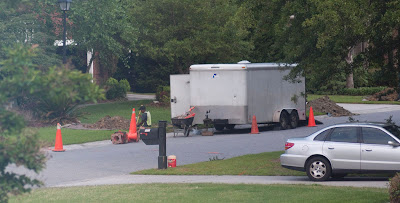 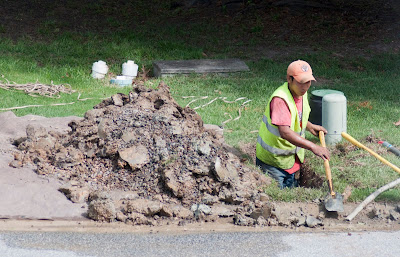 BAGMAN: "Within minutes they were attacking the yard across the street!"
﻿ 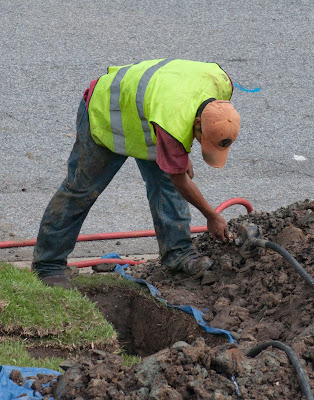 BUTLER: "Then they were in our yard!"
BAGMAN: "But we weren't giving up without a fight so I convinced Butler that we should go and scout it out! 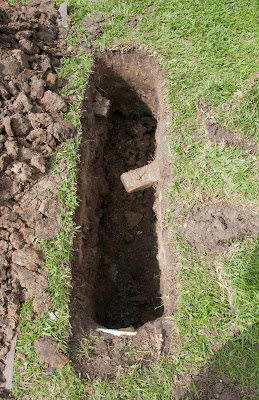 BUTLER: "This is what they did to our yard next to the driveway!"
At this point, I am impressed and convinced that they must be aliens.  I've dug many holes in our front yard and give up after I hit clay three inches down.  This hole was chest deep!  No human could do that!  I'm also wondering what the pieces of wood are?   Has our neighborhood been built on top of some prehistoric city?
BAGMAN:  "We crawled through bushes down the street to document what the attackers were doing... 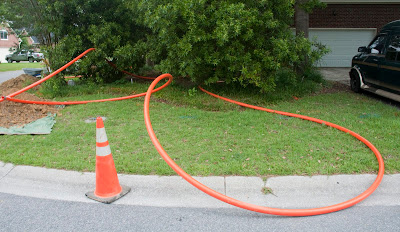 BAGMAN:  "...AND DISCOVERED THIS!!!!"
Everybody say:  "Ooooooooooo!"
BUTLER:  "We tried to get a better look at where they were coming from... 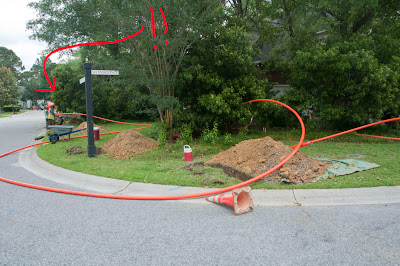 BAGMAN: "But they spotted us!" 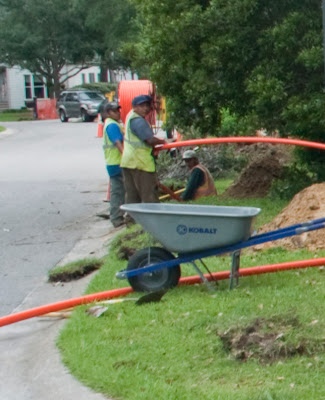 BUTLER: "That's when we took off and hid in the bunker.  Are they gone yet:?"
I look out the window and cannot see a thing out of place.  The holes have all be covered and the sod replaced and there is no evidence that they were ever here.  Or maybe Bagman and Butler were dreaming.  "You sure about this?"
BAGMAN:  "Yes!  And now the attackers have left orange pipes underground everywhere!  They are probably spying on us and listening to what we are saying at this very moment!
"Surely they must have more interesting things to do," I suggest.  "Or maybe it has something to do with the telemarketer who called me last month and tried to get me to change my satellite television service to Knology Cable?"
I realize that I am no longer holding my tongue and both hands are free.
Posted by Bagman and Butler at 1:00 PM