Since the boys and me are communicating more, I stopped down to the studio just to chat and see if they had any ideas about the Friday shoot.

I nod politely...or maybe I should say "me nod politely".   And I look over at Bagman.  He just glares back.

BUTLER (leaning over and explaining quietly):  He's upset about the Navy Base Blogs.  We did the houses and then you told the hawk story...

"Against my will," I remined him.

BUTLER: "It doesn't matter.  Bagman just feels left out because he had been working on some pictures from that day as well and we were ignoring him."

"But we need to work on hearts for Friday," I whisper back.

BAGMAN: "I heard that!  And I'm posting my genius art first!!

"Did we really take that many different pictures at the Navy Base?" I ask Butler.

BUTLER: "You know you don't get out much and when you did, you kind of went trigger happy."

BAGMAN:  "Stop talking or I won't have room for my pictures.

We both shut up and leave the post to him. 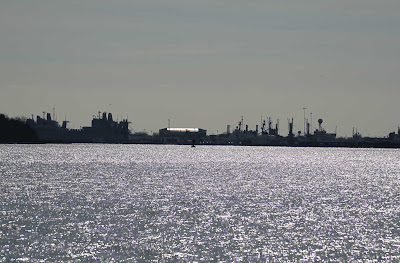 BAGMAN: "And since Mark is always upstairs playing with that baby, diapers and bottles and things,
I used his Photoshop.  DON'T LOOK AT ME LIKE THAT!  I CAN USE IT IF I WANT!  And I cropped it and made a black and white.

BAGMAN:  "And then I...well, I don't know exactly what I did.  I just pushed buttons.  Real artists can't be expected to know what they're doing!  DON'T LOOK AT ME LIKE THAT!" 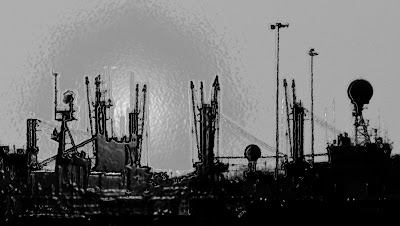