More on the Navy Base...and, okay, the hawk

I'm about to go to sleep and the phone rings.

BUTLER: "Aren't you going to do the blog about the hawk?"

I'm befuddled.  First of all, it is the first time that Butler has ever called me.  Secondly, when I'm about to go to sleep, I'm sometimes already asleep -- the line between waking and sleeping if very fuzzy for me.

"I wasn't planning on doing any more blogs this week until Friday," I say.  "By the way, how did you get my number."

BUTLER: "Dumb question, Mark.  I live in your head.  Anyhow, you mentioned it in your last blog and Heidi said she couldn't wait."

So I schlep downstairs, vaguely wondering about the word "schlep."   Butler already has the computer warmed up.

Okay.  So here it is.  I went to the Navy Base originally to shoot the sculpture exhibit they put up every year, although why they do it in February, I'll never know.  It wasn't very good.  I only shot one of the sculptures. 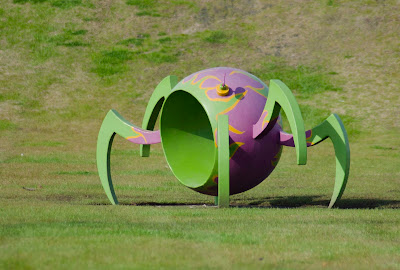 It didn't compare with the permanent sculptures they have there: 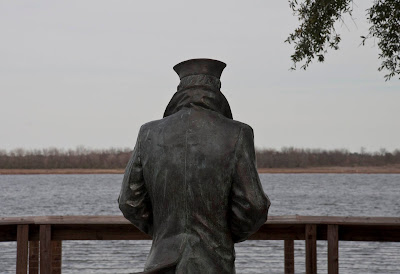 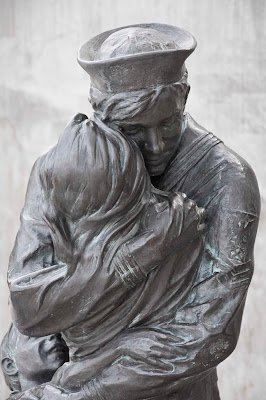 Homecoming
And then I saw a hawk fly into a tree.  I grabbed my telephoto lens and...you know, this really isn't that entertaining a story.
BUTLER: "Just tell it.  You can't renege on a promise."
Okay, okay...so I walked around the tree and couldn't find it.   There was also a city worker there whose job was either to supervise the folks who were edging the walkways or... 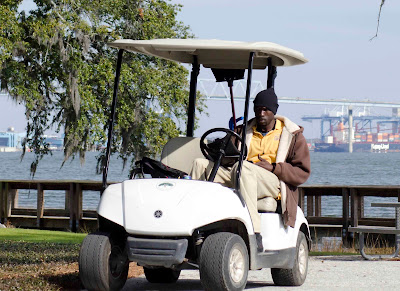 ...to sit all day in his electric cart texting on his cellphone.   At least he never moved for the entire time I was there.  But, in case one of his supervisors ever reads this blog, his customer service skills were wonderful.  You can't tell it from this shot but he had a killer smile and a great sense of humor.
I asked him if he saw a hawk and he said there were several hawks that nested in the trees around that area.  He said they drove the squirrels crazy.  So I looked harder and found it. 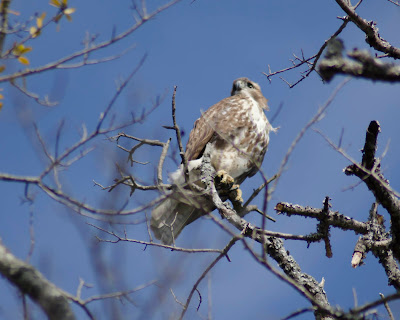 It was so visible, I don't know how I missed it the first time.  Then...aw phooey...I don't know how to make this story halfway interesting.
BAGMAN (entering the room, rubbing his eyes):  "Just listen to Butler and tell it, post it, and go back to bed.  You're keeping me up too!"
Anyhow, since I had some time on my hand and the light was good, I decided that I really wanted a shot of the hawk flying.  After all, the hawk had to fly sometime.  I set the camera for high speed multiple shots and sat down on a bench, pointed the camera at the hawk, and waited.
...and waited
...and waited.
At one point I said to the city worker, "He's got to fly sometime, doesn't he."
The guy gave that big toothy grin that doesn't show up in the one picture I took of him and said, "They can be very patient."
"Not as patient as me!" I said.  The guy just laughed and went back to texting or playing a game or whatever he was doing.
After awhile, my arms got tired.  I switched positions.  I thought about putting down the camera but decided that I'd miss the takeoff...beautiful hawk wings just beginning to unfurl in the warm sun.  So I kept the camera pointed at it.
Eventually I put down the camera, held it at the ready and just stared.  My neck was getting sore.  But I kept staring at the hawk.  When it did take off, it would make a beautiful picture.
Then I quit staring at the hawk.
Then I took another picture.  (Actually I had already taken twenty pictures already but they were all the same with slight differences of head position). 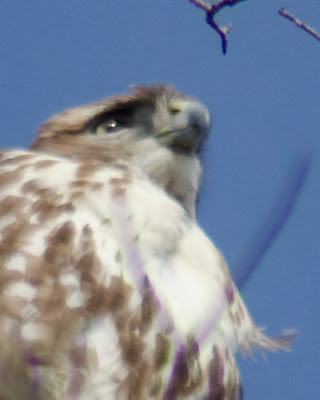 At least he was awake.  After ten more minutes, I considered throwing something at the stupid bird!  Another ten minutes and I decided that I would never be a true nature photographer.  I stood up and started to walk away.
The guy in the golf cart called, "I told you they were patient."
I figured that he was an expert on patience since he had not moved in the golf cart the entire time and showed no inclination to do so now.
"I'll be back!" I shouted, shaking my fist at the hawk.  "Next time I'll bring my own squirrels!"
The guy in the cart laughed and waved.  I went back to my car and put my camera and tripod in the trunk.  And, of course, as I closed the trunk, the hawk swooped over my car and up into another tree.
The hawk was laughing as loudly as the guy in the cart.
Can I go to bed now?
BUTLER: "Be my guest.  And thanks.
﻿
Posted by Bagman and Butler at 11:15 PM