I come flying into the B&B studio, screeching to a stop at my computer.  But I'm not as fast as Bagman, who enters so fast that it takes a second for his clothes to catch up with him, just long enough for me to wish I hadn't been looking.  It will take a while to forget that image.

Butler, of course, enters at his normal, sedate, and precise speed.  He has already determined that blurriness is not his thing.

He is really into this one, running around the room and whirling so fast that the long nasty overcoat he uses as a bathrobe keeps flying open around him making him look like a huge dark bird with a beard and a...OH GOD!  My head swivels away in a flash when I realize he's wearing nothing under it.  I vow to stare at nothing but the screen until I can get this shoot posted.

BUTLER (calmly): "I'll be over at my desk sipping my tea if you need me."

BAGMAN (beginning to pant): "What have you got!!  (I hear him banging into the bookcase and books falling to the floor, but do not look up.)

Not much, actually, I think.  I realize that most of my shooting life, I've worked on stopping motion, on making things sharp, on capturing and freezing the moment.  I remember one shot appropriate but entirely accidental shot that fits perfectly.  I've already used it but what the heck... 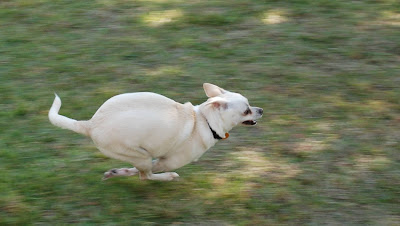 "Okay.  We're done," I announce.  "That's it."
BAGMAN (flying by my desk so close and so fast that papers fly off in the backwash...which reminds me that Bagman's back probably could use a wash.  But I'm keeping my head down):  "Done?!!!  Done!!?  We're not done!! Go through the archive!"
"Too many pictures if I don't know what I'm looking for."
BAGMAN: "We can do it in a heartbeat if we really hurry!"   Bagman is so frantic that he eschews his desktop and grabs his laptop, working the keys with one hand, holding it with the other, and continuing to spin while I smile happily having finally found a place where I can use the word "eschews" in a sentence.  Butler nods approvingly.
Just out of curiosity, I look at the properties of my Image Studio data and my mouth drops open (quickly of course, so that my teeth blur with the movement.  According to my computer, in my photofiles, I have 18,485 files in 263 folders!   I know that lots of them are duplicates and saved originals, but that is insane!!  I shout, "Bagman!  You'll never scratch the surface!"
BAGMAN: "Done!"  And photos start appearing faster than ever before on my computer screen. 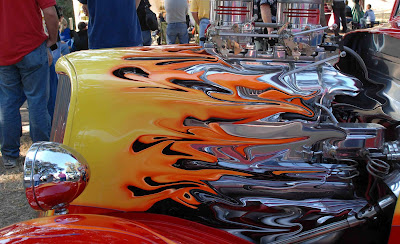 Heavy-handed photoshopping - not sure why I even saved it
(saving everything is probably why I have 18,485 files) 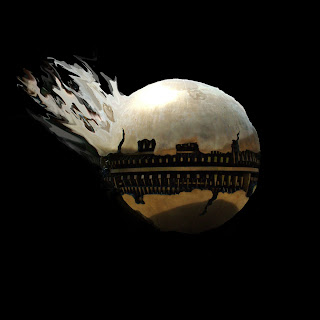 More heavy-handed photoshopping
"I told you, Baggie, that we didn't have much camera blur stuff.  This is all just stuff we were playing around with.  I liked the orignal better although it never really grabbed me." 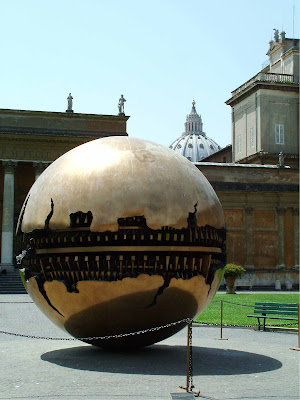 A modern sculpture that seemed out of place
in the courtyard of the Vatican Museum
BAGMAN: "Stop talking and move, dammit!! 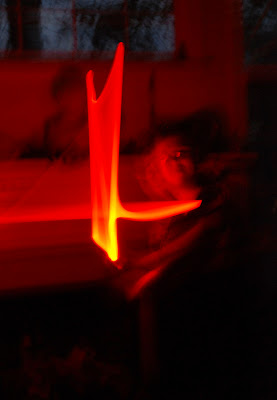 Thomas with his light saber a few Christmases ago 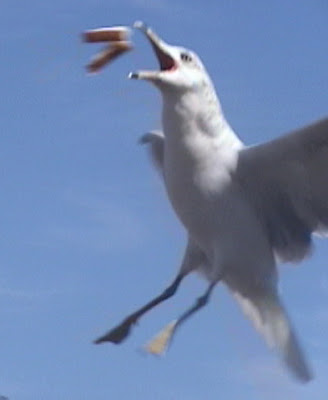 Gull feeding - I originally discarded this BECAUSE of the blur 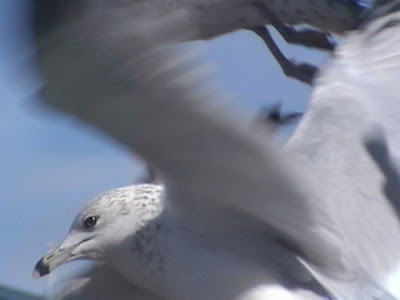 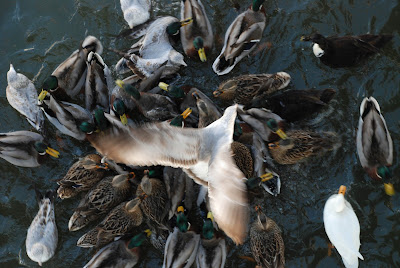 Feeding frenzy over bread in water
All of a sudden the computer screen goes blank.  Well, not actually blank. It just stops doing anything.  The stillness is shocking.  Gathering my courage, I look up.
Bagman has passed out cold, lying on his back in the middle of the B&B studio floor, his trenchcoat, unfortunately, open.
I hit the post button and look over at Butler who has finished his tea and is dabbing the corner of his mouth with a napkin.  "Do you think we should cover him up before we leave?" I ask.
Butler just looks at me and rolls his eyes upward.  He and I leave quickly, turning out the lights as we go.
﻿
Posted by Bagman and Butler at 12:27 PM