Endurance, survival, and walking Conner and Daisy in suburbia

We were in the middle of a wonderful visit from all three grandkids.  But the tension was beginning to show between Conner and Noah, between the kids and us, between us...any conbination you can make.

BUTLER:  "That would be six possible combinations."

It was showing with the kids.  Conner and Noah had stopped playing with their toys and began a war of possession.  Then Conner piled them all up in the middle of the room. 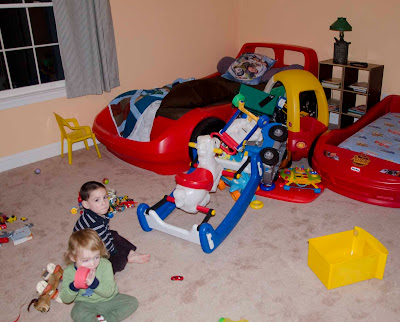 Stand-off
Noah protecting the red bowl
Conner eyeing the crazy man
It was showing with me.  I had surrendered to any pretense of wisely dispensing justice and discipline.  I had sunk to the level that wherever I was in the house, if I heard any sound from any source, anywhere in the house, I simply screamed, "Hey!  Noah!! Conner!!  Cut that out!!"
Daisy had stopped barking when she saw dogs and their owners walk by and was under the bed wondering why we'd changed her name to Noaconner.  But she usually sleeps under the bed most of the time when the kids are here because she just gets overlooked in the chaos anyhow.
Daisy, by the way, is a rescue dog with PTSD.  People always say she looks cute but, although I'm fond of her, I don't need to think she's pretty.  People ask what she is and I say she's a combination of wire-haired terrier and opossum with the coloring of a hyena. 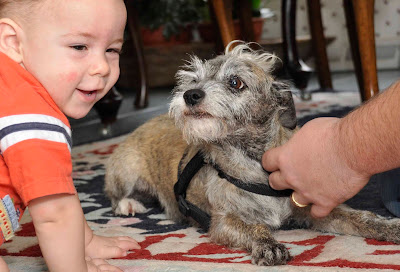 Yeah, I know...cute dog...I've heard it before.
By now, however, the constantly stratigizing Karen had come up with a win-win-win solution.  She would take Noah and Kay to Wal-Mart and I would walk the dog with Conner.
Daisy is excited.  Conner is excited.  We start down the street with Conner running ahead, looking back and calling, "Go!  Go!  Go!
Usually, alone, my long walk with Daisy turns back after a half-mile.  But when we reach that point, Conner start to have a fit.  "Go!  Go!"   I agree to go another quarter mile to the gazebo where we sit to catch out breath.  Okay, we sit so I can catch my breath.  When we start to go back, Conner is still adament. He wants to go further.  I try to explain that the further we go the further we have to walk back.  I know he doesn't understand what I am saying, but I say it anyway.
Another quarter mile and we reach a point where it is shorter to go around the neighborhood loop.  Conner takes off running.  We walk a quarter of a mile and 100 yards and Conner suddenly stops.  His feet hurt.  His legs are tired.  He's done.  He reaches up to be carried.
I reach down, not for him but for my cell phone to call Karen to pick us up after Wal-Mart.  Conner weighs 41 pounds.  And I'm no longer the guy who bicycled around the entire coast of Nova Scotia.  I discover that I left my cellphone on the kitchen table.  I also realizse that the temperature has dropped. It was probably still 50 degrees but we in the deep South think that is nearing absolute zero.
I take a breath, pull Conner up against my hip with one arm and start slogging.
My arm rapidly turns into Silly Putty.  I switch hips.
Then I try piggy-back.  That works better although Conner has now decided that he is completely helpless and can't hold on well so I need to hunch over and reach back to support his constantly slipping butt.  Meanwhile we are in a part of the walking trail where Daisy is rushing from left to right to scare squirrels and when she returns she always runs behind me tangling her leash so I have to pivot in circles.  People pass me and I know I look like the Hunchback of Notre Dame practicing to be a Whirling Dirvish.
With 3/4 of a mile to go, sweating and panting, my back gives out.
BUTLER: "Your back was sweating and panting?"
You know what I mean!  So I hold Daisy's leash between my legs, use both arms and lift Conner up to my shoulders where he sits like a circus act.  He won't hold my head for balance because it is sweaty and, in his words, "Eeeuuu."   So I clamp his legs in front of me with one arm while containing Daisy with the other.
Conner is now whining and crying that he wants to go back home.  Back home.  He can't be convinced that I know the shortest route from where we are and he thinks I am an idiot who is taking him further and further away from home.   "It's a loop," I say.
Without a clue as to the meaning of loop, he says, "Go back!":
So I explain the concept with a well known communication strategy.  I speak louder.  "It's a LOOP!"
Exhausted and tired of turning in circles, I start jerking Daisy's harness when she starts to go for a squirrel.  Conner is just crying.  My walking stride begins to look like someone in the desert about to become buzzard food.  Walkers, bicyclists, and families pass me on the walking trail now refuse to make eye contact.
Conner decides the only part of my body that isn't eeeuuu is my ears.  He starts knocking my glasses off.   If you think that's cute, just try picking up a pair of eyeglasses on the ground with a dog in one hand and 41 pound boy balanced on your shoulders.  If we topple over, I think, I'm never getting up again.
A quarter mile from home, Conner falls asleep and slumps over the top of my head, his chin banging on the bridge of my nose.
I've already made the decision that instead of walking around by the road, I can save myself 100 yards by cutting through the back yards of neighbors who live on the cul-de-sac.  Teenagers do it all the time but I feel like I'm trespassing.
And as the house comes into sight, my peripheral vision, blurred by sweat, thinks it sees movement at a window.  I turn and see a 10-year-old girl ducking behind a curtain and running back into a house.  I can just imagine what she is telling her mother.
"Mommy!  Mommy!  There's a wet man stumbling through our back yard!  He walking an opposum and wearing a hat made from a small boy!"
"That's nice, dear."
Posted by Bagman and Butler at 1:00 AM