"We're tenting tonight on the old camp-ground
Give us a song to cheer
Our weary hearts, a song of home
And friends we love so dear.

Now I prefer the nearest hotel.  More precisely, my body demands it.  Heck, I have enough difficulty getting out of bed in the morning.  It is an exercise of moaning, stretching, groaning, stumbling, and, yes, occasionally using bad language.

The last time I went camping was in 2006 on a three-day adventure with my son (before grandchildren) in the Marion National Forest. 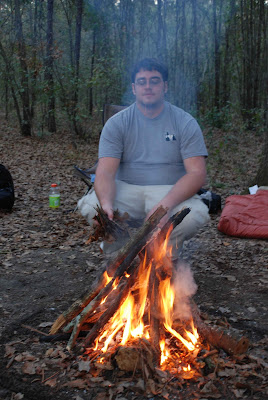 While the traditional male bonding element was wonderful, I also learned a few things on that trip.
Although we had planned three (maybe even four days) of adventure, shortly after discovering items 5 and 6, we began talking about Karen's pancakes and fresh brewed coffee and we were back home by 10:00 a.m.
Camping aside, the last time I was in a tent was this Christmas.  We bought the grandchildren a small, inexpensive tent that they could play in. 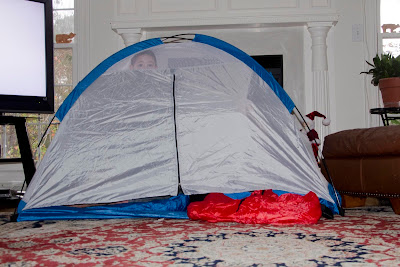 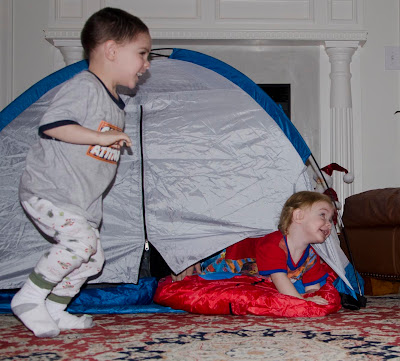 They ran around and crawled and wrestled in it.
By the time Christmas dinner was over, they had pretty much destroyed it.
Which brings us to Monday of this week.
Since I am now retired, I am identified as the only person without a job.  This apparently means that I have nothing to do and am always available to watch the kids. Don't get me wrong.  I love grandparenting but these boys are a handful and 4-month old Kay is a bit demanding in her own way.
Up until Monday I had never been truly challenged since either:
Monday was the Super Diggy Grandfather Challenge!
After the initial diaper changing (I dispensed with neatness and left diapers wherever they fell) and breakfast feeding (cheerios and orange peels all over the livingroom floor), I began the entertainment phase.
The boys had already figured out that I couldn't be in three places at once and were sacking the house like true crusaders.  And in some closet where I had forgotten it, they pulled out the unerectable Christmas tent and presented it.  There were no flexible poles with the tent because they under a pile on my desk waiting for a duck tape experiment which is already doomed to failure.
Faced with the tragedy of not getting their way, the boys employed their most effective tactic -- crying combined with ear-splitting screams.   Kay joined in but only because her diaper was wet.   Again.
If necessity is the mother of invention, parental panic is the father.   And so I joined the crusading Huns and we sacked the garage.  We came away with our loot -- rope and the oversized tarp.
We converted the playroom upstairs. 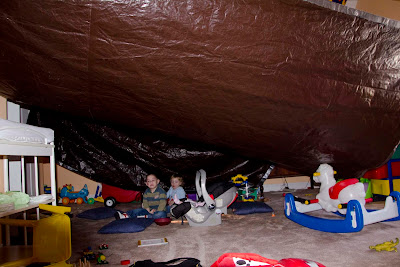 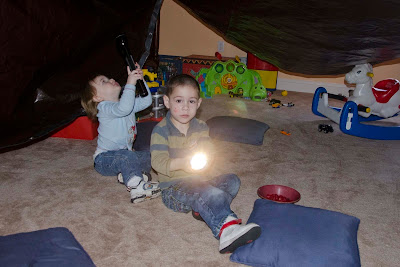 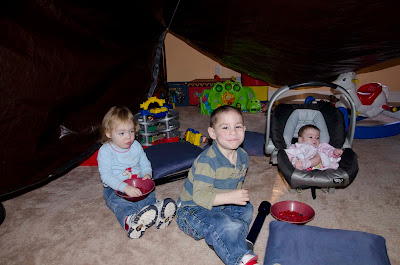 We even had a picnic lunch under the tent -- but I hope their parents don't see this blog and realize that lunch consisted of bowls of candy.  But, hey!  I was outnumbered as you can tell by Conner's conquering smile.
I spent the remainder of the afternoon praying that I wouldn't get a call from a realtor who had a client that wanted to see our house.
Posted by Bagman and Butler at 3:34 PM