A "Meme" from Lulu 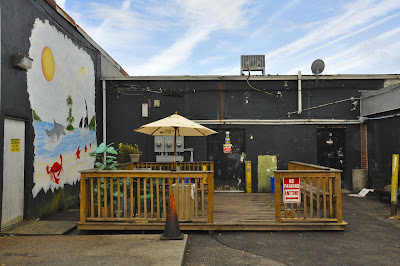 This morning, sitting outdoors at my favorite local café (pictured above), catching up on Blogspot, I found a few of us were doing something called a “meme.” Okay, to begin with, I didn’t really know what a “meme” was, except they seemed to relate to questions and answers. So I looked it up and found the first definition as:

“a cultural item that is transmitted by repetition in a manner analogous to the biological transmission of genes.”

BAGMAN: “Hey! Let’s do biological transmission of genes thing instead!”

But since I can’t follow Bagman’s advice in public, I guess I will do the question and answer thing that seems to trace back to Lulu…but probably goes further than that. This is dangerous, however, because it may be hard for me to answer succinctly…each one could turn into a blog, I fear. I also don’t know why this one is broken into layers.

BAGMAN: “Hey! Let’s at least do the laying part!”

: “Just ignore him and concentrate on transmitting cultural items.”

* Name: Never! You’ll have to waterboard me first! (This might not be a very good start)…okay, I give up. It’s Mark. Most of the time.

* Eye color: Don’t really know…it says “Hazel” on my driver’s license but I don’t know what kind of nutty color that really is.

* Righty or lefty: Only left handed people are in their right minds.

* The shoes you wore today: So far none.

* Your weakness: Women and thinking way too much.

* Your fears: Boredom terrifies me.

* Your perfect pizza: The next one

* Goals you’d like to achieve: Miraculously, I’ve achieved most of them. The sad thing is that I find it harder to come up with new ones.

* Your first waking thoughts: Damn what a great dream I was having and it ended too soon…and get to the computer and log it into the database of dreams I keep.

* Your best physical feature: My smile

* Your most missed memory: The memory I miss most is my own; what was the question again?

* Cuss: Only when it is the most appropriate word for the occasion. Most cussing is linguistic laziness.

* Sing: Only at inappropriate times.

* Do you think you’ve been in love: Since I believe there are an infinite variety of ways to love – Constantly, all the time, with everyone.

* Did you go to college: Yes but it was a miniscule part of my education.

* Liked high school: Yes…I seem to remember that I did.

* Believe in yourself: I think, therefore I am.

* Think you’re attractive: Probably more than most people although I avoid mirrors because they argue with my assumption.

* Think you’re a health freak: I plan to start tomorrow.

* Get along with your parent(s): All my family has long since passed away but I got along with them fine.

* Like thunderstorms: Absolutely! As a teenager, I used to climb high up in trees and let the wind blow me around and watch lightening. Stupid, I know. Digression: My grandmother told me that my mother was terrified of thunderstorms and didn’t want me to be, so overcame her fear and always took me to the window to see them when I was a baby. Probably why I’m gaga over them now.

* Play an instrument: Guitar and banjo some but haven’t picked in ages.


LAYER 4: In the past month have you…

* Smoked: This was already asked in Layer 3, whatever a Layer is – what’s the pre-occupation with smoking anyhow?

* Done a drug: Done? I guess I done drugs before 1976. Now I just done do all the regular baby boomer ones – lipitor, nexium, etc.

* Made out: I’ve made out fine, thanks for asking.

* Gone on a date: In the last month? With my wife, I guess. But we usually call it grocery shopping.

* Gone to the mall: Sure. Another date with my wife.

* Eaten an entire box of Oreos: Layer 4 must be the Layer of dumb questions.

* Eaten sushi: Only after deep-frying it.

* Been on stage: The world’s a stage…but sometimes I need a better playwright.

* Been dumped: Not in the last month…down in the dumps sometimes though.

* Gone skating: This is the point where I’m thinking of quitting meming.

* Gone skinny dipping: Not in the last month.

* Stolen Anything: Not in the last month.

* Played a game that required removal of clothing: As often as possible.

* Been trashed or extremely intoxicated: Prior to 1976, this was my whole raison d’etre.

* Been called a tease: Unfortunately, that’s all that remains at my age.

* Gotten beaten up: Not really. Although I beat myself up sometimes.

* Shoplifted: Not since I was 16 and got caught.

* Describe your dream mate: Karen, of course. (Although if we are talking “dream” see Layer 2). I do still retain an imagination, but enough…

* How do you want to die: I’m reminded of the old joke: “I want to go quietly in my sleep like my grandfather and not screaming in terror like the people in the car he was driving.”

* What did you want to be when you grow up: I wanted to be Ernest Hemingway.

* Name a drug you’ve taken illegally: Who wants to know?

* Name a person you could trust with my life: Karen. And frankly, I’m naïve to think that, if push came to shove, most of my fellow inhabitants on this planet.

* Name a favorite CD that you own: It’s all varied and on iPod anyhow – blues, bluegrass, rock – anything with a fast beat.

* Number of piercings: None, although my surgeon did a pretty good job ripping out my prostate awhile ago.

* Number of tattoos: None

* Number of times my name has appeared in the newspaper: Too many to count. Sometimes as subject, sometimes as by-line.

* Name a past experience that you regret: Every person I’ve ever hurt.

I have ....... Gratitude and passion. I’m particularly glad this “meme” thing is finally over.

Posted by Bagman and Butler at 2:35 PM