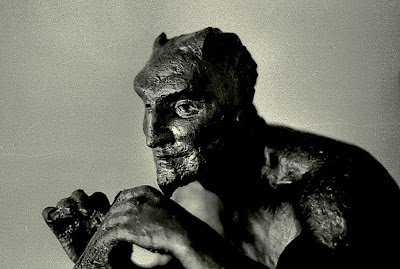 Going through an ocean of old negatives is disheartening in terms of how lazy I've discovered I was back in the darkroom days. There is no span of grays in most of my negatives -- just blacks and whites. And I may have stored them in sleeves but I must have rubbed them in cat hair before I did. But then my art was primarily Bagman and Butler wasn't around to try and clean up the technical aspects.

Anyhow, I did run across these and sucky quality aside, I had to paste them. This sculpture of the Greek satyr God Pan was done when he was a student in Paris. He told me that he had cast it in both plaster (kind of a rough draft) and then bronze as his finished project. I kind of doubt the bronze one still exists because he never saw it again after 1944. 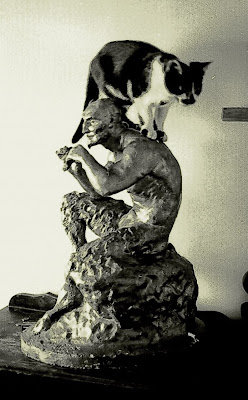 Eventually it ended up, pretty much destroyed, in various storage sheds until eight or nine years ago when I finally accepted the fact that I would never be able to repair it and set it out on the curb to go to the landfill.

I hope my grandfather has forgiven me from his heavenly perch. But it did have a good life. And I thought I'd honor it today.

I just remembered the cat's name -- Fearless Big Jack. I had him in college shortly after getting rid of Alice, my insanely wild stump-tailed macaque...(a blog there as well - but no pictures).

Posted by Bagman and Butler at 7:44 AM