Would you get on a flying saucer?

So it’s around eleven p.m. on a crystal clear night and I’m walking Sally in the back yard where the pond is absolutely still and reflecting just the sliver of a new moon and a million stars. The frogs around the pond are having their usual choir practice and except for that it is quiet. Until, quite unexpectedly, I hear something walking through the thick dark underbrush across the spillway. Deer? Alligator? Serial Killer? Bear? Sally and I both spin into a defensive crouch, eyeing the edge of the trees.

Well, actually, since Sally is quite deaf in her old age, she never lifted her nose from the dirt mound under which was probably a mole. And, okay, it was probably more of a squirrel or opossum rustling sound and not really trees being uprooted by some dinosaur. And I didn’t actually spin or crouch. In fact, the only thing that really happened was I heard a vague rustle and since my overactive mind was looking at starts and searching something to think about anyway, it segued into a typically weird digression: 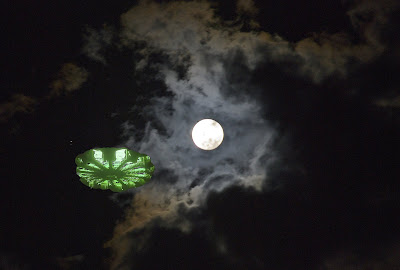 What if a flying saucer landed and I was invited on board – would I go?

Well, heck yes! My first response. An opportunity like that doesn’t come along very often. Once in a lifetime? Or maybe more like once in the history of a species? Sure, maybe it might a risky decision. But I’ll be 63 next month and the choice should be easy! On one hand, explore new galaxies and learn about an entirely new form of intelligent life. On the other hand, watch re-runs of the Andy Griffith Show. Go for it!

Yes, but…what if what I consider intelligent life doesn’t consider that I am intelligent life. What if this “fly me to the moon” invitation is merely food gathering for them. Or a shortage of lab animals.

And yet, even that has a sort of appeal over any of a number of diseases that might be in my future. And if I could at least convince them to give me Internet Access so I could keep my blog up…After all, I’m beginning to struggle to find new and entertaining things to write. I could retitle my blog, “Confessions of a Lab Rat.” Maybe I’d even get lucky enough to be in an alien study of human reproduction?

Yes but…the real kicker would be whether I’d be allowed time to go back inside and pack a bag, get my laptop, and say Goodbye to Karen. Hmmm. I’m not sure that conversation would go very well. It’s not like we ever discussed this as a career move. It’s note quite like, “Hey, Hon, I’m running down to the corner store for a Pepsi and a candy bar.”

Re-runs of Andy Griffith are looking better all the time.

But I’ve never seen a flying saucer yet, so it’s not really a dilemma, I’ll ever have to face. So forget flying saucers. Instead, what if a white glow came from the dark woods and Jesus walked out and said, “Follow me.”

By then, Sally had become bored with smelling moles and was tugging at her leash to go inside and lie down in hopes of getting her stomach scratched, and idea which had begun to appeal to me as well.
Posted by Bagman and Butler at 1:00 AM