I really have been out of touch with Blogspot. And I miss all you guys. Usually I complain about being busy and needing a break and then Bagman makes a comment and then I come back anyhow…but it seems like ages since I’ve read my favorites or posted…No comment, Bagman!!

I’ll pretend I didn’t hear that. Anyhow, I don’t know if I’ll catch up anytime soon so I hope you all are well.

We are keeping the dogs. Roxie has a new choke collar and behaves better. She is housebroken. We are all happy. Sort of.

Below is my belated food shoot out for last Friday…I found this old black and white shot I did years and years ago. A bit grotesque. 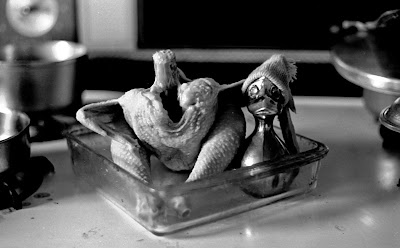 So this morning a friend of mine calls to say he is sorry that he couldn’t open the “Hey! Look at this” attachment I emailed him because his computer’s virus protection blocked it. I told him I didn’t remember sending him anything. But my memory hiccups a lot so I figure I may have sent something during a dog-induced sleep-deprived hallucination.

I get to my office, turn on my work email and, lo and behold, I have a message sent last night from my own home email saying, “Hey! Look at this!” Now I’m concerned because I know I didn’t even turn the computer on last night. There’s an attachment from something called Rapidshare. I start to delete it and then notice that it was sent to me and 83 other people. Unfortunately, I recognize most of them and realize … Holy Crap! I sent it from my home email address to EVERYBODY ON MY PERSONAL EMAIL CONTACT LIST!!!

Except, I didn’t send it! Somehow, someway, some hacker or “bot” accessed my email and used it to distribute this Rapidshare thing to everyone I knew. My heart sinks to think that I’ve probably destroyed the computers of all my friends. Or ex-friends as they probably now are.

I immediately go to my home email and send a message to everyone saying that it wasn’t me…don’t open the Rapidshare attachment, whatever it is. Whatever it is, it can’t be good!

Then I look at my inbox and start reading messages. Most of them are similar. “Hey, Mark, great to hear from you after all these months (years). Sorry I couldn’t open the attachment but my virus software blocked it.”

The embarrassing thing is the “great to hear from you” part. These are folks who I’ve been ignoring. People I like. But not enough, clearly, to stay in touch with. Now they are happy to hear from me but I have to tell them that they didn’t really hear from me. What do I say?

Or, I could lie and say, “Yes! I was just thinking about you fondly and wanted to get back in touch and thought you might like receiving a virus from me.”

And how about the people who didn’t email me…probably those people who were actually able to open the attachment that I didn’t really send and who are now out shopping for new computers and wanting to kill me.

Then I started going over my home email “contacts” list. 83 people. I haven’t cleaned my list in years. Just added people. Who are these 83 people?

9 of them, I knew and regularly correspond with.
19 of them, I knew and still like and might correspond with but usually don’t.
8 of them were commercial email addresses – poetry magazines I had submitted to or some professors at an agricultural extension department of a university I had written to identify a weird insect I had photographed. Stuff like that.
32 of them, I had no idea who they were at all.
13 of them…well…13 of them were…well…people who probably never really wanted to hear from me again for one reason or another anyhow. Nothing really bad. Just people I’d be kind of embarrassed to run into on the street. People who would probably not say “Hey, Great to hear from you,” but rather, “Why the $%@#& are you writing me?!”

“Oh, no reason. Just thought I’d send you a virus. Have a nice day.”

And if I’ve destroyed any of your computers, I’m really really sorry.

ARRRHG! I think I’ll go play with the dogs.
Posted by Bagman and Butler at 3:02 PM