Okay boys and girls, it's Bagman here!  Free from Butler's endless obsession with being proper and Mark's recent episode of chronic whining!  For your viewing pleasure I slipped away -- in case you didn't know, I've very good at slipping away -- to watch Charleston's Annual Stiletto Stomp!

Now jogging is BORRRRRING...but this is a 100 yard dash in high heels and they give a pretty big cash prize for winners -- and costumes.  I think the guy below was looking for bucks for the costume category. 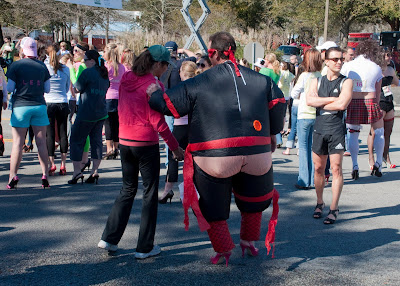 Remember this costume (how could you forget?)
It plays in commentary later in the men's race.
Running in high heels is right up old Bagman's alley.  At least Bagman likes high heels!  Whoooeeee!

The thrill of victory and the agony of de feet.  I got there just as the race began so here's the play by play!

Number 32, looking slick in black, is running hard -- in high heels?  How can she be that fast?  Because the winner gets over $1,000!  At least I think that's what the ad said!  Number 66, the blond amazon who was pushing for second looks like she is pulling up!  Did she break a heel? 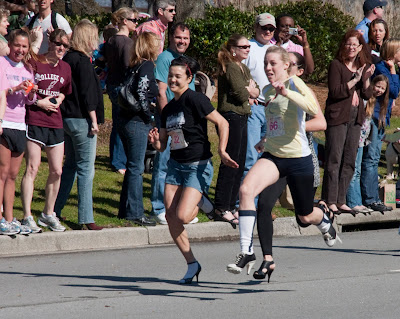 Nope.  But look at those shoes!  Heavy duty serious running heels!  Does Nike make them?  Did I mention the $1,000?  Determination on her face!  Neck and neck.  Old Bagman, here, has to admit I didn't notice any the details until I blew up the photographs.  During the race, I was mostly looking at legs...I can say that because Butler isn't here to stop me!  Bhua ha ha ha! 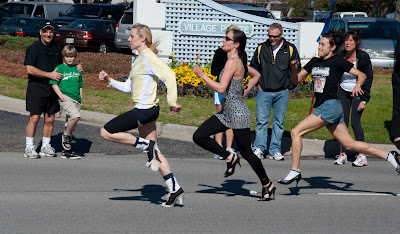 Now in stride, Blondie heads for a victory, followed closely by Demi Moore in a cute dress.  Two other things to notice in the shot above.  Blondi did not break a heel but her high priced Nike running heels peeled off the sole which is flapping in the wind!  Also, you need to notice bystander Steve Martin and his son in the green t-shirt who is jogging in place with excitement.  (You will see more of them.  Here Steve is holding his son back from joining the race.) 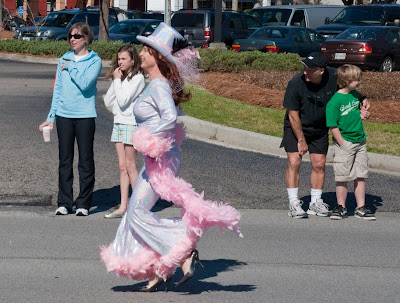 Further back in the pack, the costumes are better and your announcer's attention is drawn to other things besides legs.  He he.  And here Steve Martin and his son have their attention caught by different things.  Get your hand out of your pocket, son.   But no, we've misjuded him.  He's actually looking at the men's race that is getting ready to start.

Even with $1,000 on the line there are not many men prepared to run in high heels!
For some reason, Bagman missed shooting the winners of the men's race.  Could I have been...

...distracted?
But by the time I turned back to the race, there was only the middle of the pack...a rather small pack.

But a rather big middle
(You might want to click on this one to see expressions in the crowd)
Because we now turn our attention back to Steve and his son above.  Steve seems to have become rather more protective of his boy.  Is Steve's silly grin a little nervous? Does he want to put his hands over his innocent son's eyes?  Can it get any worse? 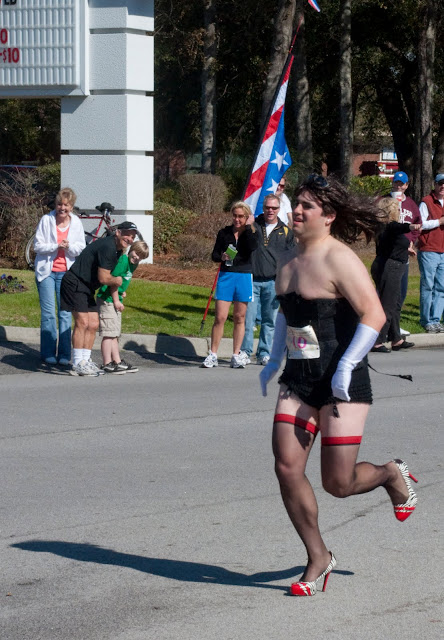 Steve's grin is now absolutely frozen on his face and he is hugging his son so protectively it looks like the poor kid can't breathe!!
And in last place, we finally understand why so few men enter even with prize money at stake.

Despite the lithe strides of the women's race winner,
it is not that easy to run (or walk) in high heels. 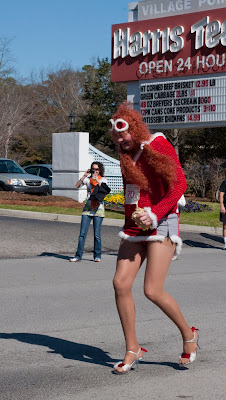 Not easy at all. 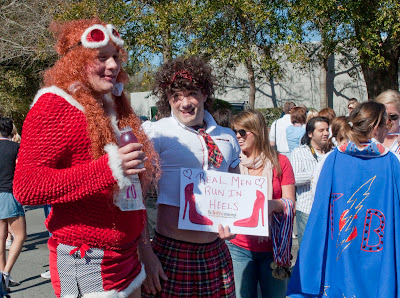 And they need to carry signs to maintain their masculine pride.
So that's it for the Stiletto Stomp.  This is your reporter, Bagman, signing off from Mount Pleasant, near Charleston, South Carolina.
Posted by Bagman and Butler at 1:37 AM