(NOTE: Bagman, who was asleep when I was preparing a shootout for tomorrow, woke up, re-read the guidelines, and deleted the shoot I was originally planning.  He left me a note saying that we should do something different for a change, that we don't always have to be funny and we could do a straight shootout.  Somehow that is not like Bagman, but I guess he has his serious side too.   However, since I had nothing for today, I went back, undeleted tomorrow's discarded blog from the trash bin and tossed it in, unedited and unfinished for today...)


Friday has rolled around again and this week the Shoot-out theme is “Remembrances.” With a fresh cup of coffee in my hand, I drop into the B&B working studio and am surprised because Bagman is not there. Butler, looking a bit surly is at his desk arranging his pens and pencils in neat parallel rows by color and length.

“Where’s Bagman?” I ask. “I’m looking forward to the Remembrances shoot. It’s one of my favorites.”

BUTLER (bored): “We know. You’ve already done it more times than we can count which is why Bagman slept in.”

“I’m not sure I understand,” I say, feeling uneasy.

It did present a problem. And realizing I was getting no help from my two partners, I decided to take a slightly different approach. As I drive around town, I always see streets, intersections, and bridges that are named for people and I’ve often wondered who these people were. I’ve often thought of starting a database of them, looking them up on the net. They all have one thing in common – at some point someone wanted to give them a “remembrance” enough to name some public thing after them.

The problem is that it was already Friday and I had run out of time to do a really comprehensive study of 15,000 street names.

But there was Charleston’s big new (relatively) bridge. The Arthur Ravenel Jr. Bridge. Not that the Bridge is a junior and there is a bigger bridge. Arthur Ravenel’s father was Arthur Ravenel. 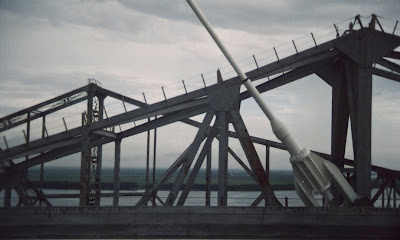 ;
This picture actually shows all three bridges, shortly before the rusty, narrow, scary ones were blown up...or blown down as the case may be.  Or was.

In the very back is the Grace Bridge. It was built in 1929 and most people thought it was named Grace because it only had two narrow lanes and you needed the Grace of God to get across it. But it was actually named for John P. Grace, a former Mayor of Charleston. I’m not sure how great a mayor he was but he was also the president of the company that built the bridge and charged a toll to cross it. I’m not sure why they didn’t name it the “Conflict of Interest Bridge.”

The Ironwork in front of it but behind the new white cable was the second bridge built in 1966 and named the Silas N. Pearman Bridge for the Chief Highway Commissioner.

So anyhow, a few years ago, these bridges were scoring 4 out of a possible 100 for safety. I was driving them to and from work and it was indeed a daily adventure. And then they built the Arthur Junior Bridge. 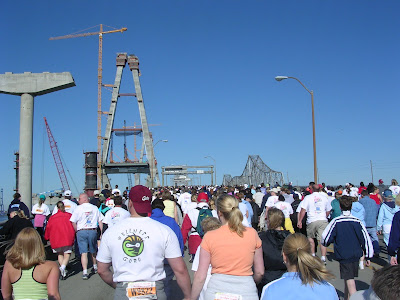 This was the last Cooper River Bridge Run (Walk) before the new bridge was finished.  We were walking on the Pearman Bridge with the Grace Bridge on the right and one of the two towers on the new bridge on the left.
BUTLER (Not bothering to even look up this time) "Yawn Yawn Yawn."
The two big towers were named Grace Tower and Pearman Tower to continue perpetuating the honored names of past political profiteers.

In Charleston we tend to name structures for people who are still living, I guess so they can enjoy their immortality while they are still around. Mr. Ravenel, who was a state senator at the time is now on the local school board. The legislation to name the new bridge after him was passed by Sen. Glen McConnell who has the McConnell Parkway named after him. 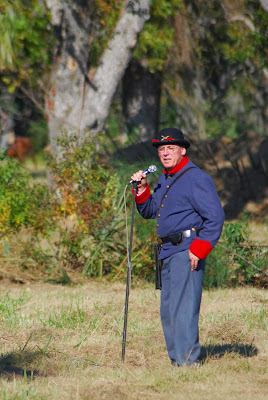 He is dressed this way because his favorite hobby is being a Civil War Re-Enactor.
Posted by Bagman and Butler at 7:57 AM