Shadowshot Sunday - What the heck, why not?

So I've been noticing this addition to the "More ways to use Mr. Linky" fan club.  I hadn't planned to partake but this morning Bagman and Butler either relented in their refusal to let me use my computer because I have been in such whiney mood or they simply fell asleep and left it unlocked in the workroom.

I was going to post a blog in response to some questions about how I take pictures of strangers and if I'm afraid they will be angry that I am sucking images like some paparazi out of their personal space.  I admit that sometimes I wonder if someone will mind, but in another life I was a news photographer for a short time.  So I know -- or think I know -- that as long as I'm in a public place I can shoot anything I want.   But its probably illegal to break into their house and shoot them while they are sleeping...that sounds worse than I meant it.

But I am a gentle, sensitive soul and don't go around sticking a camera in people's faces.  I do like telephoto lenses.  Sometimes I feel like a light sniper.  And often when I notice someone I want to shoot, I pretend I'm shooting something else near them, get the zoom and metering about right, then, at the last second, just turn a little and click one off of them, then turn back and concentrate on the fake subject again.  A bit lily-livered, I know.  (Lily-livered?).

This has nothing to do with Shadowshot Sunday, of course.  But when I managed to get into my computer for a change, I found that Bagman had been off at a very weird Charleston tradition called the Stiletto Stomp and was planning his own post on Tuesday or Wednesday.  Most of his shots were clearly Bagmanish and I couldn't delete them.  But one of them seemed right for Shadowshot Sunday, so I decided to post it early.  He'll probably be mad.  But, what the heck.  Here it is. 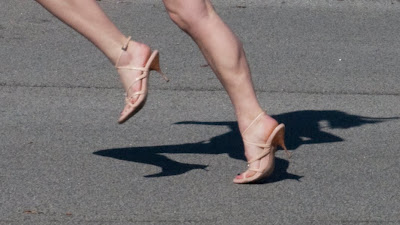 Oops.  I hear footsteps coming down the hall.  I'd better get out of here before Bagman or Butler catch me.  Why am I nervous about using my own computer?  One of these days I'm going to have to have a talk with the boys.  This is crazy.
Posted by Bagman and Butler at 6:13 AM