FU-MANCHU wanats to go on record that he is boycotting this week’s shoot-out. He takes the emphasis on “alternate transportation” very personally and believe strongly that if you can’t go from 0-60 in 5 seconds, you should stay home! 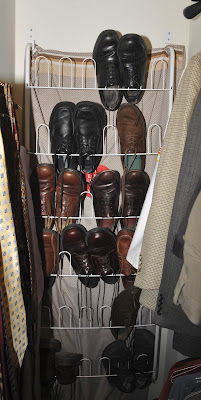 Here is a picture of my shoes. And yes, for the visually astute among you, I do also own sneakers. I was wearing them when I took this picture. 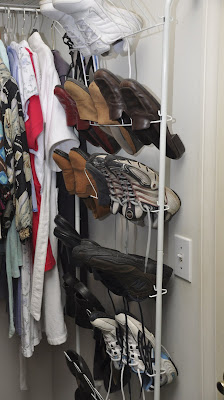 Above is a picture of my wife’s shoes. 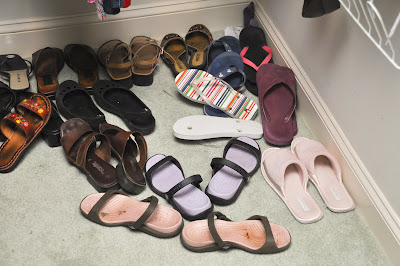 Here is picture of more of my wife’s shoes. 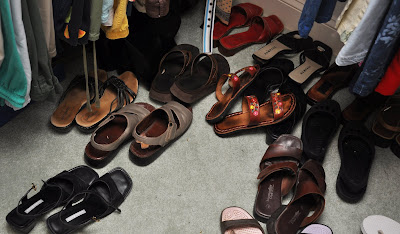 In Charleston, women usually have more shoes than men do because men wear their shoes out. I’ve studied this and the shoes of Charleston women last a lifetime because the feet of Charleston women never actually touch the ground when they walk. This is a corollary of the related fact that Southern women never sweat and are always surrounded by the sweet faint scent of honeysuckle. 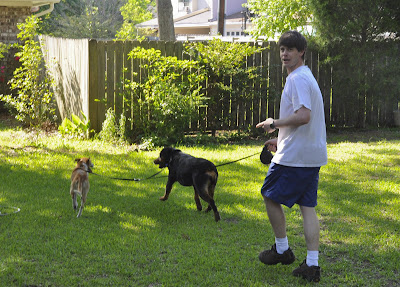 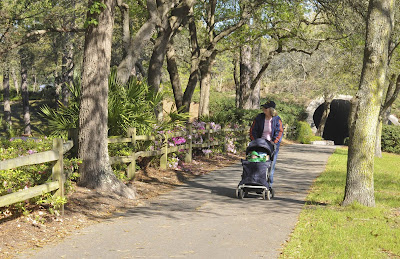 For pre-walkers, there is the alternative “Perambulator” (pronounced: “babuh carrrj”) 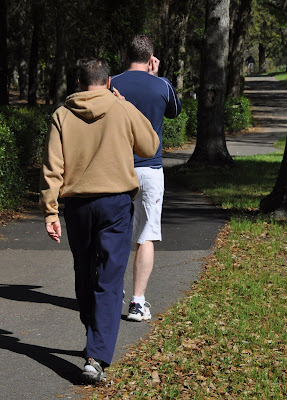 One of the newest walking enhancements is the cell phone. As you can see in the above picture, these two men are now able to actually talk to each other while out for their morning constitutional. 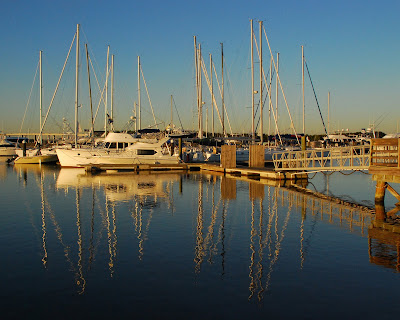 Because Charleston is a seaport at the end of two rivers, most people have boats. I even had a boat myself for a very short period of time during which I managed to (a) run it aground twice and (b) partially sink it by forgetting to put the bilge drain plug back in before launching her. I thoroughly understand the saying, down here, that “The two happiest days in a man’s life are when he buys his first boat and when he sells it.” 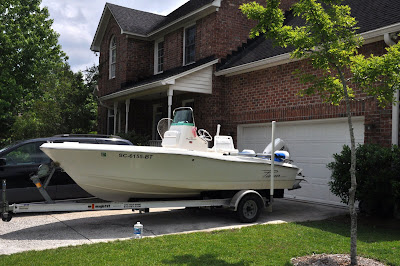 Consequently it becomes important to have a neighbor who has a boat.

It is also important to know how to swim if you fall out of your neighbors boat. 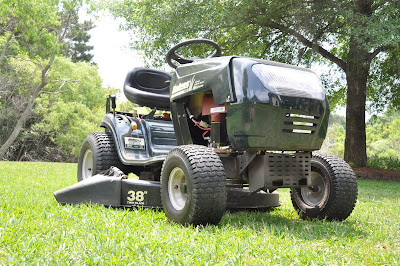 My neighbor may have a boat, but I have riding lawnmower.


Nyah nyah nyah. I guess it qualifies as a kind of alternative means of transportation, at least around my lawn anyhow. It is not really green. Well, in terms of color it actually IS green, but in terms of environmental friendliness it’s not green. I feel guilty using so much gas to mow my small lawn…but not guilty enough to stop doing it. 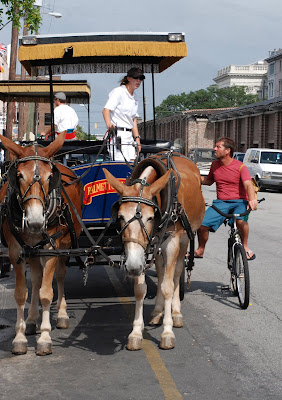 Charleston is a historic tourist town with Southern charm (pronounced: “Suth’n chaam”). Near the old market, you can take carriage rides although these are sometimes picketed by PETA (People for the Ethical Treatment of Animals). After downloading this picture, I notice that it also shows a bicycle. I'll get to bicycles in a minute. But first a bit more on horses and tourists (prounced: "Hoss's ass's" by the locals. Charlestonians revere their history and re-enact it regularly. 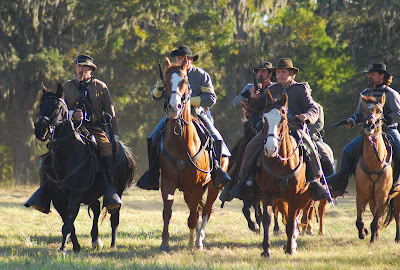 Although these reenacters prefer horses, they do have cars and although I missed the picture, one of their cars had a bumper sticker that read: "Civil War Reenactments - Fighting Terrorism since 1863" 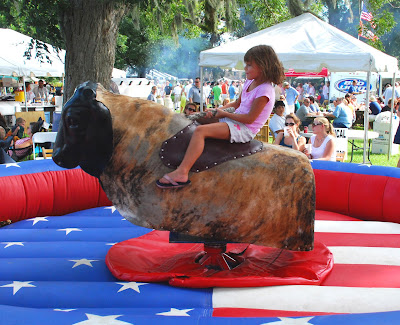 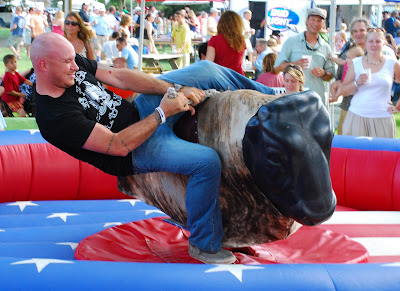 And still don't make it to their destination. 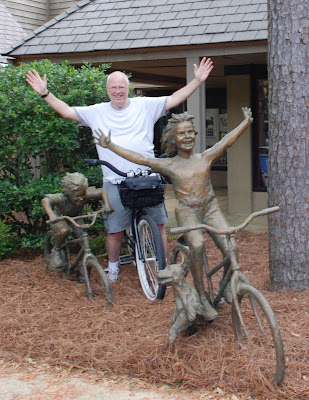 I had originally planned to focus most of my Shoot-out pictures on the bicycle because Karen and I really enjoy the fresh air and exercise of riding. I was even thinking of trying to ride and shoot a video at the same time as I follow Karen around our subdivision. Bagman claimed that I was just trying to prove that I am also capable of appreciating rear ends that I am married to. 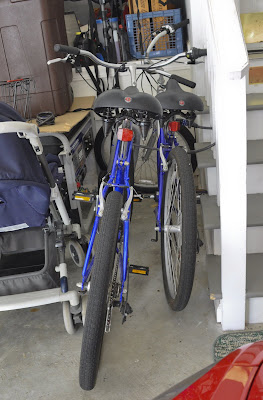 In any case, time (and laziness (pronounced: “Sloth”)) got the better of me and the only picture I could get of our bicycles was inside the garage. Please ignore the cobwebs on them. I couldn’t get them out anyhow because you can see by the angry red in the lower right hand corner that Fu Manchu has strategically blocked them in to express his continued displeasure at this blog about alternative transportation. How many excuses can I create to avoid exercise? 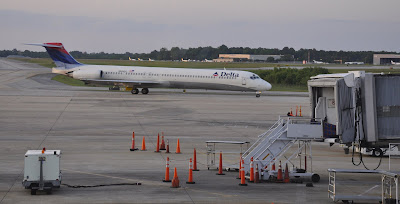 Coming in from Atlanta

If you click to blow this up and look very very carefully, you still won't be able to see Brian, Melody, and Conner waving from the windows as they returned this week from visiting her mom in Montana. 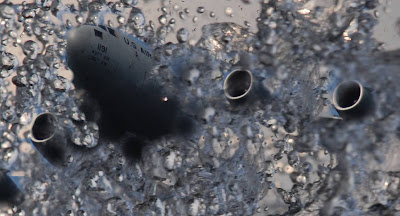 Flying out to the Middle East
Finally, we also have an Air Force transport base here that supplies our troops in Afganistan and Iraq. I should note that, while they often fly very low, they do not routinely fly through local fountains; Photoshop just got the better of me one afternoon.

And lastly (which is different from “finally” and pronounced: “Laahstly”) we have trains and a bus system (which is primarily a tax burden and used by almost no-one) – but time ran out before I got pictures. So coming, full circle, instead, I’ll close with a really sexy photo that Bagman took of his naked foot. 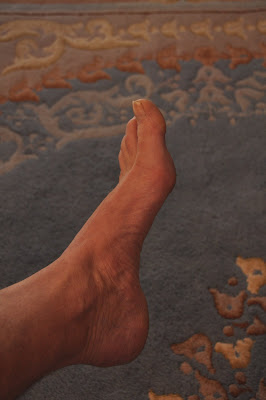 Posted by Bagman and Butler at 2:00 AM