WATER! WATER! A DOZEN OF THE MOST POPULAR THINGS WE DO WITH WATER!
Charleston, SC is in a part of the state called the Lowcountry. In some ways, a photographer's nightmare because it is endlessly flat and I do miss mountains. But there is water everywhere.and we do almost everything with water. 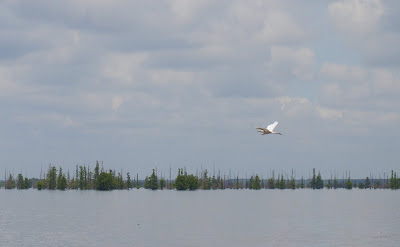 And so, without further ado... 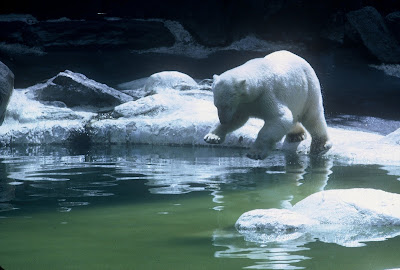 FIRST OF ALL, REMEMBER THAT OIL AND WATER DON'T MIX 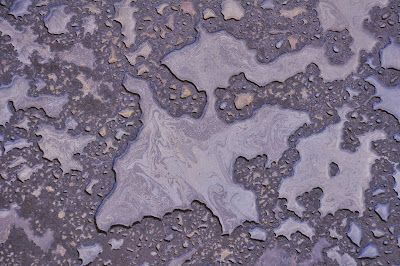 But Bagman says: "If it rains on blacktop, oil and water dance together very sensually.

Sounds like something he would say. So let's try to move this blog along and list the twelve most popular things we do with water in the Lowcountry.
(1) WE BUILD HOMES NEAR WATER
In the Low Country, we often build our houses near the water -- there is so much of it, this is often hard to avoid. But Bagman and I have a tendency to stand on our heads while taking pictures of these houses. 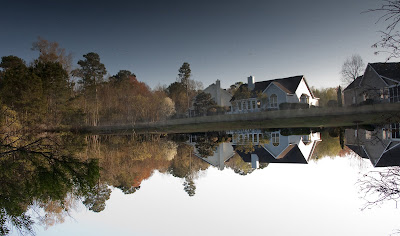 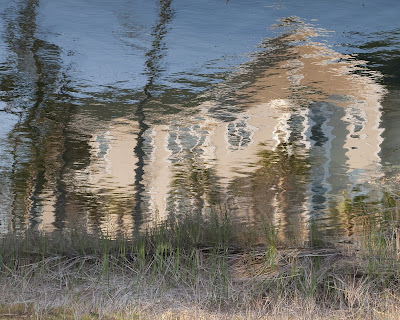 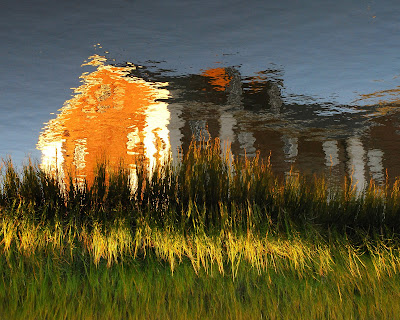 Wait a minute! Who is that below, reflectively sneaking off along the bank? 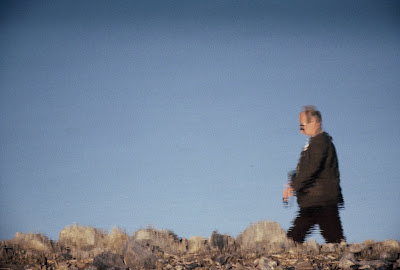 BUTLER: "Be careful, I think it's Bagman in disguise, sneaking off to hide in your bathroom, planning to try and take an x-rated picture of you in the shower."

It doesn't matter. I can't worry about Bagman right now since I have too many pictures and need to move forward or this blog will be endless. Anyway, speaking of building houses near water, sometimes the water becomes a problem and sits in the grass.

(2) THEN WE TRY TO MOVE WATER AWAY FROM OUR HOMES 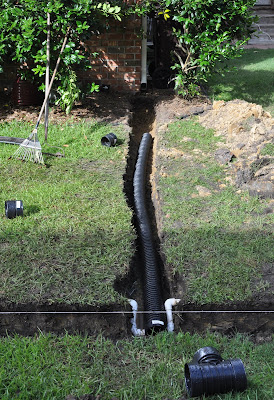 Becuase we live near water, we sometimes have to move water away from our houses. This weekend, my neighbor and I have been sweating (another form of water) to dig a trench between our houses where water accumulates. The black pipe will carry water away from the grass. Ironically we had to cut and re-arrange the white pipes under the black pipes -- the white pipes are the water lines for the irrigation system which pumps water onto the grass.
Does anyone else see something really weird about this plan? 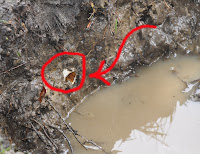 In any case, last night, he knocks on my door and says, "Oh my, I've messed up. I think I just cut your irrigation water line."

Just another little extra work...but, the next morning, looked at where the break might be since we could only identify one end of where he cut it. The other end seemed to have disappeared in a terrible tangle of huge roots and rocks that would take hours to dig through. We worked up a pretty good sweat digging up rocks and roots and trying to figure out where it connected. Until finally, we decided to turn on the sprinklers to see if that will help identify the other end. It was a miracle! Everything worked! It turned out he had cut into one end of a piece of old PVC pipe that wasn't connected to anything on the other end! Enough of dirty water. Let's look at other uses we have for water. 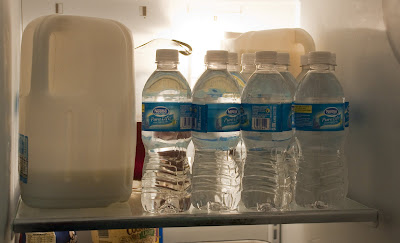 The whole top part of the refrigerator is full of it. 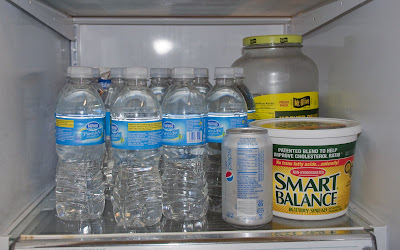 As is the bottom part of the refrigerator.

Don't ask me. And don't tell Karen but sometimes Bagman fills her used water bottles with tap water and puts them back. I tend to drink water at work from a water fountain, or a water bubbler. 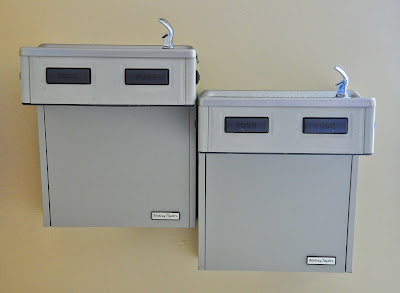 These were designed and installed by government architects (i.e. lowest bidders) and government, of course must ensure accessibility by diverse people. In this case, I usually drink from the one on the left but people who are two or three inches shorter than myself can use the one on the right. It is also a little hard to read, but I still can't figure out why each fountain has two buttons, both of which say: "PUSH." I'm surprised that one of them wasn't written in Spanish or braille.

Sometimes, in the Lowcountry, we use water heaters to heat our water
We put warning labels on them so people will know how to use hot water. 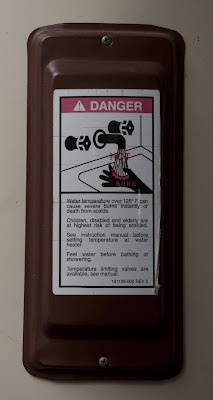 My favorite is (if you blow it up you can read it):
"Feel water before bathing or showering."

BAGMAN: "Psst. Hey, Mark. The shower's just the right temperature. So why don't you take one?"
BUTLER: "Be careful, boss. You'll be sorry. I think he is planning something Baggish.

But I ignore both of them. I've got way too many pictures to post for this one and am trying not to be too boring.
(4) WE COOL WATER DOWN 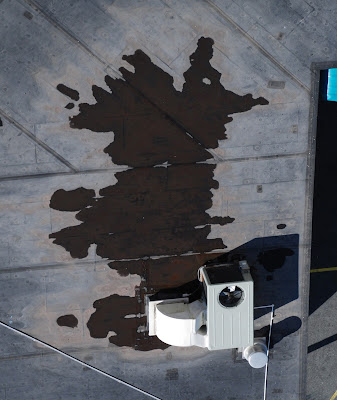 And sometimes the air conditioner leaks in interesting ways

TIME FOR A VIDEO BREAK!!!
(5) WE DRIVE THROUGH WATER and WE SING ABOUT WATER

CAUTION: Do not attempt this at home! This was filmed using a professional crazy driver. Always fasten your seat belt and DO NOT ATTEMPT driving in the rain while simultaneously singing and holding a camera.

(6) WE USE WATER FOR DECORATIVE FOUNTAINS 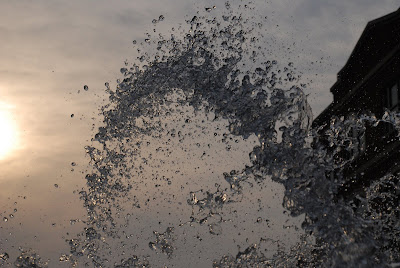 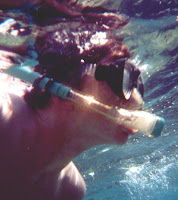 (9) WE DIP OUR BABIES IN SALT WATER 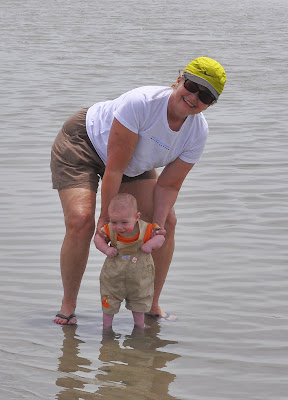 (10) THEN WE WASH OFF THE SALT WATER WITH FRESH WATER 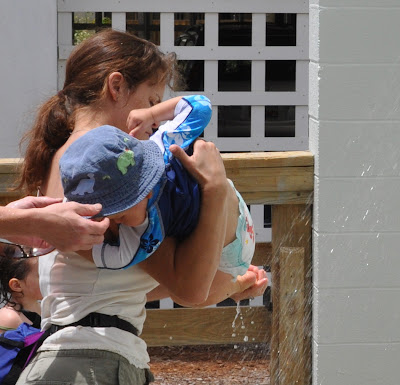 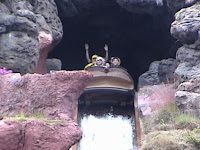 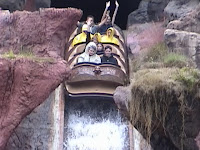 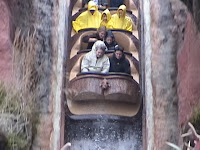 I know, I know, this wasn't really in my hometown neighborhood and it was taken several years and a war ago -- but I just had to add it. I happened to be at a conference in a hotel across the street from the Pentagon that day. The quality is poor because it is a still shot from a very shaky video I took an old small video camera, the only thing I had with me at the time.

WARNING! WARNING! BAGMAN HAS HIJACKED THIS BLOG!
BUTLER WARNS READERS NOT TO LOOK FURTHER UNLESS THEY ARE OVER 18 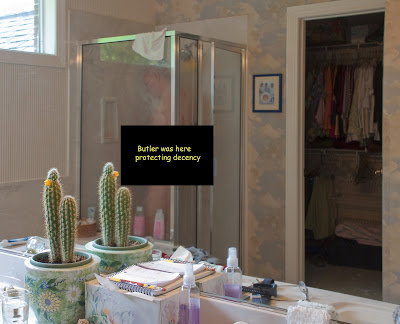 BAGMAN WILL PAY FOR THIS!

So before we bring this lengthy dissertation on water to a close, I want you to know that Butler and I have, indeed, sentenced Bagman to a punishment appropriate to his deed and have locked him in the shower drain for a period of time not to exceed one week. 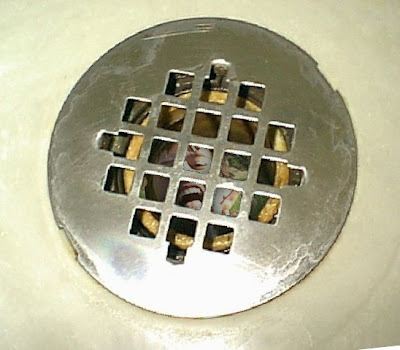 Posted by Bagman and Butler at 9:00 PM