A more bizarre than usual confession

Every morning just before I get out of the shower, I do something that I’ve never told anyone. Not even my wife knows. But there is something about Blogspot that makes me want to bare my soul.

But first, I need to talk about the Yellow Cowboy.

I know there’s a word for this. Imagining or pretending that inanimate objects are alive, or pretending they are alive. Dyanamism? Animism? Just now, when I started googling, however, I begin to find articles on insanity. So I stopped. I’m just talking about an overactive imagination. Creatively entertaining myself. Please tell me I’m not really insane!

But we didn’t have computer games when I was twelve years old. I had to entertain myself with blocks and toy soldiers. Boy, did I have toy soldiers! Big cardboard boxes full. Plastic soldiers, cowboys, Indians, football players…Hundreds. Maybe thousands. Growing up as an only child in a huge old house, I used to stage wars that lasted several days and stretched through several rooms, battalions of little plastic men, fighting in close quarters, chair to chair, lamp to lamp. Holding the high ground of the bookcase to the end!

I’m pretty sure that whoever is living in that house now, 50 years later, is still finding an occasional toy soldier under the floorboard, in an attic wall, or behind the furnace.

Armies have leaders, and the yellow cowboy was the best. He always led the good troops and was always eventually, heroically successful. And over the years he developed a personality…brash, intelligent, courageous. Sometimes, after my grandmother made me clean up the carnage and put all the plastic figures back in the closet, I would keep him out on the bed table, where he and I carried on imaginary conversations about the day. Hmm. Maybe this is crossing into the gray area between active imagination and just plain nuts.

I was ten or twelve, for Pete’s sake! By the time I was 15, however, I was grown up and felt I should stop playing with toys. Actually I decided to get rid of the toy soldier collection when some of my school buddies found them in my closet when they were teasing me about where I might have hidden Playboy magazines and found toy soldiers instead! But even after the battalions were given or thrown away, I kept the Yellow Cowboy until finally I released him in a ritualistic catharsis, a kind of rite of manhood, driving along a country road, telling him goodbye, and tossing him from the window. To this day I hope he managed to make it across the field to become the leader of some other young boy’s army. If any piece of plastic could actually make it across a field, the Yellow Cowboy could. Semper Fi.

This blog is already way too long. is telling me to get to the point. Bagman wants to know about what I do in the shower.

Anyhow, my over-active imagination has continued to communicate with inanimate objects and create little games to add interest to repetitive tasks. Fu Manchu, my Honda S2000 is better than a therapist at helping me process a difficult day at work as we drive too fast on the way home. And, although I am embarrassed to admit it, when I’m really pressed for a difficult decision at work, I sometimes discuss it with Captain Jean-Luc Picard of Star Trek: The Next Generation. 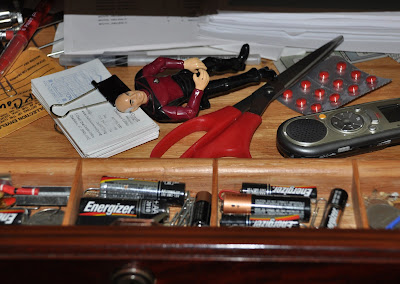 But I’ve put it off long enough. Almost every morning I take a shower and at the end of the shower, I take the washcloth that hangs over the shower stall and use it to wipe down the glass so Karen won’t find soapy streaks. Then I wad it up in a small ball and toss it into the sink where I will use it to wipe shaving cream off my face after shaving. I’ve made this easy toss into the sink, five feet away, approximately 3,600 times (300 days a year, 12 years). After the first 100 times I began to pretend I was a basketball star and the toss into the sink was the final shot in the last two seconds of an NBA playoff.

But that was too boring and I needed more to get the adrenaline up early in the morning. So I animated (or whatever the word is) the washcloth and it became an imaginary airplane, full of people, flying from to Sink Airfield. If it lands directly in the sink, it is a good flight and everyone aboard deplanes happily to collect their luggage while I shave. If it lands on the edge of the sink, or drapes itself over the faucet, it is a rough landing or a forced landing, and people are not likely to fly Washcloth Airlines again for awhile until I re-establish a reputation for safety. And heaven forbid that I miss the sink entirely and the washcloth lands on the floor. It has only done this three times and I must admit I felt badly all the way to work.

You know, maybe I am a little crazy. I’ll have to ask my favorite pencil what it thinks. After all, I’m 62 years old and maybe I should grow up and stop playing childish mind games. Maybe there is something more adult I should be doing in the shower. Any suggestions? 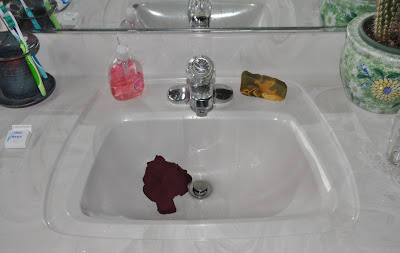 Posted by Bagman and Butler at 5:52 AM