Astronomy in the rain

Thinking about tomorrow's Hometown Aquarium shootout, I was starting to feel like a fish in a fishbowl.  The rest of the country has been getting socked in by snow but Charleston has been getting rain.  Constant rain.

So I went outside to see if the rain was heavy enough that fish might be swimming in it.  I thought I saw  a school of droplet skimmers racing away from a hungry lightening fish and shot off one quick shot.  I didn't take time to focus or anything for fear the rain would destroy my camera.  The risks we are willing to take the for the Friday Shootout! 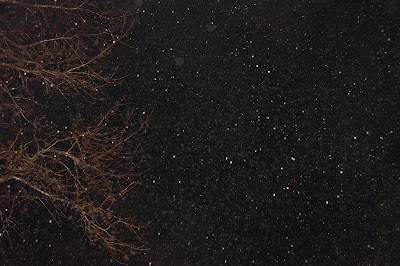 Dang! No fish!  But the camera was intact.
But something struck me as I was looking at the droplets, or what I thought were droplets.  Lately I've been turning green with envy at Harold's new lens and his shots of stars in the sky.  Amazingly enough, I realized that I could spot the Little Dipper constellation in the upper right hand corner of my rain picture -- or maybe it was a star picture. 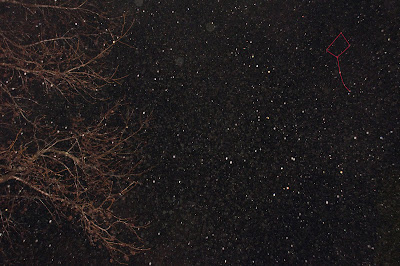 Ursa Minor
(Latin for "Little Dippy Bear" or "Bear holding water dipper"
And since I am a student of the night sky, I knew that if Ursa Minor was in the upper right hand corner, then Ursa Major (Latin for "Big Mama Bear holding larger dipper" could not be seen because it would have been further to the east near the constellation Goldilockus Canae (Latin for "Blond Girl with dog" or "Blond Girl that Orion thinks looks like a dog" -- the scholars are still debating on this one).  However, I had accidentally captured a part of the rainsky to the west where, looking very carefully, I could find Ursa Bagmanus (Latin for "Lock up your daughters").   See below. 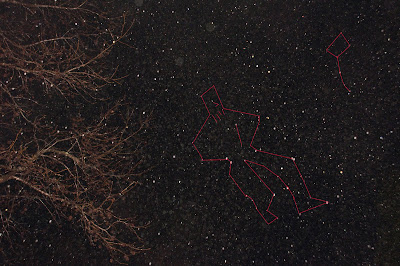