Periodically, I go sifting through the luggage of my past -- boxes of old notebooks and photographs...

BAGMAN: "Yeah.  Periodically.  Right.  Mostly those times when you're too damn lazy or insecure to actually go outside and try to photograph something new!  When your passion is embracing a wheelchair and you're trying to rediscover it in your past instead!"

(Long pause while I take a deep breath.  Bagman can sure spoil a mood.  But I'll continue despite his criticism.)

Yesterday, I ran across two self-portraits from 1962, when I built my first darkroom with the help of my grandfather. 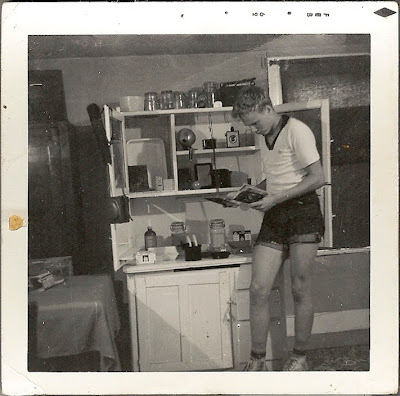 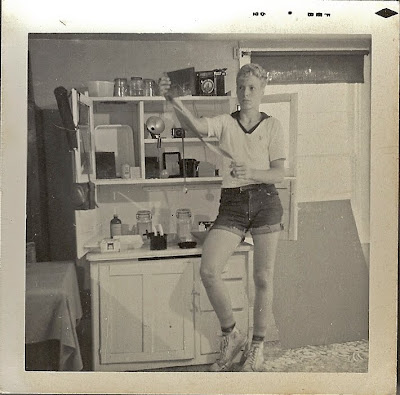 I do remember that my right leg and foor are at a slightly odd angle because my camera didn't have a timer or remote shutter release so I jury-rigged a black thread to the trigger, down the tripod leg and attached it to my sneaker so I could snap the shot with my foot, while pretending to be very very serious.

But I can't remember or figure out what I was pretending to be doing.  Apparently reading in the first shot.  But the second shot looks like I'm pretending to study two things at once.  The stretched out roll of film, however, looks white, more like fly-paper than a negative, and the square thing looks more like a 4"x5" negative...and I know I didn't own that kind of camera.

It may not matter because I was really just posing and trying to look very professional and genius-like.
I really had a huge ego back then.

BAGMAN: "Right!  As compared to now when you are so freaking humble?!  If you think you've misplaced your ego, why are you now posting it?"

BAGMAN: "Why don't you go outside and see if you still remember anything about taking pictures?"

I hate Bagman when he's right.
Posted by Bagman and Butler at 1:33 AM