So when found out I had prostate cancer, I set myself a goal: To lose the cancer even if it meant losing the prostate, regain continence, and pee in a nice controlled way in a bathroom in Italy.  So after goal 1 and 2 were done, Karen and I found ourselves on the Leonardo Express from Fiumicino Airport to Rome.  We had just bought a map and almost felt like we knew what we were doing.  Almost.

If you read yesterday's blog, you know that while I am not paranoid about pickpockets, I do have a couple of things I do when I'm in crowds or unknown situations. (1) I never wear a fanny pack.  Actually I never wear a fanny pack anyhow.  It sounds stupid, it looks stupid, and it goes in the front and my fanny is in the back.  (2) I switch my wallet from its usual place in my back hip pocket to my front pocket where it is close to my black belt tae kwon do hands...and yes I know that tae kwon do is more about kicking with the feet but if I put my wallet in my shoe, I walk with a limp.

The other thing about the Italy trip is that Italy was great but getting there and coming home could be made into a movie with Chevey Chase.  Everything went wrong all the time.  By the time we were on the Leonardo Express we had given up our sanity long ago.  Secondly (or maybe thirdly), we had been told  by everyone to travel light.  Consequently, each of us was lugging one large suitcase which was strapped to an even larger rolling suitcase.  In addition, Karen had a carry-on and a handbag.  I had a laptop in a backpack and a camera bag.  Together we resembled a mule train of bipedal donkeys. 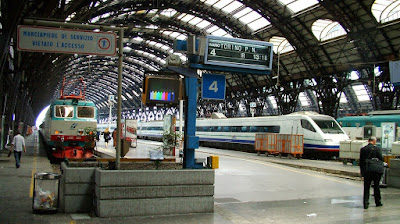 This is actually in Milan
But I didn't take a picture of the Leonardo Express
for reasons that will shortly become obvious
We hadn't bothered to sit down but stood in the midst of a pyramid of baggage near the door of the train, wondering what we had gotten ourselves into.  Since I had already emptied my bladder at the airport, I was considering that I had met my goal and we should just turn around and go home instead of spending three more weeks of indentured servitude as porters.

But the train slowed as it entered the station.  People were trying to get off and giving us evil eyes because our luggage almost blocked the door.  Worst things was that a huge obese man was behind me and was squeezing his way to get to the next car in such a way that despite my liberal upbringing, I suffered an attack of homophobia.

Once he was past me, and had waddled into the next car, I automatically did a little routine pat down of my front pocket and HOLY CRAP!  MY WALLET WAS GONE!  Karen saw me turn white and said, "What's wrong?"
"He stole my wallet!" I shouted.  Now we had split up our cash, more or less.  Some of it was even stashed in a suitcase.  But the majority...the big majority was in the wallet.  As well as credit cards.

This was not a time to be polite.  I pushed people aside and dashed into the next car.  He was not there!  He was too big to miss and, apparently faster than he looked.  I ran through the car and into the next one.  Still not there.  I looked out the windows.  I knocked down a woman.  Halfway throught the third car, after accidentally kicking some poor little kid, I figured the fat crook must have gotten off the car.  I didn't have much time.  I was screaming in my lousy Italian, "Questo es Hombre Gordo?!"  Maybe it was Spanish.

Then I paniced.  What was Karen doing?  Was Karen getting off?  Was she staying on, thinking I was still on the train?  I freaked to think I might never see her again.   The door was starting to close.  No man!  Where was Karen?  I was screaming, "Stoppo Traino!!  Stoppo Traino!!"

I jumped off the train to look down the station loading area, preparing to jump back on!  No fat man!  No Karen!  But wait!  There was a gigantic mountain of luggage off in the distance.  So I sprinted back.  Overjoyed to be reunited with Karen but sinking to realize that half our cash was gone!

As the train pulled away, everybody in the train was glued to the windows staring at me and making various hand gestures.   I looked back and everybody on the platform was doing the same thing.   I imagined the headlines:  "Crazy American Beaten to Death by Angry Crowd."

I wanted to cry.  I slumped down and sat on a suitcase.  It was uncomfortable because of a lump in my back pocket.   My wallet.  When I had bought the map, I had unconsciously put my wallet back where I usually keep it when not in crowds.  I learned that it is possible to feel totally stupid, totally guilty and totally relieved and totally happy simultaneously.  Although Karen's expression when she looked at me holding up the wallet seemed to convey only the totally stupid part.

I put the wallet back in my front pocket despite the fact that nobody on the platform was willing to come within twenty-five feet of me.
Posted by Bagman and Butler at 1:30 AM