I didn't realize birds could do this

I suppose most animals do this but I had not thought about it before until I was sorting pictures this morning.  On Friday, I had actually gone out and spent a couple of hours just shooting...

BAGMAN:  "Finally!  I was wondering when you would break your addiction to your archive and finally try to shoot something new!"

...and I went over to Magnolia Cemetary thinking that I might use "Cemetaries" as my Friday Shootout Favorites this week.  Not that cemetaries are my favorite, but I had left a meeting early and...

BUTLER: "Your meeting was at a cemetary?"

Near a cemetary.  Anyhow, the sun was nice, it wasn't too cold, I didn't want to go straight home so I thought I'd see if I still remembered how to use the camera.

Anyhow, Magnolia Cemetary is an old historic cemetary near a wetlands and there was plentiful wildlife in addition to the expectedly plentiful nolife.   Among some other birds, I was stalking this white heron. 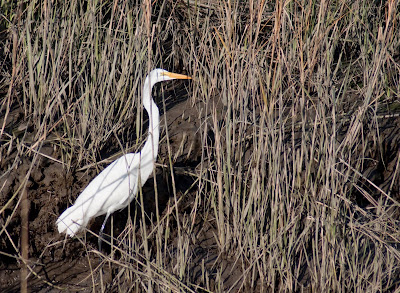 And when I was going through and cropping shots, I realized that I had clearly irritated the poor thing enough to raise the hackles on its neck.  Do birds have hackles?   Whatever the word, the two details below are of the same bird. 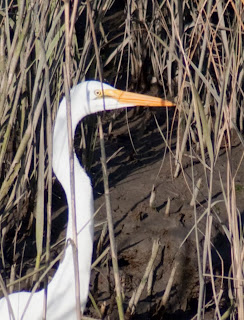 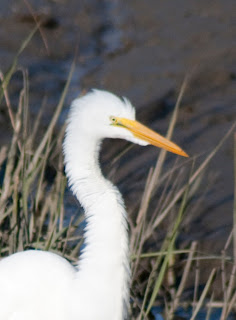 At first I thought it was the wind, but it was a very calm day.  At least I think it was.  I thought only cats and dogs did this.
Posted by Bagman and Butler at 1:45 AM