Yesterday was Presidents' day in the United States.   It is a holiday that used be called Washington's Birthday until the ongoing avalanche of political correctness in America rolled over it and we decided that it discriminated against other presidents.

In 1880 it was actually held on Washington's Birthday (February 22).  But in 1971 -- when Congress  apparently had little else to debate and people wanted Holidays to always fall on Mondays (except for Thanksgiving and Christmas) -- they declared it would always fall on the third Monday in February.  This means that it can fall anytime between February 15 and February 21.  A brilliant move since it will never fall on Washington's actual birthday.

And in Arkansas it's called "George Washington and Daisy Gadson Bates Day."

And nobody really knows whether it is spelled Presidents Day or Presidents' Day.

This year, we celebrated it as "Mark Should Paint the Stairs Day," which meant that I didn't get to celebrate it at all.

But by the end of the afternoon, decorated from head to foot with Oyster Shell speckles and drips, I looked down from the ladder and made one of the century's great archeological discoveries! 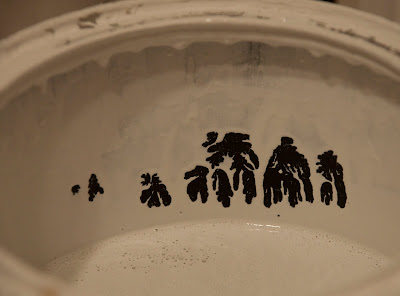 This prehistoric can painting is still being studied by archeologists who hope to extract DNA, but most experts think that it indicates early hominids with knowledge of Chinese Calligraphy crossing the Bering Strait in late Winter at the beginning of the Spring Thaw.  There is much contemporary debated about the small creature being attended to by the larger figure in the middle.  If the prehistoric paint tribes did bring penquins to the North American Continent, why is there no record of this?
BUTLER: "Too may paint fumes, Mark.  Take an aspirin and go back to bed."
Posted by Bagman and Butler at 7:22 AM