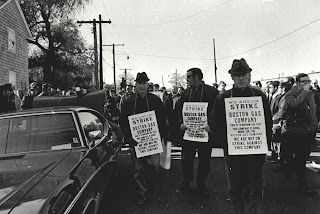 Periodically, when Blogspot isn’t devouring time like a dog that has just been given a cheeseburger from the table, I go through my old loose-leaf notebook of negatives. I scan some of them and yesterday I ran across a series of shots from a protest in in October of 1969. Not very good shots but they brought back memories! I shot them on a freelance assignment for The Cambridge Phoenix in 1969. They weren’t any better then because none of them made it past the photo editor.

I knew it was October of 1969 because I looked up the Cambridge Phoenix on Wikipedia and that was the month it was started and they were on a shoestring and looking at anything people with cameras brought in.

The photo editor was Peter Simon, brother of Carly Simon. I looked him up too and he seems to have done well for himself -- http://petersimon.com/ . I don’t remember him well except that he was clearly a good photographer and, mostly, I was hoping to meet his sister so she could fall in love with me. 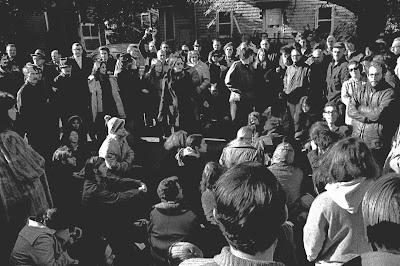 I also remember one afternoon when nobody was in the office, a run-down store front on . Since nobody was looking, Bagman sneaked a look into Peter’s negative files. There were several shots of a commune somewhere and everyone was dancing around naked. That’s when I decided he was a really good photographer.

Ah, the sixties. (Although when I drill down the actual dates, most of the things that characterize the ‘60s actually took place in the early part of the ‘70s. Go figure).

I was a journalism major and I minored in philosophy. I picked these majors for two reasons. (1.) There was less homework than engineering and (2.) I thought it might impress women.

My favorite philosopher at the time was Georg Hegel, although I always had points deducted from my papers because I kept calling him George. I liked his idea that philosophy evolved from a thesis and an antithesis, two conflicting beliefs (sort of like Bagman and ). By reconciling the common truths of a thesis and an antithesis, you arrived at a synthesis, a kind of higher truth. Manipulated correctly, I could almost always create a synthesis that included free love and sex. Philosophy was a great major! 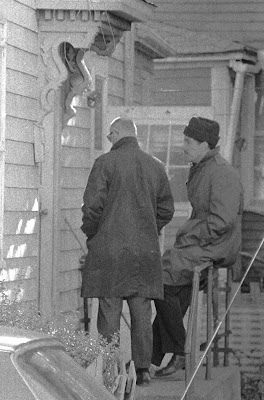 : You really need to remind everyone that this was in college and you did, eventually, grow up.

BAGMAN: Speak for yourself!

Politically, I was a journalist. This was useful too because I could go where the action was without alienating either liberal or conservative members of the fairer sex. It didn’t really work well in practice.

I loved the signs people carried. “Make love, not war” was my favorite. Of course.

“Question Authority” was another good one. We thought we invented the idea of questioning authority although I think it was being done at least as far back as the Pharisees. Although maybe we were the first to have bumper stickers.

And then there was “Never trust anyone over 30.” Or was it 40? I can’t trust my memory any more. Hey, maybe we were right!

None of this blog has explained these photos that were rejected by Carly Simon’s brother. It was a kind of double protest, staring with a strike by gas company workers and then joined by a group of Harvard professors and students who wanted to keep police from evicting a guy who owned a restaurant that they liked just because he hadn’t paid his rent for months. The nerve of the landlord!

It started peacefully and ended in a scuffle. I tried to get in closer to get a shot that Peter Simon might like and a cop told me to move back. I announced that I was a member of the third estate, working on an assignment for the Cambridge Phoenix! The scuffle then rolled in my direction and I stepped into it to get the perfect shot. But I never got it. At that point, by sheer accident, a cop kicked me in the ankle.

I never saw exactly which one had done it and I shouted, “Ouch! Hey! Be careful! I’m the press!” 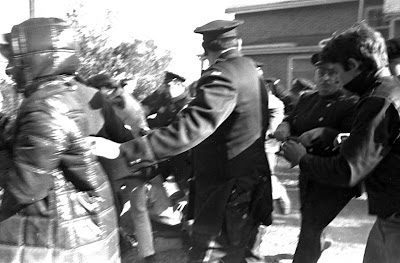 But the scuffle was over and I was hurting badly. The perfect opportunity. What could be more irresistible than a Hegelian journalist in need of sympathy and nurturing?

And it wasn’t until now, almost 40 years later, that the thought just came to me. I really don’t think it was an accident. I think the cop kicked me out sheer malice. And frankly, I can’t blame him.

Posted by Bagman and Butler at 4:00 AM