Yesterday, I read a wonderful blog over at the Explorer’s place where Lindsey finally convinced Barry to get his feet wet and it reminded me of my own mud-puddle story.

Wait a minute. Have I told this before? In the old days when I used to imbibe a bit, one of the telltale signs that I had over-tippled was a tendency to tell the same joke or story over and over again. Now, old age does the same thing, except my repetition of things is over months or years instead of every thirty minutes.

: You could always check the Blogspot archive.

Naw…I’ll push forward. I was living in at the time, working as a newspaper writer and photographer for a small liberal paper just over the mountains in a town called Newhall. My apartment was on in . It had little furniture and was littered with beer bottles.

I was in love with Judy Narita.

BAGMAN: You were in love with everybody.

: Don’t forget to remind everyone that you were single at the time.

But I don’t remember everybody’s name. And I even remember that this woman had a son named Matthew. Oh yes, and I was single at the time and had not yet met Karen.

Judy did not love me. But Matthew was four or five years old and she needed a baby sitter. I also had an old VW Bus and she needed transportation. So she let me hang around and be useful and once she let me kiss her on the cheek. 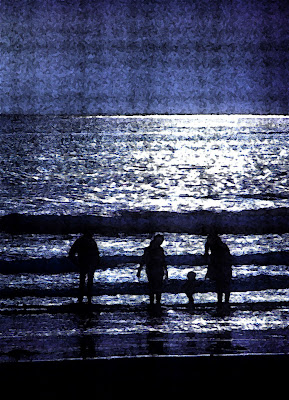 Tom, Somebody, Matthew, and Judy - Pacific Sunset - from old slide

She sold the L.A. Free Press, hawking it on near Grauman’s Chinese Theater. I’d drive her there, park, and take Matthew for a walk and try to entertain him. One day, after a heavy summer shower, he and I were up some alley that ran between two large buildings with no windows. It was almost eerie, with no cars and hardly any pedestrians. And a huge puddle near a blocked up storm drain.

Matthew and I were jumping around in it. Later I would probably take Judy somewhere and buy Matthew new socks and shoes. Yes, I had become very useful.

: You were a nice guy sometimes, even then.

BAGMAN: Bah! You were a sap!

Anyhow, behind us, a door opened in one of the windowless buildings and a tall, well-built man stepped out. He was dressed from head to boots in immaculate brown leathers that glowed in the after-shower sunlight. He had long hair and two days growth of beard. He strode over to the sidewalk where Matthew and I were cavorting and as he did so, his leather pants made a kind of swish-swishy sound. Matthew and I hardly noticed him despite the fact that 40 years later I claim to remember what his pants sounded like.

Matthew let out a gleeful shout and jumped into the puddle. I did the same thing. I can’t remember whether I tried to avoid splashing water on the man’s leather suit or not. Probably not.

He looked down at us for a moment, smiled broadly, said, “Far out, man,” and made a massive leap into the deepest part, splashing all of us. Matthew and I laughed and all three of us started jumping up and down splashing ourselves silly.

Suddenly at the top of the alley, a long silver limousine careened around the corner, zoomed down the hill, coming to a sudden stop beside us, and the man in leathers jumped in, saying “Far out, man,” again. And he was gone.

I was just thinking the famous words that ended every episode of the old television show, The Lone Ranger – “Who was that masked man?” – when a crowd of screaming, mini-skirted girls came chasing down the alley after the limousine. They were all screaming, “Jim Morrison! Jim Morrison!” And I realized that I had just had an encounter with celebrity without even knowing it. Jim Morrison, lead singer of the Doors. In fact, he later wrote the song, “Riders in the Storm,” based on that incident.

No matter. Matthew was already on the sidewalk getting ready for the next jump. And I was gradually becoming aware of how squishy my socks had become.

Posted by Bagman and Butler at 5:20 AM