Bagman takes off his seatbelt and shoots

So I’m driving along to work on Route 17 out of toward the new into . Shortly before the bridge is the Scotchman Gas Station and Convenience Store where I often stop to wake myself up with a Red Bull. They call it Scotchman, I suppose, because they want us to think it is thriiifffty. But everything costs too much there, including Red Bull, so I decide to pass on it this morning.

puts his hand on Bagman’s shoulder and says, “Easy Mr. B., he’s right to save a couple of dollars and he doesn’t need the calories either.”

Bagman goes berserk, shouting, “But I’ve conceded to the sugar free!” Then, without warning, he snaps off his seatbelt, grabs the camera and screams, “Let’s take pictures from a moving car!!!” 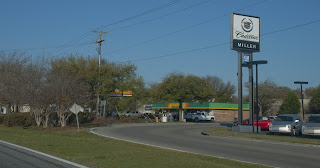 I’m going slow because there is a stoplight coming up, but I don’t like this one bit. I glance over but Bagman is already shooting. I start to tell him to put his seatbelt back on but is already wrestling him for it. Since FuManchu is only a two-seat sports car, and Bagman have to share the same seat and they are now rolling around on it as the light changes and I head up toward the Bridge.

“The Bridge! Take pictures of the Bridge!” Bagman knocks to the floorboard and takes another picture. 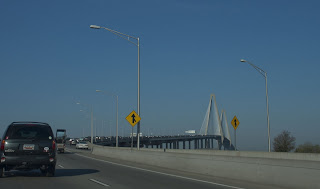 “Hold on just one minute!” I yell, knowing that I, as well as all the other cars, usually take the new bridge at between 70 and 79 mph. (Don’t tell the police, although I think they already know and sometimes – but rarely – set up radar). Although I’m screaming at Bagman too, I’m not really too concerned since Fu and I (sometime I’ll blog about why I named him “Fu Manchu”) know each other well and have even done some amateur racing together (another blog for yet another time).

Bagman is now standing straight up in the seat and I’m wishing I had listened to and kept the top up. Bagman is singing at the top of his lungs into the wind as we pass under the span. 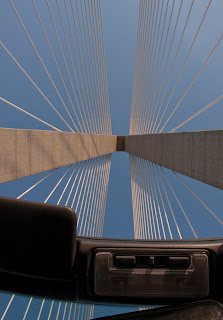 “I love to shoot from moving cars,

It’s better than drinking in the bars

If it were night we could shoot the stars

“La doesn’t rhyme with stars,” mumbles , his face pressed into the floorboard by Bagman’s foot on his head. Always the critic of rhythm and rhyme, I think. My thoughts are drowned out by cars honking angrily on both sides of me.

By now we are on the Crosstown and I’m hoping that Bagman is done. Or at least, since we’re not too far from my job, I’m hoping none of the cars around me are being driven by my colleagues who will give me a hard time about this. A woman passes on my right and gives me the finger. Who does she think she is, I roll my eyes. She's talking on a cell phone. I'm just taking pictures. I've seen people driving to work reading the newspaper!

Bagman is not quite done. “That church place!” He yells. “Let’s get a picture of the house where the guy has painted the side with religious stuff!” Unfortunately, it is on the other side of the road, so Bagman leans across the driver’s side to shoot it. Since I am in the driver’s side (because I am supposed to be driving), he leans across me and his huge barrel chest crushes mine and his thick beard gets in my eyes. My nose also figures out pretty quickly, unlike and myself, he didn’t shower today. Or yesterday. And probably not since last week. 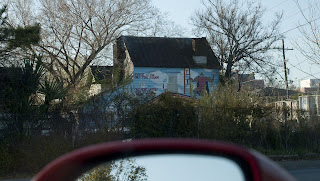 I’ve never wanted to get quickly to work so badly and, oxymoronically, driven so carefully and slow on the Crosstown before. Thankfully, Bagman has tired a bit already of this sport, the result of being refused his Red Bull. But he still takes two more pictures before I turn right after the hospital and into my parking spot. 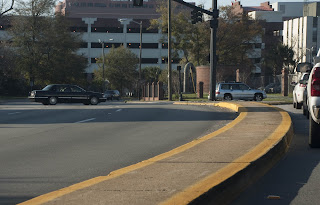 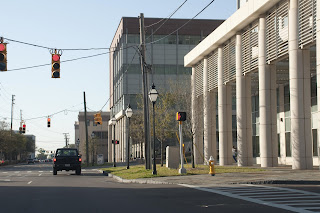 Stuffing the camera angrily back in the bag, I slam Fu’s door and stomp into the building where I work, ignoring Bagman and Butler who are untangling themselves and carrying on their usual debate. At the elevator, I run into Miles who looks at me strangely and says, "What on earth were you doing back there? I was sure you were going to sideswipe that schoolbus!"

Posted by Bagman and Butler at 3:26 AM