Okay, okay...I'm not sure if this is what I am supposed to do with Reggie Girl's invitation to a weekly shoot-out. Take a picture of people and paste in my blog? There was one picture I wanted to shoot out with, but I had taken it three years ago and I am guessing the purpose of the shoot out is to shoot something today. It was kind of hard because it was a busy day, but when I got home my son, daughter-in-law, and grandson were here checking emails since they haven't got their own computer yet...because they haven't actually got actual jobs yet. But that is another story and here is the picture I took. 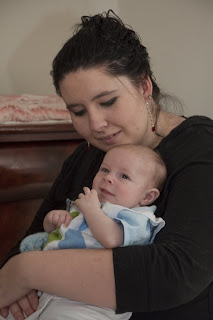 Did I do that right? Is this what the shoot out does? Or should I link it somehow to the official shoot out page. I get so confused by this blogger stuff!

Anyhow, since I'm was on a roll, I also risked life and limb by briefly posting a three year old shoot out picture. This was a dangerous one because it was of family members, all of whom would shoot me if they saw it in my blog. I was shooting a family wedding and had the regular nice posed smiling shots which they framed and put in albums. And when they saw this one in the proofs, they all demanded I delete it forever.

And most of the early birds who saw it last night (or yesterday in Australia) agreed. Sometimes discretion is the better part of valor. So this morning I had a brief ceremony and interred it in the computer graveyard known as "trash". RIP.
Posted by Bagman and Butler at 8:04 PM