I haven’t forgotten that am in the middle of a series. Actually, I am 75 percent of the way through a series. But I noticed that today was the birthday of Gabriel Garcia Marquez, Colombian author, who wrote 100 Years of Solitude.

I think he was one of the first authors from to gain a broader worldwide reputation. So I’m taking a one-day break – The plot for The Whale Novel that will never be written (yes, yes, I’m aware of Moby Dick) will be tomorrow.

BAGMAN: “Unfair! This is jus a ploy to keep me locked up and out of your blog.”

Yeah, yeah, whatever. Anyway, I think I loved 100 Years of Solitide, although it is hard to be certain because the 1970’s was a time when I sometimes loved things because I thought it would make me cool to love them. I made deeply literary critical remarks about new authors such as, “Far out, man.”

In any case, from the fall of 1971 to the spring of 1972, I went through a period of thinking that, instead of wanting to be Earnest Hemingway, I really wanted to be a National Geographic photographer. Of course, I never told National Geographic about this.

Not quite true. I did visit the in and mentioned it to one of the custodians there.

Convinced that this custodian would carry my message to the editorial staff and a check would be waiting when I returned, I went to with one of those antique cameras that used something called “film.” For about 6 months, I pretended to be a National Geographic photographer but, looking back, I must conclude that the real reason I was there was for the cheap cost of rum.

While in Santa Marta, I learned that the birthplace of Gabriel Garcia Marquez was a small village in the jungle north of there, I traveled up on local buses filled with people carrying live chickens and arrived in a small town where I made inquiries with my expertise in Spanish which consisted of a vocabulary of approximately 25 words most of which consisted of names for alcoholic beverages. 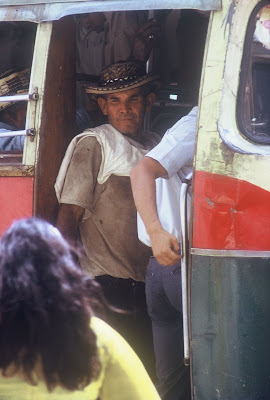 My experience there was incredible for two reasons. The first was that, although Marquez had gained considerable fame outside of , I was apparently one of the first Americans to show up with an interest in his birthplace. The second was the price of rum was even cheaper there than it was on the coast.

It seemed like, once the word spread, the entire town turned out to follow me around, everyone eager to tell me fantastic anecdotes about his childhood which would have made great copy for National Geographic if my Spanish proficiency had enabled me to understand anything they were saying. His neighbors invited me into their houses and gave me free rum. And more people showed up to follow me around.

Looking back, I think some of them were placing bets in a pool about how long I would be able to remain standing upright. And how much they could sell my camera for once I was peacefully asleep in the bushes behind his house.

I disappointed them and did not completely pass out until I was on the chicken bus back to where I finally came to, relieved to find my camera still around my neck. I guess chickens were more valuable.

Eventually, back in the States, I had my film developed. I was dismayed but not really surprised to find that 90% of the photographs were out of focus. Most cameras, today, now have autofocus. A bit of God’s ironic humor now that I no longer drink alcohol and can actually focus again.

But there was one that came out pretty well, so I’ll place it in this blog which may not reach as big an audience as National Geographic but which is more personal. I like that. 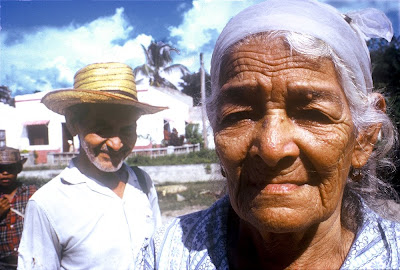 Because I am using my 62 year old memory to recall what this couple told me in Spanish that I could not understand and that I was concentrating on remaining vertical at the time, I’m not entirely sure…But. These folks were either his grand parents, his aunt and uncle, his neighbors, or the owners of the little shop that sold rum. I am pretty sure, however, that the little boy in the hat in the background ran the local black market, specializing in photographic equipment.

Posted by Bagman and Butler at 8:40 AM